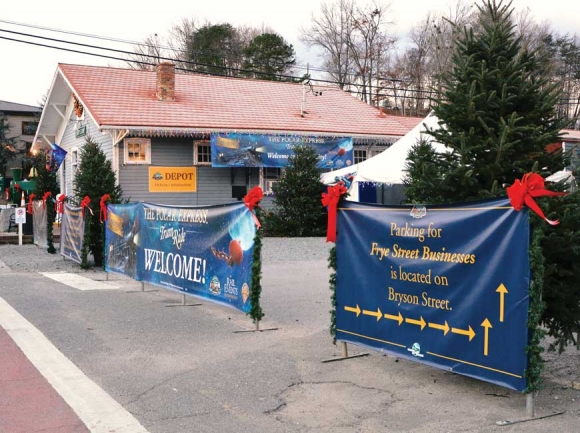 The Bryson City Board of Aldermen will revisit the controversial issue of permanently closing Fry Street near the train depot during an Aug. 9 public hearing. File photo

The Bryson City Board of Aldermen will soon revisit the controversial topic of whether to relinquish its right-of-way on Fry Street at the request of the Great Smoky Mountain Railroad.

Giving up the right-of-way would allow the street to be closed off to vehicular traffic between Everett Street and Collins Street. After receiving a letter from GSMR a couple of weeks ago asking the board to reconsider the closure, the board voted to hold a public hearing at 5:30 p.m. Aug. 9 at the Swain County Administrative Building on Mitchell Street.

The brief letter to the town from Kim Albritton, vice president and general manager of GSMR, did mention a pedestrian plaza project that was originally planned for Fry Street area several years ago, but she didn’t give any specifics on cost or financial contributions.

“The vision for the street redesign would include enhanced safe pedestrian walking paths, green space with grass, flowers and trees and covered public areas for both train and local community events. The park would be a central gathering location for the town,” Albritton wrote in the letter.

The town will also discuss the closure of Greenlee Street between Bryson Street and Fry Street after receiving a letter of support from a town resident Joe Sawyer back in March. As a resident of Greenlee Street, Sawyer wrote in the letter than he had witnessed the pedestrian concerns throughout the years.

“I also have a concern with the auto traffic on Greenlee as it intersects with Fry Street at my residence,” he wrote. “Along with the railroad’s request to close Fry Street, I wish to also have the portion of Greenlee Street from Fry Street to Bryson Street abandoned and returned to the original owners.”

The Fry Street closure has been a contentious topic of discussion in town since 2015 when the GSMR and the Swain County Tourism Development Authority proposed the idea of closing Fry Street to vehicles to improve safety for the thousands of pedestrians milling around the train depot before and after excursions. While the train owns the property, the town maintains the right-of-way, which would need to be relinquished to be able to close the street.

In addition to improving pedestrian safety, the TDA also proposed a plan to develop the area into a pedestrian plaza with trees, landscaping, an open lawn and a stage for live performances. The plan would also include paving the current gravel parking lot between the businesses on Fry Street for 35 parking spots. Such a project would cost between $250,000 to $400,000 according to TDA officials, but funding was never committed from TDA coffers or grants.

The community had mixed feelings about the issue — some saw it as a great idea to encourage visitors to stay longer in downtown Bryson City after their train rides, but others saw the proposed project as the TDA and town giving favoritism to one business over another. The closure of Fry Street would also mean several downtown businesses would lose several storefront parking spots — something they said would be detrimental to their business.

Other business owners thought the pedestrian plaza would be a great addition to downtown, but wanted to see a bigger financial commitment from the railroad since it would be benefitting their business.

In August 2015, the board of aldermen held a couple of public hearings at town hall regarding the right of way abandonment and pedestrian plaza idea. The small space could barely accommodate the 60-plus people who showed up with strong opinions on both sides, which is why the next public hearing will be held at the county administrative building.

Following the public hearings, the town board still couldn’t make a decision on closing Fry Street. The board did decide to close Fry Street temporarily from November through January for the train’s popular Polar Express excursions during the Christmas season. The temporary closure was meant to be a test run, but aldermen weren’t pleased with the results.

The train put up metal fencing with Polar Express Banners at the intersection of Fry Street and Everett Street to keep vehicles out, but businesses said the barricades made people think their stores weren’t open. Former Alderman Rick Bryson said at the time that he spoke to a handful of business owners who said the closure had negatively impacted their visitor traffic.

The board kept putting off a decision regarding the permanent closure, but finally newly elected Alderman Heidi Woodard-Ramsey made a motion to abandon the right-of-way during an April 2016 meeting. However, the motion died for a lack of a second, making it clear where the other aldermen stood on the issue.

Albritton was back before the town aldermen in April 2017 to ask if the board would approve another temporary closure of Fry Street during The Polar Express. The meeting was again packed, but this time most expressed support of the temporary closure because of safety issues. With more than 40,000 people participating in The Polar Express, about 700 people a night — including many children — are getting on and off the train on Fry Street.

The Swain County Chamber of Commerce even took out a full-page advertisement in The Smoky Mountain Times listing the names of 50 businesses and individuals that supported the closure. In a surprising 3-1 vote, the board denied the temporary closure with Woodard-Ramsey being the only one in support of it.

Not pleased with the town’s decision, Albritton responded by stating that she would explore all options to keep patrons safe — one of those options would be to move the Polar Express back to the Dillsboro depot this November through January.

The train’s statements about taking the Polar Express back to Dillsboro caused community backlash against the town board since the special excursions bring so much winter tourism to Bryson City. Aldermen quickly backtracked and decided to approve the Fry Street closure for Polar Express if the railroad would meet three stipulations — keep the gravel parking lot beside BoxCar Restaurant open to the public; not erect any event tents that would obscure visitors’ view of Fry Street merchants; and those merchants must be given a 30-day notice of the street closure.

The railroad complied and the temporary closure occurred without much fanfare. When it came time for the board of aldermen election that fall, there were several candidates who supported the permanent closure of Fry Street and the pedestrian plaza. Ben King, co-owner of Bryson City Outdoors, was one of those candidates and was also the highest vote getter in November. With a new face on the board, support for the Fry Street closure is now split with Woodard and King being in support and Aldermen Janine Crisp and Jim Gribble typically being against. In the case of a tie, Mayor Tom Sutton will have the deciding vote.