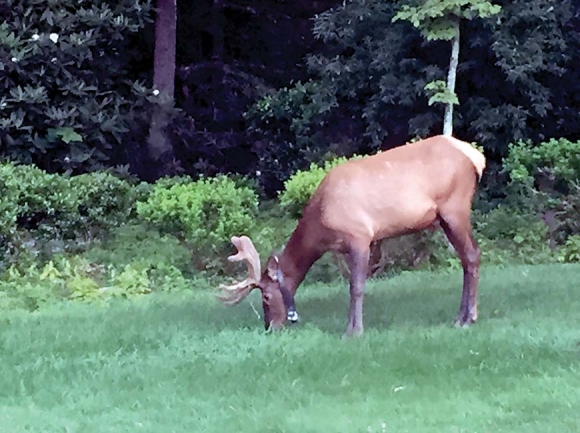 In full velvet, the young male elk looks for snacks in the yard of Bradley and Ibby Jones in Hendersonville. Bradley Jones photo

A youthful lark ended in tragedy July 1 for a Maggie Valley elk that trekked through the Pisgah National Forest to wind up in Henderson County.

The young bull’s travels ended when he wandered onto I-26 near Hendersonville, just before 5 a.m. Sunday, July 1. A woman driving a minivan struck the elk, and while nobody in the vehicle was injured, the elk was hurt badly enough that he had to be put down.

For the young male elk, the traffic accident was the final chapter in an adventurous couple of months that began when he decided to leave his herd in Maggie Valley.

“This guy around the middle of May left Maggie Valley and went to Waynesville for a little while, and then he went down toward Lake Logan and hung out in that area for a little while,” said Justin McVey, district biologist for the N.C. Wildlife Resources Commission. “Then he headed due east and eventually made his way over to the Etowah area in Henderson County and hung out there for several weeks. Then he started making his way through Hendersonville.”

McVey knows all of this because the elk was wearing a radio collar, which he placed on the animal back in October 2017, when the the elk was likely 6 to 8 months old. McVey was keeping an eye on the bull as he moved through the mountains.

“I checked on him on Friday the 29th (of June),” said McVey. “And he was there in a yard eating apples.”

While McVey was monitoring the elk’s movements, he didn’t attempt to relocate him back to the main herd, and following the traffic accident he’s gotten some heat for that.

“The question that I’m getting a lot is why didn’t we move him,” said McVey. “We didn’t move him for numerous reasons.”

The time of year and the elk’s phase of life had a lot to do with it. It’s been pretty hot this summer, which can be physically stressful for the animals — anesthetizing him under those conditions could ultimately prove harmful to the elk.

In addition, the young elk was in velvet — the term used for antlered animals like deer and elk that are still in the process of growing their antlers.

“The antlers are actually growing, and there’s blood vessels all through it,” McVey explained. “If you feel it, you can feel the warmth of the blood and you can feel a pulse. If we dart this bull and he goes off and runs into the woods, there’s a high probability he’ll break those antlers off.”

Breaking the antlers would open up a large number of blood vessels, leading to substantial blood loss and possibility of infection. Even if the bull were to go down without running off first, he would still have to be transported in a horse trailer once the anesthesia wore off, providing another opportunity for him to damage his antlers.

So, relocating him would incur some risk. And in McVey’s experience, wandering elk usually end up making their way back to the main herd.

“Every year we get reports of young bulls dispersing and moving around,” said McVey. “Years ago we had a bull come down from Kentucky. Though it’s not uncommon or unheard of for these bulls to disperse pretty great distances, in our experience they always seem to go back to the main herd.”

While this is the only such dispersal McVey has dealt with this year, other years have seen reports of a bull wandering out to Franklin and then down to Georgia, and of a separate bull making it out to Cashiers and then into Greenville, South Carolina. It’s common for young male elk to wander, and it’s also common for those same wandering elk to eventually decide it’s time to return to their home range.

“We figured he would follow suit and make his way back to the main herd,” said McVey. “Unfortunately things became a bit more complicated. I had reports of people feeding the elk, which of course made him more acclimated to people, less fearful of humans, thus less fearful of cars and human things, which may have led to him going out on I-26.”

While McVey was sorry to get that 5 a.m. call that the elk had been hit, he said that the elk population is doing well overall.

“We still estimate around 150 animals,” he said. “We think the population is pretty stable and pretty slow-growing. Each individual elk seems to be pretty healthy. Body conditions are good, and all those factors look good for the elk.” 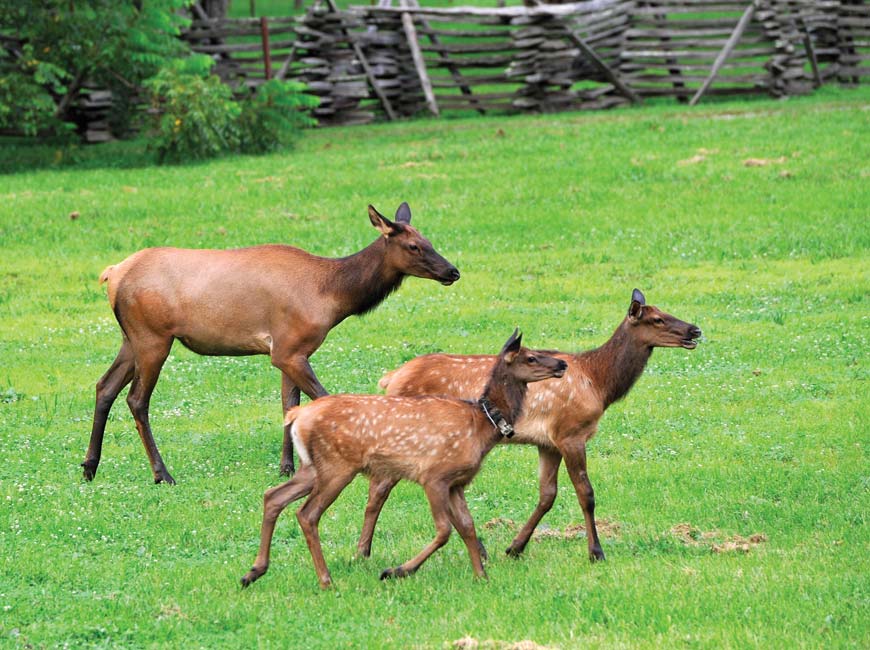 The initial herd of 52 elk released to the Great Smoky Mountains National Park in 2001 has since grown to about 150 animals split into multiple herds. Mark Haskett photo

The elk population is also getting some help from the William H. Silver Game Land, a nearly 2,000-acre Haywood County property that The Conservation Fund acquired over the course of several years and transferred to the Wildlife Commission in 2017. The Wildlife Commission has since completed substantial habitat work on the property using funding from the Rocky Mountain Elk Foundation.

Projects included clearing openings and planting them with a variety of grasses, leafy plants and other elk-friendly forage. This year, the Wildlife Commission started work to convert old skidder tracks into linear wildlife openings — reshaping roads, clearing out branches so sunlight can hit the ground and planting roadbeds with vegetation.

During a recent trip to the property, McVey said, he saw signs of elk and stumbled across an elk and her calf, also sighting a deer, grouse and black bear.

“They’re there, they’re using it, and as the habitat is developed and grown a little bit we’re going to see more and more elk use it,” he said. “They’re there already. It just takes a while for them to find everything there.”

The I-26 crash is only the second elk death reported in 2018, the other one being a female elk that died while giving birth. In 2017, the Wildlife Commission recorded eight elk deaths. The agency does not have any birthrate estimates but is currently involved in a project that will hopefully yield some numbers. The bottom line, though, is that while nobody is happy about how the story ended for the Hendersonville elk, overall the population is looking good.

“Population-wide it doesn’t matter too much,” McVey said, “but I was rooting for the guy.”