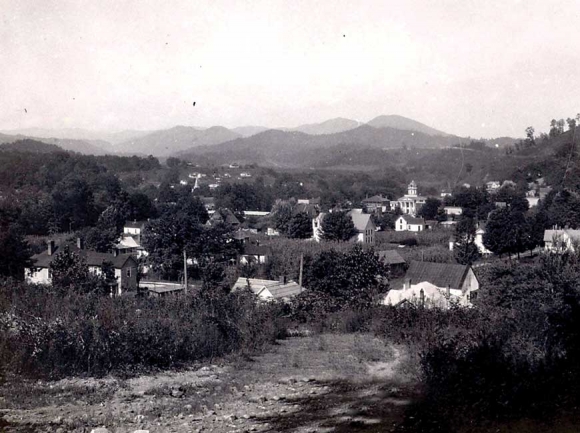 A view of Bryson City about 1920. WCU archive

Bryson City, the county seat of Swain, is situated 65 miles west of Asheville on the Murphy division of the southern railway, and is the commercial center of perhaps the richest timber territory of all of west North Carolina, so noted for its fine forests of excellent hardwoods. It is built on both banks of the turbulent, tumbling Tuckaseigee, which traverses it from east to west.

[Watch out ... here comes the purple prose!] The pure, invigorating water, distilled in the heavens and poured from cool clouds is percolated through the unadulterated terra-firma, and re-imbursed from many mountain springs, producing a health-building beverage that is conveyed by gravity to the inhabitants of Bryson. In the last few years about $20,000 has been spent on a waterworks system, which conveys this excellent supply of pure freestone water, from its freely flowing founts in the forest of the somber Smokeys. The supply is abundant and the quality unsurpassed, so that so far as Bryson City’s water is concerned she is unexcelled by any town of her size in the old North State.

The flume is no longer an experiment but has been proven a grand success, and the old way of hauling lumber, wood and bark down the streams on wagons or trams has passed and the flume is taking their place. The costs of constructing a flume is from $700 to $1,500 per mile and the capacity of a flume is to put the wood, lumber or bark in and the flume does the rest until the lumber is deliverable at the mouth of the flume on the railroad, sometimes this being a distance of 10 to 20 miles.

The timber alone would make a long story. It consists of oak of 20 kinds, poplar, cucumber, buckeye, lynn or basswood, maple — three different kinds — cherry, walnut butternut, hemlock, white pine, short-eave yellow pine, Bellwood, hickory, ashe, hum, elm, and many others; all of which are used for lumber. There are others such as locust, dogwood, etc. manufactured and put on the market.

The bark of the hemlock and some of the oaks are used for tanning purposes and bring a splendid price now and the price is rising constantly.

The chestnut wood, used for extracting the tanning acid, is found here in abundance …

The mining industries of this county are quite extensive, there being a large number of mines in operation at present.

The Carolina Clay company is working a China clay mine, two and one-half miles south of town with an output of two cars per week. This clay is used for making earthen table ware.

The C.J. Harris Clay company has a mine two miles north of town that has been running for four years with an output of two care per week.

The F.R. Hewitt Clay company at Almond, a small town, have been operating a mine there for four or five years and the output has been three cars per week.

The Hewitt Talc company, at Hewitt, a station on the Southern rail line south of Bryson City, has furnished the most of the high grace talc that has been used for the past five years. The mine has been in operation for at least fifteen years and is today the most valuable talc mine in the entire country.

The Nantahala Marble and Talc Company, with office at Atlanta, Ga. own some very fine talc and marble property … has been worked and considerable money made on the operation.

An expert in reporting on the copper deposits in Swain county, covering an area of 4,245 acres, says:

“My opinion is that the property owned by Mr. Moon in Swain county, North Carolina, as it stands today, is worth one million dollars, and with an outlay of from $100,000 to $200,000 in development work the value of this property could be doubled many times.

Kelley E. and Percival R. Bennett compose the Bryson City Drug company, the interior of whose beautiful store is shown herewith. Mr. Kelly E. Bennett manages the business, which is quite a signal success. Great care is taken in correctly filling physicians’ prescriptions. Beside this very important factor and feature of a down to date drug store, a splendid stock is carried of pure, fresh drugs, druggists’ sundries, toilet articles, soaps, perfumes.  An excellent soda water and ice cream service is also conducted by this very popular and successful business firm.

L. Lee Marr is the manager of the “Bee Hive Stone,” owned and operated by the above named firm, which is composed of three excellent gentlemen and splendid business men, Messers W. M. Reagan, L. Lee Marr and J.E. Coburn. They deal in general merchandise, dry goods, notions, groceries, furniture, hats, shoes, hay, corn meal, feed, in fact everything. They claim the biggest and busiest business in Bryson, and judging from their numerous customers, they are undoubtedly getting a very large share of the trade of the town and surrounding section of the country. Mr. Marr’s management of the “Bee Hive” has been eminently successful.

T.G. Pickleseimer is the mayor of Bryson City. He is rapidly rising young attorney and deserves to be, as he is studious, painstaking, courteous and honest. As mayor of Bryson City he has been popular and proficient. Mr. Pickelseimer’s term of office has been marked by a judicious expenditure of all public funds, and his re-election is almost insured.”

The above is a strong legal firm. It is composed of present Solicitor Thaddeus D. Bryson and Attorney S. W. Black, both able young lawyers. Mr. Black is one of the school trustees of BC. Bryson & Black have a fine law practice, doubtless due to their legal ability and great success in their chosen profession ...