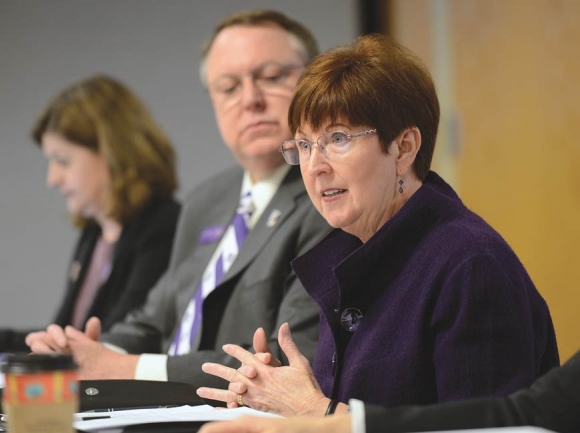 Pat Kaemmerling, co-chair of the Chancellor Search Committee and chair of the Western Carolina University Board of Trustees, speaks during a search committee meeting earlier this year. File photo

The Western Carolina University Board of Trustees has endorsed a slate of three finalists for the position of chancellor to be considered by University of North Carolina System President Margaret Spellings.

Approval of the trio of candidates came during the board’s quarterly meeting Friday, June 1.

In a closed session discussion as allowed by the North Carolina Open Meetings Law, the board considered the qualifications of three candidates recommended by a university search committee, which was appointed in December 2017 to conduct the search for a successor to Chancellor David O. Belcher.

WCU chancellor since July 1, 2011, Belcher announced last November his plans to go on medical leave effective Dec. 31, 2017, with no intention of returning to the position. He has been battling brain cancer since April 2016. Alison Morrison-Shetlar, WCU provost, has been serving as acting chancellor since Jan. 1.

By a unanimous vote, the trustees recommended sending the names of the three candidates — in unranked order – to Spellings, who will evaluate the finalists and put forward one name to the UNC Board of Governors for approval. In her charge to the committee in January, Spellings asked the group to work toward the goal of having a new chancellor on the job by mid-August.

At its most recent meeting on May 21, the search committee narrowed the list of finalists to three after inviting four candidates for campus visits and meetings with selected students, faculty, staff, administrators, alumni and community members earlier that month. Participants in those sessions were required to sign nondisclosure agreements to protect the confidentiality of the candidates.

“I want to express my sincere gratitude to the members of the committee for the many hours of hard work and dedication they have put into this process,” said Patricia Kaemmerling, chair of the Board of Trustees, who is serving as co-chair of the search committee along with fellow trustee Bryant Kinney. “I am also pleased to report that we have a transition team in place to help onboard the new chancellor and his or her family into the Western Carolina University family.” That transition team is being chaired by Bob Roberts, a WCU trustee.

The 22-member search committee is composed of members of the WCU Board of Trustees and faculty, student, staff, alumni and community representatives, and one nonvoting member from the UNC Board of Governors — David Powers, who serves as that board’s liaison to WCU. The group has been working with Lynn Duffy, senior associate vice president for leadership and talent development for the UNC System.

Among the first tasks tackled by the committee was to hold a series of eight forums in February in Cullowhee, Asheville and Cherokee to obtain public input concerning the characteristics participants would like to see in the WCU’s next chancellor.

Those forums helped the committee develop a leadership statement, a detailed document later approved by Spellings that was designed to attract highly qualified candidates to seek the position. The leadership statement resulted in applications from 70 qualified individuals, with 42 of those receiving additional screening and review, and 21 candidates recommended to the committee for its consideration.

The committee then narrowed down that list to 10 to invite to off-campus interviews held in Charlotte over a three-day period in late April. During those interviews, committee members asked each candidate questions incorporating themes and issues heard during the public forums. After those interviews, the committee selected four candidates for the campus visits in May.