Sense of time and place resonates throughout this novel 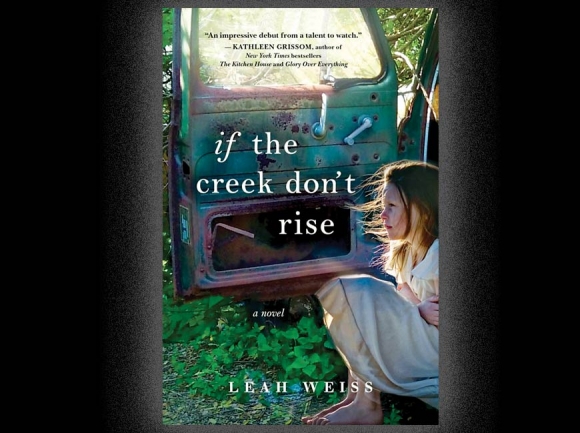 Sometimes a writer so imaginatively recreates a place and a people that the book becomes a time machine, sweeping us into the past so effectively that when we finish reading the last page we feel as if we truly have breathed the air of a different century.

In If The Creek Don’t Rise (Sourcebooks, 2017, 305 pages), Leah Weiss takes on one such ride into the recent past.

The people: ten narrators, including such characters as an old mountain woman who knows the ways of the woods and reads signs, a young wife-beating moonshiner with murder in his heart, a minister who wants to see the community grow and flourish, a teacher whom he recruits to help him in this quest, and Sadie Blue.

Sadie is the character at the heart of this fine novel of Appalachia. Raised hard by her grandmother — her father has died, and her mother deserted the family after Sadie’s birth — Sadie becomes attracted to Roy Tupkin. When she becomes pregnant, they marry on a whim, she moves into Tupkin’s trailer, and the beatings begin. Barely literate, left mostly to her own devices, Sadie tries to pick her way toward some sort of future that will take her away from this trailer and the savagery of her husband.

Others are struggling as well. Eli Perkins, the minister of the church in Baines Creek, has enticed a teacher, Kate Shaw, to the one-room schoolhouse where local bullies have already driven off several predecessors. Eli is a man with tenderness in his heart toward his ragamuffin flock, preaching the gospel but approaching the hard realities of their lives with practical advice and material help.

His sister, the appropriately named Prudence Perkins, is the opposite side of the Christian coin: shrewish, spiteful, judgmental of those who like Sadie have fallen and of newcomers like Kate. Prudence is more burden than blessing in her brother’s life.

Kate is a finely drawn character who is facing her own trials. Dismissed from a prestigious all-female academy down east for helping one of her students procure an abortion, she now has her hands full trying to teach children of all ages in a battered schoolhouse with few of even the most essential supplies: books, paper, pens and pencils.

Like so many good teachers, however, Kate is determined and persevering, drawing more and more students to the school by her relaxed teaching ways. She takes Sadie under her wing, not only helping her learn to read and write, but inspiring her to look for her interior gifts and for a brighter future.

Born in North Carolina and raised in the foothills of Virginia’s Blue Ridge Mountains, author Leah Weiss clearly and accurately depicts a part of life during a time when great change was coming to Appalachia. Today’s visitors to our mountains and perhaps younger natives may be unaware that places like Baines Creek — and there were many such places — helped inspire the federal government’s War On Poverty. Begun in the 1960s, and continuing in many ways today, the government sought solutions to end the rampant poverty, the lack of opportunity, and the poor education throughout Appalachia.

In If The Creek Don’t Rise, Weiss shows us Appalachia on the cusp of this change. Her descriptions of the dirt-poor privation of so many of these people, the bad diet, the lack of meaningful work and educational resources, and the concomitant violence, alcohol abuse (drugs had not quite reached the mountains yet), poor health, and despair: these are not fictions. They were a living, breathing reality for many, many people in these hills.

Weiss also shows us that this War On Poverty will change the lives of the native people in unforeseen ways. Kate Shaw, and though he himself is hill-born, Eli Perkins, are pioneer agents of this change, bringing the outside world into Baines Creek. The days of moonshiners like Roy Tupkin and his sidekick, Billy Barnhill, are numbered, though in real life these two criminals might have transferred their dubious talents to running drugs and opioids.

Birdie Rocas is the ancient mountain woman skilled in woodcraft, herbal medicine, and reading signs in nature. Trained long ago by an old Cherokee, Gray Wolf, and now watched over by another loner, Tattler Swan, Birdie lives alone with a crow, Samuel, who rides on her shoulder when she walks through the woods. Some of her neighbors consider her a witch, but when facing medical emergencies or solving mysteries, it is to Birdie that they come. She is the last of her kind, a “granny-woman” who delivers babies, brews curative teas, and speaks to the birds, talents and knowledge that will vanish with her death.

Weiss’ novel is an intricately plotted and fast-paced story of love, violence, redemption, and death. She is particularly adept in her use of shifting perspectives, moving effortlessly from one character to another.

If The Creek Don’t Rise also pinpoints the beginning of the enormous changes in Western North Carolina almost 50 years ago. Weiss has not only given us a fine novel, but a study of a culture that would soon, for better and for worse, vanish.

High marks for this one.