A penny for your thoughts: Fee increases keep Waynesville taxes down 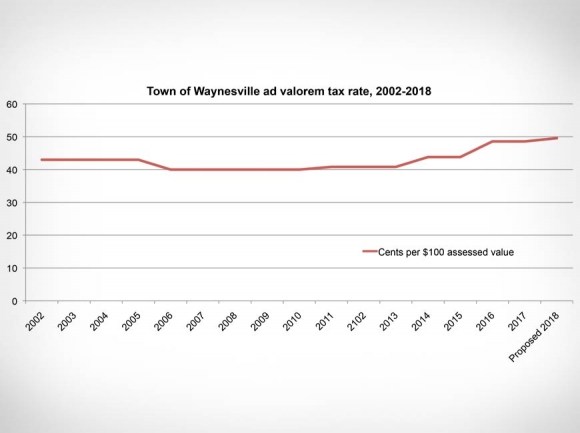 The Town of Waynesville is about to embark on year two of a more conservative budget mindset; the days of 7 percent annual growth are gone, but the days of rising costs are not.

Most any town’s major budget expense comes in the form of personnel. Waynesville’s $15.2 million general fund sees a full 64.5 percent of expenditures directed toward personnel.

The combination of the two is driving a 3.3 percent increase in general fund spending over last year, and has led to a proposed 1 cent ad valorem property tax increase, the first in Waynesville since the 2016-17 budget year.

“As you approach a 50 cent tax rate, you begin to look at how much more impact are we going to give the general ad valorem taxpayer versus beginning to charge more directed fees at the users who use that service,” said Waynesville Town Manager Rob Hites.

Property taxes aren’t the only way in which municipal governments can gather revenue, and towns like Waynesville are now more fully utilizing user fees rather than continuously upping the tax rate every year.

“For me it’s not a mask to deliberately make the tax rate look lower, it’s a matter of spreading the cost of services to the people who are using them,” Hites said. “What I’m trying to do and what other towns try to do is to balance the impact of various methods of revenue collection.”

Hites explained that user fees are often times more popular not only because they’re oriented directly at the people that are using the service, but also because the revenues generated are intended for the people in the budget who are doing the regulation.

Allowed by the legislature for decades now, the obscure fee is again gaining interest.

“When I first started out in the 1970s, the vehicle tax was limited to about five dollars, and if you were in that business you gave people this metal sign that said ‘Waynesville’ and screwed it to the front of your car,” he said. “The problem with that was the tags are made by the prison system, so each one cost us about $2, and the legislature said you can’t collect but $5.”

A lot of towns felt that for just $3, the whole scheme wasn’t worth the trouble, so some years back the legislature changed the statute to allow a vehicle fee of up to $30. HItes’ proposal of $15 would generate an estimated $147,000.

“Lord knows we’re not getting enough money from the gas tax to keep up with street maintenance,” Hites said. “So the first $5 is targeted towards law-enforcement, and then the $10 is oriented to street maintenance.”

Were that spending not generated by the vehicle tax, it would necessitate another 1.3-cent tax increase on top of the proposed 49.57 cents per $100 assessed value.

“One big challenge for us is that we’re a tax base in a town of 10,000 that expands to a town of about 18,000 for almost six months a year now, and growing,” he said, referring to the area’s second home owners and growing year-round tourism season (see Tourism, page 12). “So these type fees help.”

Hites had also proposed a stormwater fee of about $2 per home, per month that didn’t quite make it into the budget in time this year, but will likely come soon.

“I would say in North Carolina most cities have a small vehicle fee, a stormwater fee, they’re now charging for garbage, and then of course the ad valorem tax,” he said.

On the spectrum of low-tax, high-fee cities and high-tax, low-fee cities, Waynesville is not especially fee-heavy despite its small size, according to Hites.

“Towns that have significant industries, their taxes drive a lot more income,” he said.

This year, a penny’s worth of Waynesville’s property tax rate is valued at $115,000, meaning that for every penny taxes are raised, an estimated $115,000 is generated.

In Statesville, where Hites previously served as manager, a penny’s worth is almost $240,000. Statesville’s population is more than twice Waynesville’s.

In Charlotte, a penny on the property tax rate is worth about $2.5 million.

“For towns like that they can just go out and purchase 16 police cars like it’s a walk in the park,” Hites said. “For us, we have to borrow money.”

Fees help keep taxes lower, but in the end the only difference isn’t how much money is generated as revenue, it’s who pays.

“When you mix their bowl of fees and taxes,” he said, “they’re going to pay about the same amount as we do.”

Both the FY 2018-19 budget and the proposed vehicle fee must be formally adopted by the Waynesville Board of Alderman before implementation.

The next Waynesville Board of Aldermen meeting will offer residents a chance to weigh in on three issues of note.

The first is the proposed fiscal year 2018-19 budget, which calls for a 1-cent tax increase. The board may vote to adopt the budget at the close of the public hearing, but still has time to hold a vote June 26 if necessary.

The second is a proposed fee of $15 for vehicles registered in the Town of Waynesville. The proposed fee could change from $15 to anywhere between nothing and $30, at the pleasure of the board.

The third is a revenue-neutral provision requiring taxicab operators to obtain a permit for a nominal fee of $5. The proposal does not include limousines, small busses or ride-sharing services like Uber and Lyft.