This must be the place: Chasing the American Dream of Breakfast 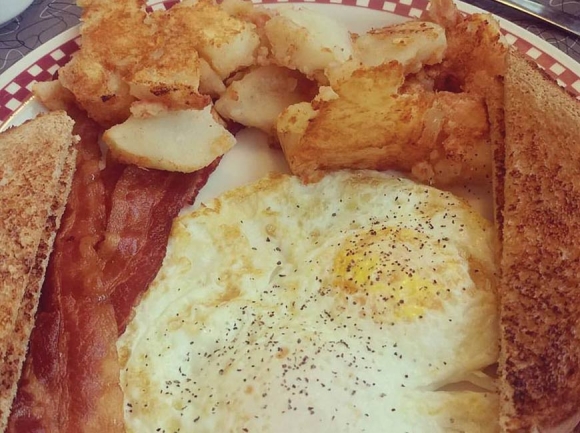 It’s the only way to eat breakfast.

Two eggs, two slices of toast (cut into four triangular pieces), a side of meat, a side of hashbrowns or homefries, a cup of coffee and the day’s newspaper alongside. It is, quite literally, the American Dream in a meal.

But, over the years, that dream has come under attack. Not by foreign entities, not by the debate over whether eggs are healthy, not even by the always-intimidating Sunday brunch. But the sabotage comes at the hands of its creator, the American culinary industry.

The sabotage in question is a single slice of toast.

A decade ago this past week, those words above kicked off a feature article I wrote for the Teton Valley News, a tiny newspaper in the tiny mountain town of Driggs, Idaho. The story was “Chasing the American Dream of Breakfast: Tracking toast in Teton Valley.” What was meant as a truthful and lighthearted tale of why every breakfast establishment in Teton County (there were three) only served one slice of toast in their breakfast dishes molded itself into a full-fledged community uproar, forever changing my trajectory as a journalist.

I was 23 years old. This was my first writing gig out of college. I’d been living and working in Eastern Idaho since early January 2008. And this was before the economic recession would hit the country that fall. So, there I was, running around the high desert prairie of the Rocky Mountains, interviewing and photographing all kinds of wild and wondrous characters — ranchers, blacksmiths, barbecue pit masters, pro skiers, etc.

As someone who holds breakfast and breakfast foods above all culinary times and delights, I’ve always stuck by my bacon, eggs, toast and homefries. Born and raised in Upstate New York, the idea of the diner is such a fixture of my youth and adolescence. Going to a 24-hour old-school diner for a greasy spoon breakfast is a big deal up there, such a routine part of the day (or night once the bars close).

The servers didn’t know what to say or do with me, while the owners simply scoffed at my complaint:

“It was two slices until about two years ago,” said Stewart Chisholm, general manager of the Milk Creek Grill in Driggs. “The cost of food has gone up so much. Flour has gone up almost 200 percent in the last six months, and my food costs have gone up 8 percent in eight months.”

I remember being at my desk in the newsroom of the Teton Valley News and mentioning this weird phenomenon to my co-workers. Most just listened for a hot second and went about with their day, but one reporter encouraged me to make a story about it. Thus, I started making some phone calls, slowing going down a nationwide rabbit hole to find an answer to my concern.

“That is just shocking,” said Richard Gutman, director of the Culinary Arts Museum at Johnson and Wales University in Providence, Rhode Island. “As far as I know, the standard has always been two slices cut into four triangular pieces. This is unbelievable. There is symmetry involved with breakfast and one slice just throws the whole meal into whack.”

“I’ve never heard of one slice,” said Michael Karl Witzel, the American-culture guru and author of The American Diner, over the phone from Texas. “There are two holes in a toaster for two slices of toast. Why make one? You need more than one. One for the yolk and one for the jam. Down here they serve two slices, and it’s Texas Toast, nice and thick.”

And then the story got published and hit newsstands around Teton County. Initially, folks found it a funny piece, then others started to take offense. I never meant any harm with it, but soon all these people going into those three restaurants started requesting a second slice for their breakfast plate. The movement had taken flight, and now was completely out of my hands.

At one point, a week or so after the article was released, I was eating in one of the establishments, and as my breakfast was placed in front of me, another plate stacked high with about 10 slices of toast was also dropped onto my table: “Is that enough toast for you?” the owner sternly said from the open kitchen window. A cook from one of the other spots yelled at me from his passing pickup truck as I was crossing the street: “Fuck you and fuck your toast article.”

Nowadays, I still get texts from friends of their breakfast plates and if the portions are correct. I eventually left Teton County in early September of 2008, the exact week the economy tanked, as I watched several Wall Street institution collapse on my four-day road trip back to New York.

And it was the “toast story” that changed everything. Once back in New York, I was at a crossroads. The economy was demolished and I wasn’t finding much (or any) work in journalism. Do I go back to graduate school to become a teacher or do I keep pushing ahead in my dream of being a writer? And just as I was about to mail out my grad school applications, I heard word from my old co-workers that the “toast story” had won the 2008 Idaho Press Club award for “Best Light Feature.” The news refilled my tank. I figured I’d give this writing thing another shot.

1 The Cherokee Bluegrass Festival will return June 7-9 at the Holiday RV Village and Campground in Cherokee.

3 The “Art After Dark” season will continue from 6 to 9 p.m. Friday, June 1, in downtown Waynesville.

4 The Jackson County Public Library will host the Liberty Baptist Church Choir for a concert at 6:30 p.m. Thursday, May 31, in the Community Room in Sylva.