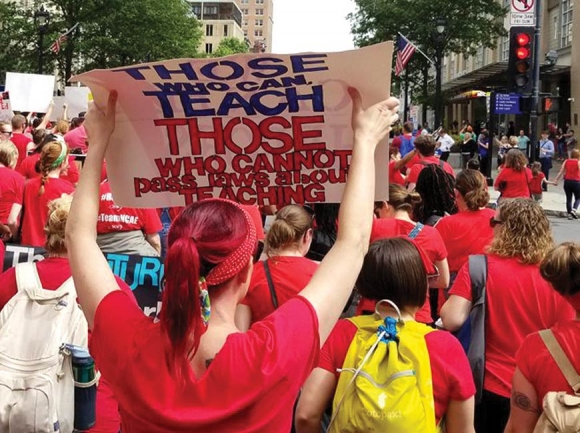 An estimated 15,000 educators took to the streets in Raleigh May 16 to rally for more funding for public education. Donated photo

As thousands of North Carolina teachers descended on the state capitol last week demanding more education funding and better pay, Haywood County’s legislators say progress has been made, and more is coming, but politicizing the issue neglects other state employees who are just as critical to the state’s success.

“It wasn’t about a pay raise, it was about politics,” said Rep. Michele Presnell, R-Burnsville. “In general, that’s what it was about.”

Teachers in North Carolina are poised to receive their fifth consecutive pay raise from the General Assembly with the passage of the state’s new budget, but are still below the $38,617 national average starting salary reported by the National Education Association for the 2016-17 school year.

“We continue to give them raises. It’s going to be a while before they get up to the national standard, but it’s coming,” Presnell said.

North Carolina’s average starting salary is $37,514, according to the NEA, placing it above all neighboring states except Virginia’s $39,398.

Presnell said that Republicans inherited a state in financial disarray when they took control of the General Assembly in 2010 after more than a century of Democratic domination, one reason for the discrepancy.

Rep. Mike Clampitt, R-Bryson City, said that conservative control of the legislature is what has made those raises possible in the first place.

“The thing is, the state had been into almost bankruptcy, if we remember back in 2009, the state had to furlough individuals, [and] they could not give pay raises,” Clampitt said. “So we have been fiscally responsible in the state house to take care of some debt and come forth with a good business climate. As you’ve seen recently, several large corporations are now considering coming to North Carolina, which will help us with the tax base and therefore because of that help us make other raises available.”

And, according to Presnell, there are plenty of hands out.

“We’re getting there, but there’s other state employees,” she said. “It’s not just teachers. How about the State Highway Patrol that put their life on the line every single day when they get up and put their shoes on? They are very important. Highway patrol, correctional officers — there’s a lot of other state employees that are there. They want a raise, too.”

Clampitt said that while the march was “impressive,” it was also unsettling in that it resulted in the cancellation of school for what he said was about a million students. Like Presnell, Clampitt stressed balance in how the state divvies up resources.

“So teachers aren’t the only ones, but they have had the most attention in the last six years,” he said. “We’re going to have to start sharing the toys, and the sandbox and the playground, so to speak.”

Both Presnell, in her third term, and Clampitt, in his first, are seeking re-election in the November General Election, where they’ll both face the same opponents they bested in 2016. Not surprisingly, Democrats Rhonda Cole Schandevel and Joe Sam Queen feel differently about the issue than the Republican incumbents do.

“Isn’t it time we start listening to the 20,000 teachers that moved to action instead of the few politicians that say they are providing teachers all the resources that are needed?” asked Schandevel, who lost to Presnell by more than 10 points in 2016.

Schandevel said that teachers “see with their own eyes” resource levels available, and as caretakers of future leaders, they ought to get what they’re demanding in order to stave off “further erosion of a once highly-regarded system.”

Queen, who will face Clampitt for the fourth time in November, said that strong public schools are the foundation of any democracy and ensure opportunity for everyone, not just the wealthy.