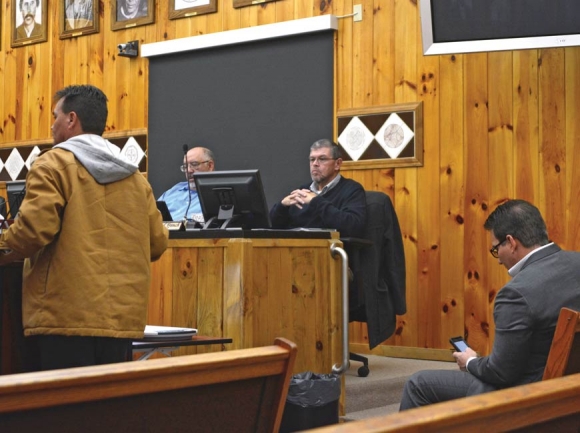 “The investigation confirmed exactly what we had stated from the outset,” Sneed said in a statement to The Smoky Mountain News. “As I have done throughout my term in office, I will continue to focus my energies on diversifying the tribe’s revenue streams, creating opportunities for enrolled members and bringing efficiency and fiscal accountability to our tribal government.”

The investigation stemmed from a 2017 settlement agreement that ended a lawsuit claiming that former Principal Chief Patrick Lambert’s decision to fire the seven plaintiffs following his 2015 election was unlawful.

The plaintiffs — Brandi Cooper, Mollie Grant, Mark Kephart, Jason Lambert, Donna Owl, Kimberly Peone and Cory Blankenship, who currently serves as secretary of finance — said that Lambert made “false and defamatory statements” about them and that he intentionally inflicted emotional distress on them, but Lambert filed a motion to dismiss the charges, arguing that sovereign immunity protected him from suit in his official capacity and that there was no basis for a claim against him in his individual capacity.

The court granted some of Lambert’s motions to dismiss but denied others, keeping the suit alive. Both sides appealed portions of the ruling to the Cherokee Supreme Court. By the time the case made it that far, the 2015-2017 Tribal Council had voted to remove Lambert by impeachment, and Sneed was the new principal chief, meaning that he now occupied Lambert’s place in the lawsuit.

The parties eventually decided to settle, with a signed agreement from Oct. 9, 2017, outlining terms by which the plaintiffs would receive a total $525,000 subject to Tribal Council’s approval during its meeting on Nov. 2, 2017. However, Tribal Council was never presented with the proposed agreement, and two business days after the Nov. 2 meeting a new settlement document was completed, listing an amount one-third higher than the original agreement. This document stated that the plaintiffs should receive a total $698,000 and did not stipulate that Tribal Council approve the payout.

Some Tribal Council members were concerned when talk of the settlement reached their ears, with the issue first discussed publicly in December 2017 when Councilmember Lisa Taylor, of Painttown, asked Sneed to “squelch publicly” the rumors she’d heard of $75,000 payouts. The next month, Councilmember Richard French, of Big Cove, introduced a resolution seeking to investigate the legality of those payouts. Council voted unanimously in favor of it.

The resolution stated that Tribal Council should retain an outside entity to “conduct an investigation to ensure Chief Sneed ‘[complied] with policies, plans, procedures, law and regulations’ regarding the Blankenship, et. al. v. Lambert settlement.” It also directed the investigator to find out when the tribe’s fiscal management policy was created, updated and amended; from which line item the settlement was paid; the settlement date; individuals paid and check dates; and prior precedent for how settlement payments should be handled.

In addition, the resolution said, “investigation findings may be made public as long as it complies with the Cherokee Code Chapter 132, Public Records.”

The tribe retained Hendersonville-based Elite Private Investigations to complete the investigation. While the job is now complete, the report has not been released — only the press release from West.

According to the press release, in July 2017 the Cherokee Supreme Court encouraged the parties to “explore possibilities outside of litigation” to settle the lawsuit, and the parties then participated in a mediation on Oct. 9, 2017, resulting in a settlement dated Oct. 30.

The press release further states that checks were cut to the plaintiffs’ law firm Carpenter Guy & Arnold, not to the individual plaintiffs, with two check dates because of an error by the insurance company — Nov. 30 and Dec. 7, 2017. The fiscal management policy was last updated June 29, 2017, it says, and the only approval it requires for line-item transfers is approval from the Planning and Analysis Office. The settlement was paid out of the Lawsuit Settlement line item.

While the resolution requesting the investigation was clear that the purpose was to look into the legality of Sneed’s actions in settling the lawsuit, the press release does not mention Sneed by name or specific actions by him. It states that “the investigation findings helped ease the concerns” of some Tribal Council members regarding the settlement payout but does not explicitly say what those concerns were.

“On that investigation report, I’m hearing the questions that are important to this entire issue were not even addressed,” Lambert said via text message.

“Remember this was NOT an investigation of Patrick (Lambert) and why certain people were fired or reassigned 2.5 years ago … but it is instead a underhanded payoff deal orchestrated as a settlement using tribal money to enrich friends and political supporters,” Lambert continued.

Tribal Council’s next meeting will be Thursday, June 7, with Council possibly discussing to what extent the report could be made public at that time, though no agenda for the meeting is yet available.