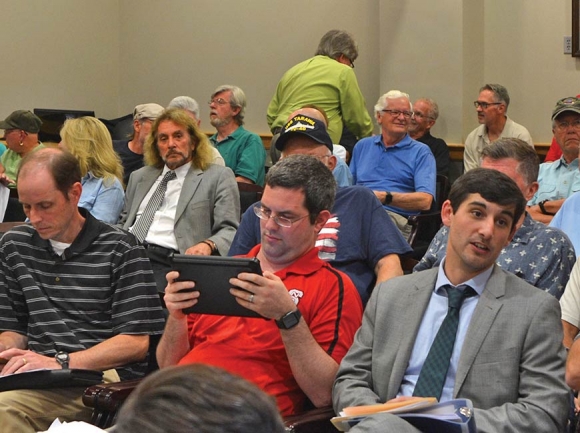 It’s rare to see great interest taken in the meeting of a municipal planning board, but a contentious proposal that would allow for apartments on a semi-rural piece of land on the outskirts of Waynesville has ignited a debate not only about the future of the 41-acre parcel on Plott Creek Road, but also about the future of the community as a whole.

Developers say the 200-unit complex is what the town needs. Neighbors strongly disagree. Although the town’s planning documents currently allow for substantively similar developments on the parcel, at the crux of the issue is the unfortunate stigma attached to residents who would rent — and not own — the proposed units.

And as town officials consider the past and future of the area, the fight is far from over.

The parcel itself is located just west of the Great Smoky Mountain Expressway and south of Plott Creek Road; between them is Hazelwood Elementary School.

It’s an idyllic, pastoral setting with historic farmhouses and luxury homes scattered about the rolling hills of the Plott Creek Valley, where North Carolina’s State Dog, the Plott Hound, originated some two centuries ago.

The area’s zoning designation, however, has oscillated between low and medium density since its inception around the turn of the last century.

Carved out of another district in 2003, the Plott Creek Neighborhood Residential District originally allowed multi-family use until revisions eliminated that use in 2011.

Multi-family dwellings are defined by the town as a building or portion thereof containing three or more dwelling units on a single lot, where each unit has a separate entrance from the outside or through a common vestibule.

Townhomes, however, are defined as three or more attached dwelling units in which each unit has its own front and rear access from the outside, where no unit is located over another unit, and where each unit is separated from any other by one or more vertical common fire resistant firewalls. 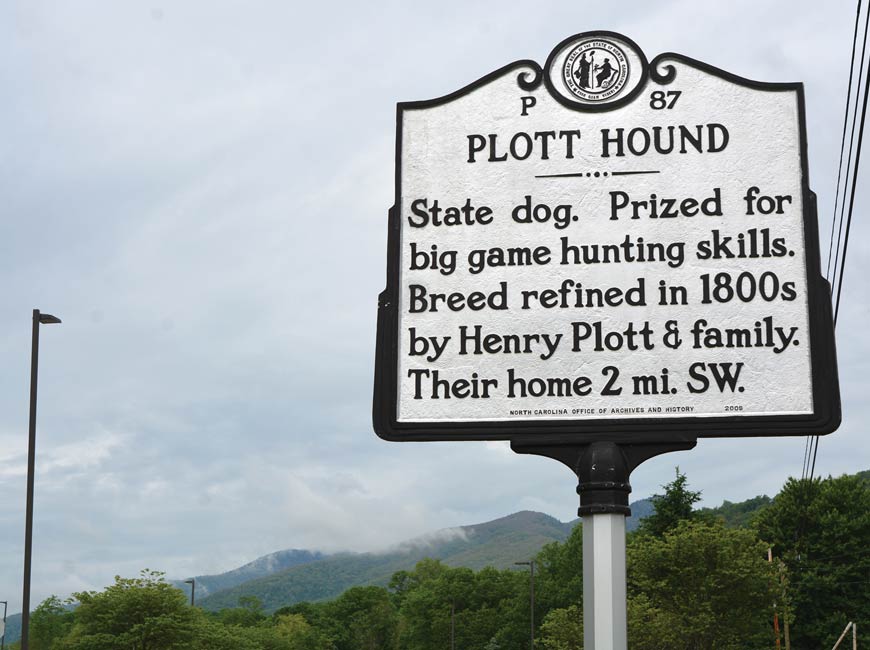 At issue, say neighbors, is the semi-rural character of a historic part of Waynesville. Cory Vaillancourt photo

The most important distinction, however, is that with townhomes, the land underneath each unit is titled to the unit itself. A multi-family dwelling would likely be titled to a development or management company.

In this case, that’s Gastonia-based Southwood Realty Company, which on April 24 applied for a text amendment to the Plott Creek Neighborhood Residential district that would allow multifamily dwellings.

“We’re a family-owned company started by my grandfather,” said William Ratchford, vice president of Southwood. “We are the largest owner of apartments in Western North Carolina with a presence in the area dating back to 2001 in Henderson County.”

Southwood has an option to purchase the parcel, presumably contingent on getting a favorable ruling on the proposed text amendment. If it is successful, plans include a 200-unit apartment complex on the site.

“We’re not big-city developers looking to come in,” Ratchford told the Town of Waynesville Planning Board May 21. “We build units and products in small towns that cater to the town with the workforce housing that is often needed for a town to survive and bring individuals who can be teachers, firefighters or policemen.”

The units, according to Ratchford, would be little different in size and scope from developments featuring townhomes, which are currently allowed in the PC-NR district.

“The apartments we can build more expensively,” he said. “We put more costs into the units themselves because we have a lower cost under the roof line. We put in 9-foot ceilings, crown molding and granite countertops. We can make a fair argument that our apartments that have stone and brick look better than the Centex home communities right beside them.”

Ratchford addressed the Planning Board in support of his application, and in doing so attempted to diffuse what he supposed would be the four biggest arguments against his proposed text amendment.

Traffic would indeed increase in the area by about 50 percent, according to J.M. Teague Engineering’s traffic engineer Jason Fulton.

“Currently I would have to look at my reports to tell you what we counted, but the DOT says there’s 2,500 cars daily on that stretch of road,” Fulton told the Planning Board. Fulton added that the apartment complex would generate 1,300 more cars daily, and add a new peak period — the 4 to 6 p.m. commute — to existing peak hours based on pickup and drop-off times at Hazelwood Elementary, where traffic is busiest from 7 to 9 a.m. and 2:30 to 3:30 p.m.

“Most developers do not build one bedroom townhomes,” he said. “It’s just not normally an efficient thing to build, therefore townhome communities of similar size will naturally have more traffic than an apartment community.”

That carries over to another concern — school overcrowding — as well, per Ratchford.

“As a 200-unit apartment complex, because of the nature of the housing, one bedrooms usually have considerably less children than a townhome or housing development, so there’s less impact on schools,” he said.

As for environmental impact, the three-story apartment buildings allow for greater cost efficiency, construction-wise, than townhouses do, meaning less land can be disturbed on a project.

The final concern, and often most contentious aspect of any proposed development, is density of units per acre, but in this case the PC-NR district allows far greater density than what Southwood plans to use.

“The project we’re proposing the density is less than five units an acre,” Ratchford said. Current zoning allows for at least 10.

“There’s not a piece of land in Plott Creek unless you combine several properties that could be 200 units or more,” he told the board. “So if we’re not here for density, what are we here for?”

As the Town of Waynesville’s Development Services Director, Elizabeth Teague plays an important role in any planning decision that takes place within the town.

In this particular case, Teague had to research the issue and decide first and foremost whether or not the proposed text amendment was consistent with the town’s comprehensive plan.

Adopted in 2002, the plan, titled, “Waynesville: Our Heritage, Our Future 2020 Land Development Plan” provides a framework for future land use as defined by community input.

“The overall land-use school [of thought] that was adopted back in 2002 states that the town would promote the orderly growth, development and enhanced land values in the town by preserving and improving Waynesville’s existing neighborhoods, creating more attractive commercial centers, maintaining a strong downtown area, and taking steps to reduce urban sprawl and protect the natural beauty of the community,” Teague told the board. “Additionally it says we should provide an attractive range of housing opportunities and neighborhoods for all residents of Waynesville.”

That plan lays out where higher density residential development should go — near the core of the city — and where it should transition to medium or low density, near the outskirts.

It is perhaps this conspiracy of geography and zoning that might explain why PC-NR allowed, then disallowed multi-family housing and why a developer thinks it’s worth the effort to again seek it as a permitted use on the parcel.

After going through planning board minutes and board of aldermen minutes from years back, Teague said she couldn’t find any discussion specifically on that point.

Adding to the ambiguity, Teague during her research discovered a troubling inconsistency. 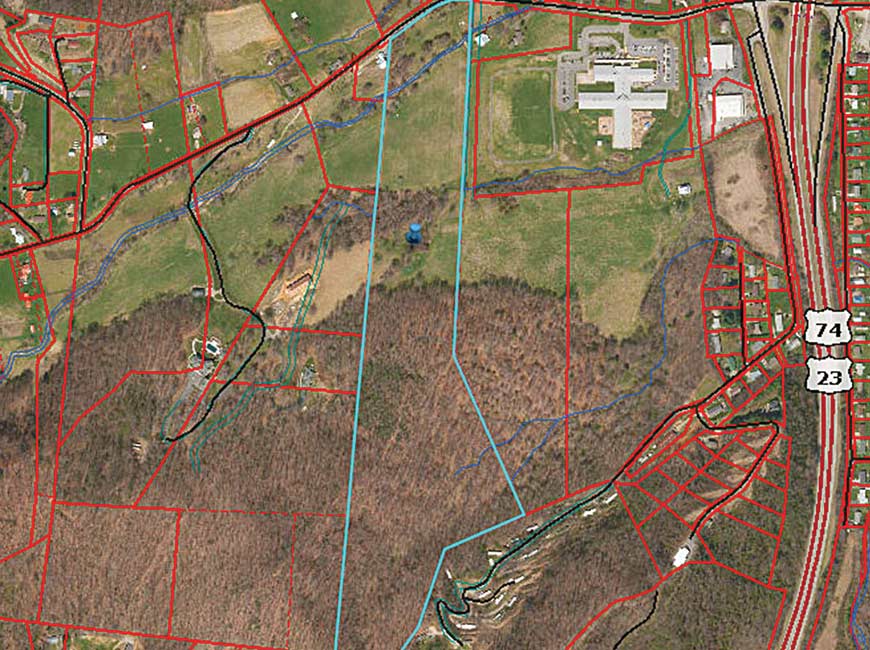 In this case, the zoning ordinance expressly permits apartments in all neighborhood residential districts, including Plott Creek — a remnant of the time when it was permissible. But the town’s table of permitted uses says apartments aren’t allowed in PC-NR or the Sulphur Springs Neighborhood Residential District, an artifact from when the use was removed.

Bearing all that in mind, Teague found the proposed text amendment to be “consistent with our land-use plan map and our stated goals.”

Furthermore, Teague said, projects of the type proposed by Southwood are sorely needed.

While the proposed development isn’t strictly “affordable housing” as defined by most — that which costs less than 30 percent of one’s income — it is what Teague has termed “workforce housing,” which while not bargain-basement is also not ultra-luxurious.

“The problem is, there’s not enough reasonably priced housing,” Ratchford said after the meeting. “I talked to The Mountaineer [newspaper], had multiple conversations with her and she said with an entry-level reporter they say, ‘You’re hired, good luck finding entry-level housing.’”

Teague summed up her presentation to the planning board by saying that “allowing multi-family within this particular district actually is a strategic way of handling a specific need that we have.”

After almost an hour of hearing from Teague and Ratchford, the more than 100 people who’d piled in to town hall board room and spilled out into the hallway for the planning board’s public hearing finally got the chance to do what they’d come to do, and do it they did — by throwing everything but the kitchen sink at the proposed text amendment.

Not a single supporter other than applicant Ratchford spoke in favor of the project during the public comment session, but 15 residents opposed it for reasons both practical and philosophical.

Alan Schork, retired from the commercial real estate industry, said he represented a large group of homeowners opposed to the project. When his time came to speak, he asked those in opposition to the measure to raise their hands; pretty much everyone did.

But it was local attorney and Plott Creek resident Chuck Dickson who raised the economic connotations surrounding renters.

“Multi-family use inherently leads to more transient use, and I would submit, not as much pride of ownership or pride of place as single family homes,” Dickson told the board.

Ken Hollifield, who lives on Plott Creek Road, said that he was concerned about property values declining.

Al Dana identified himself as a former law enforcement officer who specialized in child sex crimes, and said putting a 200-unit apartment complex right next to an elementary school was “asking for trouble.”

The sum of those arguments suggests that people who are unable or unwilling to purchase a single-family home in PC-NR and instead rent will lower property values and prey upon children.

Ratchford said that a recent survey of approved applicants at similar properties in Western North Carolina showed median income of just over $40,000 an applicant, well above the county’s $33,000 median household income.

Board member Marty Prevost, a Realtor, asked to abstain from voting and to recuse herself from the matter; Board Chairman Patrick McDowell asked if she had a direct financial interest in the project.

She said no, and should have voted, but unofficial minutes from the meeting say she didn’t.

Ginger Hain and Jason Rogers voted against both motions, which passed. Hain said she thought the matter would be best handled during the town’s currently transpiring update of the 2020 plan, which will bring land use planning in Waynesville up through the year 2040.

Southwood’s request, however, was scheduled to go before the full board of alderman May 22, as The Smoky Mountain News was going to print.

If aldermen accept the recommendation of the planning board, the developer would then be free to apply for a permit to create a multi-family development on the parcel.

Residents who opposed the project, however, seem to be undeterred by the planning board’s vote.

“We’ll be back,” Dickson said.

Look for more about this story in next week’s issue of The Smoky Mountain News, on stands and online Wednesday, May 30.