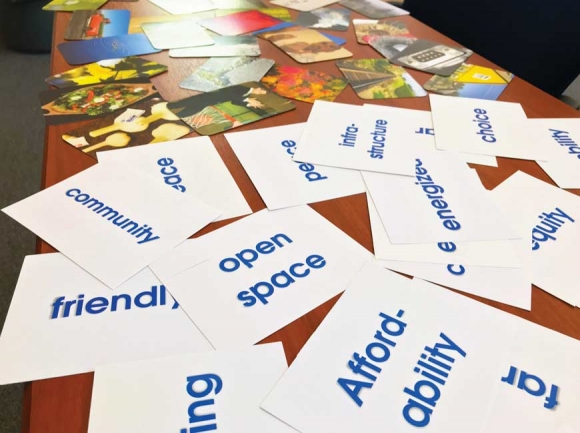 Failing to plan, as it is often said, is planning to fail.

To that end, state statutes require municipalities to create a comprehensive plan, which the Town of Waynesville did for the very first time in 2002.

Titled “Waynesville: Our Heritage, Our Future 2020 Land Development Plan,” the 129-page document was the result of a mammoth multi-year effort to engage all quarters in the community and then lay out what the town might, could or should look like by 2020.

Stipulations in the plan pertain to almost all decisions made in the town’s planning, zoning and infrastructure decisions and hold long-standing implications — like where hotels and gaming parlors can be located, for example — so much so that the plan is updated every 20 years to ensure that the vision of tomorrow doesn’t get lost in the day-to-day developments of a changing community.

Today, the town’s next comprehensive plan is well underway and judging by the results of the previous one, not every need or want will be satisfied when it’s again time for a new one in 2038. But as is also often said, it’s time for the public to speak now on the future of Waynesville, or hold their peace for another two decades.

Comprehensive planning is one of the most substantial undertakings any municipality of any size will ever undertake.

“It tells us where we want to be protective, where we want to see town growth. It looks at land use and infrastructure, in other words, where we have the water and sewer to support growth,” said Waynesville Director of Development Services Elizabeth Teague. “But it also looks at other issues such as public health, the economy and jobs, and also how we create more opportunities for local families in terms of jobs and housing.”

Teague will play a critical role in guiding the process of creating the plan, which is expected to be presented to aldermen in draft form in about a year. The town has also engaged Stewart, Inc. to help shepherd the plan along.

She’s no stranger to the process, which she jokingly outlined at a recent board of aldermen meeting as a squiggly, meandering line on a chart that doesn’t reach its goal in a straight line, but does eventually get there.

A steering committee has already begun meeting and is currently occupied with establishing a preliminary framework. Unlike last time, the existing plan’s strengths and weaknesses will be factored into the new plan.

“We’ve got a good comprehensive plan already in place, so we’re trying to look at that and ask ourselves what’s working and what’s not,” she said.

Some of the goals in the current plan didn’t work, or were never tried, like rebuilding Frog Level’s train depot and creating a town square setting, establishing a substantive public transportation system or converting the problematic Francis Farm landfill to recreational use.

Other goals have seen both recent and ongoing progress since 2002, when the 2020 plan was formally adopted — cooperative water and sewer service, for example.

Many goals, however, have become reality and have greatly benefitted the town. Parking improvements in Frog Level and Hazelwood are an important accomplishment of the 2020 plan and serve as economic drivers in conjunction with the stated goal of paying more attention to the small business districts that lie outside the town’s well-known downtown core.

Probably the best known and most visible accomplishments of the 2020 plan are the reutilization of the old Hazelwood School — now the Folkmoot Friendship Center — and the effort to bury overhead power lines along Main Street.

While not all challenges in development can reasonably be predicted over the next 20 years, a number of recent decisions by the board show the importance of laying out standards with certainty, so developers and business owners can see all the cards on the table — the Nudge City gaming parlor formerly located on Dellwood Road, for example.

No zoning classification existed for such businesses until just recently, because their proliferation couldn’t be anticipated.

Similarly, issues that didn’t exist in 1999 do today, and identifying them will be a large part of the planning process.

“What are the emerging issues we need to address, and how do we identify goals and action items we need to work on?” Teague said.

One of those, which was outlined in the 2020 plan but hasn’t yet borne fruit, deals with what is probably the most important advancement in the history of human civilization.

“A piece of infrastructure that’s really new since the last plan is telecommunications and broadband,” she said. “In today’s economy we recognize that’s essential for growth.”

Just as electricity, sewer and water were major advancements during the early part of the last century, high-speed internet has become an unforeseen essential that must now be considered right alongside those basic needs most of America takes for granted.

Another recent development has been a boon to the state as well as the region, despite no one really being ready for it.

“One new thing is what we would call the ‘brewery phenomenon,’ and the fact that we have a very successful set of brewers here that create jobs and economic opportunity,” said Teague. “So are we adequately supporting that as a growth area within our rules? Are there other types of small manufacturing — maybe it’s soda, like the Waynesville Soda Jerks — are we supporting this light manufacturing and retail that’s growing in North Carolina?”

Light manufacturing and small-to-medium sized businesses are the name of the game today, and any small town still pining for the bygone era of the large manufacturing plant does so at its own peril.

“Every so often you’ll have a big corporation looking for a manufacturing location, but the big fish, the whale that crates all those jobs, they’re few and far between,” she said. “So where we’re seeing economic growth is in the smaller businesses, people working from home, the online community.”

The comprehensive plan’s steering committee has just drafted an online survey, which will be posted in the coming weeks, and a project website is under development as well; all will build towards a planned community workshop in June.