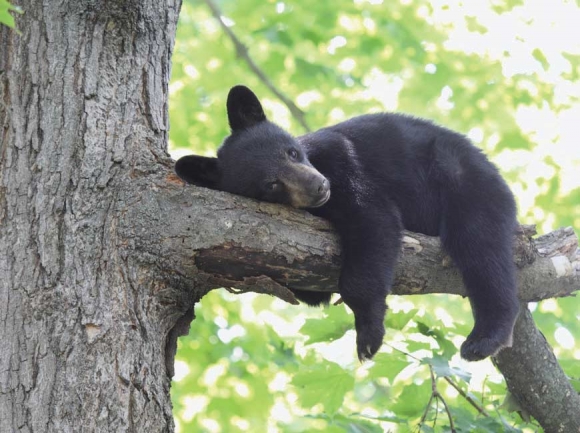 Editor’s note: This column first appeared in an April 2003 edition of The Smoky Mountain News.

Bears have always held a special attraction for human beings. In a chapter titled “Killing the Sacred Bear” in his monumental study The Golden Bough: A Study in Magic and Religion (1922), Sir James George Frazer traced the reverence for bears among the Ainu people of Japan and the Gilyats in Siberia.

The Ainu thought of the bear as the “kamuni” (god) of the inanimate forces of nature and considered themselves to be bear worshippers. Among the Gilyats, the bear was “the object of the most refined solicitude of an entire village and plays the chief part in their religious ceremonies.” Nevertheless, both the Ainu and the Gilyats killed and devoured bears with impunity.

Frazer concluded that the ancient hunter could “not afford to spare all animals” and were forced by necessity “to overcome his superstitious scruples and take the life of the beast. At the same time he does all he can to appease his victims and their kinfolk. Even in the act of killing them he testifies his respect for them, endeavors to excuse or even conceal his share in procuring their death, and promises that their remains will be honorably treated.”

The ancient Cherokees of the Smokies region knew the black bear as “Yanu.” The term “Yanu Agisi” referred to a female bear, while “Yanu Achvya” was the designation for a male bear. According to anthropologist James Mooney, the author of Myths of the Cherokees (1900) who lived in the Big Cove community of the Qualla Boundary (Cherokee) during the late 1880s, they also recognized a special “variety known as ‘Kalas-gunahita’ or ‘Long Hams,’” an individual “with long legs and small feet, which is always lean, and which the hunter does not care to shoot, possibly on account of its leanness.”

I’m of the opinion, however, that ‘Long Hams’ wasn’t shot because his lean torso, long legs and small feet made him look too much like a person. His appearance was more human than it was ursine.

In The Southeastern Indians (1976), anthropologist Charles Hudson observes that for the ancient Cherokees, “Men and animals were not sharply separated, worlds apart, as they are in our thinking …. But even though men and animals were interrelated, men were still set apart. Above all other animals, the bear represents the nature of the division between people and animals. According to a Cherokee oral tradition, bears are descended from a Cherokee clan who decided that they would prefer to live in the company of animals where they would never go hungry rather than face the toil and uncertainties of human existence.”

The clan that became bears told their human relatives: “When you yourselves are hungry come into the woods and call us and we shall come to give you our own flesh. You need not be afraid to kill us, for we shall live always.” But “Long Hams,” if my interpretation is correct, looked so much like a fellow human that the Cherokees simply left him alone. He was the exception to the rule.

As Arlene Fradkin points out in Cherokee Folk Zoology (1990), “The belief in the human origin of the bear was most probably based upon its ability to walk upright on two legs and the similarity of its tracks to human footprints.” It might also be pointed out that to the non-trained eye the bones in a bear’s forepaw so closely resembles the bones in human hands that the Federal Bureau of Investigation once issued a bulletin detailing the differences.

Accordingly, the Cherokees assigned human traits to the black bear and chronicled its quasi-human social activities in their myths. The great White Bear was their chief.  He lived at a place known as “Kuwahi” or “Mulberry Place,” which was located near a lake with medicinal powers in which wounded bears could bathe and recover. The townhouses of the bears were thought to be located under various high peaks in the Smokies. In these towns the bears assembled for councils and held dances, as did the Cherokees in their above ground rituals.

Fradkin notes that most bears, excepting perhaps “Long Hams,” were killed with impunity because the Cherokees had a firm belief in their powers of reincarnation. In one tale a bear “was resurrected to its proper form from the drops of its own spilt blood.  In another tale, a bear was allotted seven lives and was repeatedly killed by hunters until it finally died its last death.”

So you go hiking alone in the Smokies some day soon. You round a sharp bend in the trail on a high ridge and hear snuffling sounds in the underbrush. The bushes shake. A black form arises slowly on its hind legs and turns to face you. The bear extends its front legs like arms in your direction. You have encountered the true wild spirit of the wilderness, Yanu, the sacred animal that walks like a man.