Where local and global meet 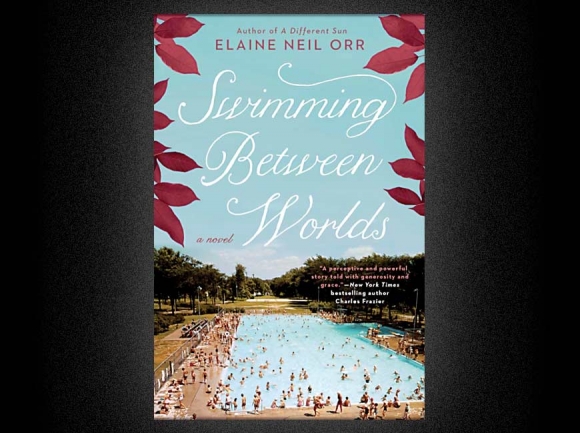 Do I have one for you! Elaine Neil Orr’s Swimming Between Worlds was recommended to me by Wayne Caldwell and got my further attention after reading Charles Frazier’s endorsement “[Her book is] a perceptive and powerful story told with generosity and grace.” How could I refuse? The review copy arrived in the mail and I was into it the same day. If the cliche “I couldn’t put it down” ever applied to a book of fiction, it certainly applies to this book.

I’m sitting here writing this review with a rash of superlatives floating around in my head. Let me try and calm down by telling you that Elaine Neil Orr is professor of English at North Carolina State and teaches literature and creative writing. She is the author of four previous books. And she grew up in Nigeria.

That said, her brand new book Swimming Between Worlds is set in Nigeria and in Winston-Salem — just right down the road and not terribly far from where she is living now. So, she is, as the saying goes “writing about what she knows,” which is always a good sign for any potential reader. Not only is she writing about what she knows, but she is writing with amazing clarity and dexterity. Combine those two things with a story line that is as compelling as it is culturally appropriate for our times and you’ve got the formulae for a page-turner. And I’m here to tell you that this book is a page-turner.

The book begins in Winston-Salem in 1959 with “Ain’t That a Shame” by Pat Boone playing in the background introducing us to the character of Tacker, a high school football superstar and town hero who has ended up after college being hired by a firm building much-needed schools in Africa. We are quickly transported from Old Salem to Nigeria in a flashback that informs us as to why we find him back in Winston-Salem and working at his father’s grocery store. From here and for the next 375 pages Orr takes us back and forth between Winston-Salem and Nigeria as a means of developing the through-line of her story, which is the beginning of the Civil Rights Movement and the lunch counter sit-ins in Winston-Salem and Greensboro in late 1959 and 1960 — a story of race, racism, culture and counter-culture as told by someone who has been there and knows this history intimately.

Soon we meet the other two main characters who, at center stage, move this story along: Gaines, a black man and black activist organizer who Tacker saves from a violent attack by a local redneck and his father and then hires to help him in his father’s store, and Kate, who will become Tacker’s important love interest. Not wanting to give away too much of this interior historical drama slash love story filled with details, flashbacks and memories which moves fluently from memory to real time with an ease that is almost dream-like, let me just say that Orr’s cinematic time-warp editing will take you on a journey you’re not likely to forget.

With the story moving stylishly in leaps and bounds via smooth transitions, we revisit the era in North Carolina history when the lunch counter sit-ins in Winston-Salem and Greensboro were making national news. Orr takes us to the Woolworth’s lunch counter and puts us right onto the stool. We hear the racial epithets (“We don’t want no integration.” “Send those niggers back to Africa.”) and feel the blows delivered by the local white bigots.

We hear Gaines’ thoughts as he expresses himself on matters of integration to Tacker. “We have founded the Student Nonviolent Coordinating Committee. Over in Raleigh. At Shaw University. Yes, sir. We’re moving. This thing is rolling, man. We’re moving, but not out of Winston. We’re moving out of oppression.” From here we follow the progression of the Civil Rights Movement in North Carolina and across state lines — to South Carolina, Atlanta and beyond.

But while all this socio-cultural history is being played out, an engaging love story is going on between Tacker and Kate, both of whom have baggage that they are trying to navigate through while being pulled into each others’ orbit. Both of them are shy but for very different reasons, and the love story moves slowly yet elegantly in Orr’s hands until we ourselves are feeling the pangs and exhilarations of mutual attraction. “Tacker hadn’t kissed a woman in a good while. It was a grave thought, and at the edge of it was the scent of rain.” And then this pensive moment from Kate: “She harbored the thought that in some secret shadow life they were each other’s muse.” And then there are references to places and songs that filter sonically through the branches of this love-tree: “From some other time-space continuum a single line of song wavered —Who do you love?”

As a place-based novel, these two story lines are couched in exquisite detail in terms of local color allowing the reader to quite literally enter into the space, the place, of this book as evidenced in this description of a motorcycle ride on Tacker’s Indian Chief through a part of Winston-Salem. “Mid-July, Winston was thick green, shade beneath trees, so deep it looked like water. One evening, Tacker lifted Valentine onto the Indian and took her for a ride, West End to Hanes Park and around it and then Reynolda all the way out to Wake Forest College and back, and then they stopped on the bridge where Glade empties onto Hawthorne, Peters Creek flowing beneath. They picked up pebbles and threw them in, one after another. Back on the bike, they headed uphill so he could show her Kate’s house. They climbed her yard steps and reached the porch and rang the doorbell, but no answer. Tacker turned the cycle around and let the bike glide back toward West End.” I don’t know about you, but I think our author knows her landscape pretty well. And has a talent in describing it. There are many such passages in this book. Some more poetic than others, but all imbued with information that just draws us further and further, deeper and deeper into this book’s localism and seductive story line.

In the end, and with an unexpectedly sad yet brilliantly finished ending, Orr’s book left me like Elvis’ song “All Shook Up.” While this novel may have been the most fun of any piece of fiction I’ve read in many years, it was also the catalyst for the biggest cry I’ve ever had reading a book. No French ending here. Sad, but with a brilliant resolution. While Tacker may have moaned about “the soles of his shoes complaining against the floor” earlier in this story, I, on the other hand, found myself rejoicing at story’s end — with tears streaming down my face.

Thomas Crowe is a frequent contributor to Smoky Mountain News. His novel The Watcher (Like Sweet Bells Jangled) was published in 2015. He can be contacted at This email address is being protected from spambots. You need JavaScript enabled to view it. .

• Reading and signing at Blue Ridge Books in Waynesville. 4 p.m. on Tuesday, May 1.