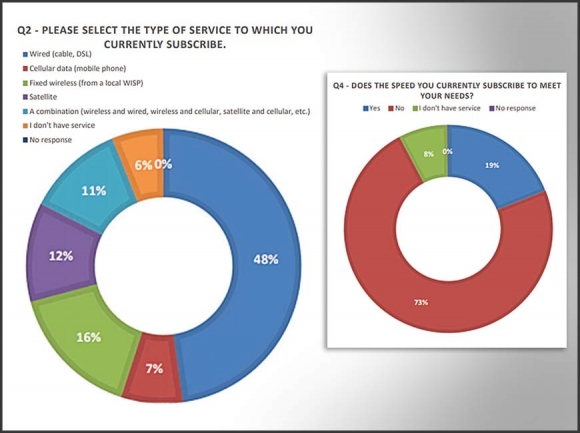 With the results of a regional broadband survey now available, leaders have expansive data on the underserved areas in their counties and can seek out public-private partnership opportunities in an effort to expand high-speed internet service.

The lack of fast and reliable broadband service in Western North Carolina has been a high priority for the last few years with no easy solution in sight to serve such sparsely populated mountain communities. Providers have been unwilling to install new infrastructure in areas where they are unable to get a return on their investment, leaving many communities without reliable service or with no service at all.

Internet service used to be a luxury but now it’s a necessity for economic development and public education. Many counties already have broadband committees in place and some have even completed their own surveys, but this survey and assessment of internet availability covers the seven western counties and also included training for county officials. The Southwestern Planning and Economic Development Commission conducted the assessment in partnership with Mountain West Partnership with the help of an Appalachian Regional Commission grant.

For the assessment portion of the project, the commission used ECC Technologies’ “Broadband Assessment and Aggregation Tool” and an online survey targeted residents and businesses in the region. Those without internet at home could take the survey on a smartphone or submit a paper survey. Nearly 5,000 residents and businesses in WNC responded to the survey, which Southwestern Commission Director Sarah Thompson said was a good sample.

“The more the better and it varied county to county, but being able to engage 5,000 people in a rural region is a success and it showed what a pressing issue it was,” she said.

Business owners and residents were asked about availability of current internet services, to identify actual speeds available through a speed test, and what level of service they actually need. The data collected was laid out onto maps of each county to illustrate the pockets where better service is needed — like the Nantahala community of Macon County or the Fines Creek community of Haywood County.

“The actual response data is related to specific dots on the map and now each county can use that data and work with their GIS department to delve into the neighborhoods that are underserved or unserved and start to develop projects,” Thompson said.

Though the data is a major tool toward improving broadband services, it’s still going to be a slow process that is dependent on the region’s ability to secure grant funding and work in partnership with private internet providers since North Carolina law prohibits local governments from being internet providers.

Several projects are already under way in the region, where an unserved area has been identified, grant applications for federal infrastructure funds have been submitted and private providers have been engaged in conversations around providing service. By assisting with the cost of the infrastructure, a local community can more easily entice a provider to the table.

Thompson said she is already in the process of working with the ARC to secure some infrastructure grant funds that are available only for designated economically distressed counties like Swain and Graham.

Meanwhile, the Eastern Band of Cherokee Indians already has a broadband expansion project in the works that could soon benefit portions of neighboring Swain County. Back in 2003, Harrah’s Casino and Drake Enterprises in Franklin were experiencing internet outages, which can cost those big businesses millions of dollars.

The inconsistent coverage led EBCI and Drake to join together to create Balsam West and work began to create a 400-mile ring fiber optic network. With that “middle-mile” service now in place, the last mile is still needed to get service out to individual residences. During a meeting last summer about broadband, EBCI representatives told Swain residents that they planned to expand into Swain County once they’ve reached their goals of covering everyone on the Qualla Boundary.

“Cherokee’s project is very promising, especially since the tribe has more economic and budgetary resources than our county governments,” Thompson said.

Another challenge is a lack of competition among providers. While residents in Haywood County might have a choice between service through Charter Communications, AT&T or a wireless provider like Skyrunner, the only provider available in Swain County is Frontier Communications. During the same meeting with Swain residents, Frontier’s Director of Governmental Affairs Susan Miller tried to explain the complications of expanding services in rural mountain terrain. Installing expensive infrastructure that may only serve a handful of people just isn’t a profitable investment for a private company, but Frontier is getting some assistance from the federal government to better serve its rural monopoly.

As an incumbent provider, Frontier is receiving Connect America Funds that are specifically for new broadband infrastructure. Thompson said CAF funds are usually used on the “low hanging fruit,” adding new customers in communities adjacent to existing infrastructure, or adding equipment to improve service to existing customers. She said each county can work with Frontier to determine the best use of those funds to improve service — though Frontier admits parts of Swain will be the most costly.

Thompson said the good news is that our region is in a good position to receive any grant funding that becomes available for rural broadband efforts, but those funding opportunities are still limited. In the meantime, the Southwestern Commission will continue to keep the regional players engaged in the process.

“We want folks to understand we’re doing everything we can. Each county is very engaged in this. If there was an easy solution we’d already be there — it’s impossible to make promises but it’s definitely a high priority for the counties,” she said.

The full Region A Broadband Assessment report can be read at www.regiona.org.