The woodcock — secretive, rotund and acrobatic 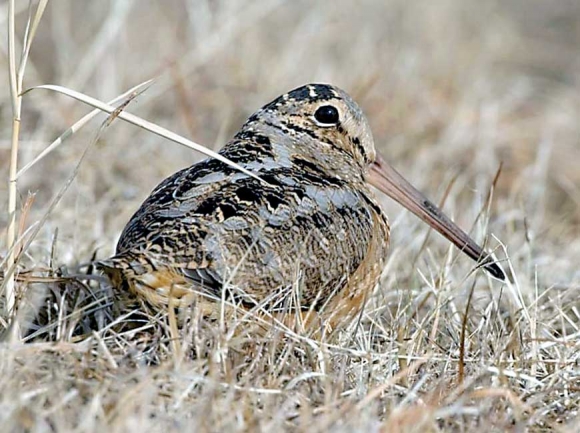 While walking stream banks or low-lying wetlands, you have perhaps had the memorable experience of flushing a woodcock — that secretive, rotund, popeyed, little bird with an exceedingly long down-pointing bill that explodes from underfoot and zigzags away on whistling wings and just barely managing bat-like to dodge tree limbs and trunks.

My wife and I used to jump woodcocks on a fairly frequent basis-especially this time of the year along a trail that no longer exists due to development on neighboring property. The trail led through a rocky wooded area just across the footbridge leading to our house. In the soft mud along the creek, it was easy to locate “poke holes” — the numerous round openings woodcocks leave wherever they’ve been searching for earthworms.

In order to locate worms, woodcocks sometimes perform a “foot stomping” routine that causes the prey to move underground. These birds have keen hearing, with ear openings located below and ahead of the eyes that are ideally situated for “earthworming.”

Once movement is detected, the woodcock plunges its bill into the mud. A normal bird would at this point have difficulty opening its bill so as to grasp and ingest. But there’s no such problem for the woodcock, which can open the flexible tip-end of its prehensile bill and suck the critters right in.

“Because of its mud-probing foraging technique, the woodcock’s rather large eyes are set high and back on its head,” writes Jim Clark in an article entitled “The Tumbling Timberdoodle” that appeared in “Birder’s World” magazine. “This placement not only helps keep mud and debris out of the eyes, but also provides an additional advantage in protection.

“Its field of vision completely encircles it, enabling the bird to see directly behind itself, much to the dismay of a predator or researcher trying to capture and band it.”

“If the winter has been mild, these vocal and non-vocal sounds (the bird produces a twittering sound with its wing primaries as it spirals downward) may be heard as early as the first week of January and will continue into April,” notes ornithologist Fred Alsop in Birds of the Smokies (1991).

“The best places to look are overgrown fields, wet seepage areas, and woodland edges where the bird quietly spends the day and where its staple food of earthworms can be found. Locate your ‘spot’ during the day and return at just about sunset. Most of the singing and display begins about a half hour after sundown, especially on those nights when the temperature is mild and there is little wind ….The ‘peent’ note given on the ground may remind you of the call of a frog or the common nighthawk.”