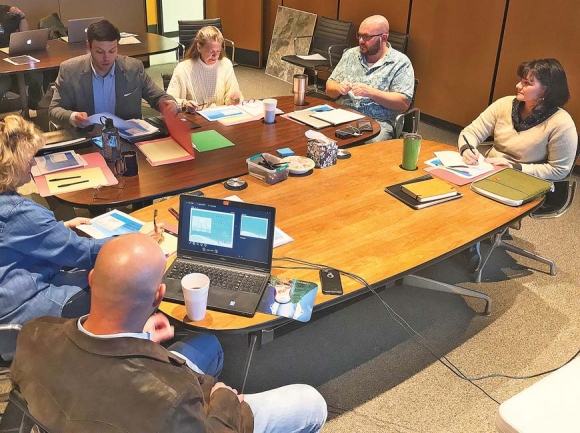 Canton’s Board of Aldermen/women and town staff discuss priorities at a retreat Jan. 27. Cory Vaillancourt photo

Officials in the town of Canton have been throwing around the term “Canton Comeback” for a few years now, noting the very visible progress made in economic development and administration.

While they do make a strong case for using the term, it’s clear that new Canton Mayor Zeb Smathers intends to fulfill his promise of progress, albeit of a less visible nature.

The 2016-17 fiscal year saw a slew of positives for the town, which completely rebranded itself, commissioned a pedestrian and bike plan, began studies on increasing access to Camp Hope and to the Rough Creek Watershed, started and finished a $2.1 million aquatic center, instituted a take-home policy for police cars and began work on the Sharptown Road project.

But the biggest stories out of Canton during that time all centered on economic development — a number of new businesses opened in the downtown retail core, and Freightliner’s investment in the Champion Drive corridor near Interstate 40 turned a dilapidated parcel that had been vacant for 15 years into an important sign of what’s down the road for Canton.

“I don’t see that level of interest slowing down any time soon,” said Town Manager Jason Burrell at the commencement of a board planning retreat Jan. 27.

During his campaign, Smathers said that he’d layout an “aggressive” vision for the town and that this year’s budget priorities would reflect the need for a leaner, meaner town government that will finally address some lingering problems.

At the board retreat — Smathers’ first as mayor — he presided over an agenda focused on improving communications, economic development, public safety, special events, recreation and infrastructure.

Joining Smathers were newly-elected board members Kristina Smith and James Markey, both of whom were going through their first such retreat.

“I thought it went very well,” Markey said. “I feel like I learned a lot about how things work in terms of town planning and operations, as well as the part I will be playing in helping support and guide these efforts.”

Smith, too, gained insight from the session.

“One takeaway from Saturday's planning session was that I am immensely impressed with the amount of projects and initiatives town staff undertake, from the new car take home program for law enforcement to building on the success of Labor Day,” she said. “At town hall, you can feel and see how they work together as a team and that is paramount to Canton's success.”

Smith and Markey, along with Alderman Ralph Hamlett and Alderwoman Gail Mull are now charged with helping Smathers carry out his vision of continuing the Canton Comeback through the next budget year, but have some major challenges ahead.

Tops among those infrastructure priorities is a $1.7 million in improvements to the Spruce Street Reservoir and the $2.3 million consolidation of the Crossroad Hills Water Association with the town’s water system.

Sewer and water repairs don’t usually precipitate the type of ribbon-cutting photo ops part and parcel to more glamorous, more visible projects like a pool or a stadium, and they’re also extremely expensive.

“That being said... infrastructure, the most unsexy thing, is what we build our town on,” Smith said. “We need to ensure that we position Canton for success and that is built on infrastructure.”

Paying for those improvements requires a strong effort to expand the tax base in Canton, which hasn’t raised taxes in a decade but still holds claim to the highest rate of all Haywood County municipalities.

A recent economic development agreement between the Haywood Chamber of Commerce and the Asheville Area Chamber leaves Canton well-positioned to take advantage of new businesses, and continuing the incentive program that last year provided between $15,000 and $20,000 to business owners for exterior and interior improvements won’t hurt either, but the utilization of existing economic resources seems to be a higher priority this year as well.

“The idea worked, and the price worked,” Burrell said. “It did not deter our crowd.”

The subject of alcohol sales had also been broached in the past as a potential way to take in more money at the fest, but after Markey asked about it, Smathers and the rest of the board said it wouldn’t be addressed this year.

Another controversial Labor Day topic — a proposed policy that would ban the display of imagery like the Confederate Flag during municipal parades — was also not addressed at the retreat.

However, much of the board’s attention was spent on another underutilized town resource.

“The Colonial remains, not for lack of building or staff, a riddle,” Smathers said of the 85 year-old downtown landmark theater that seats 300 and has an annex capable of hosting small meetings or gatherings.

“This needs to be the heartbeat of our downtown,” Smith said.

Part of the problem, though is that decades of underutilization have left the Park Street gem with almost no brand recognition despite being located just a few minutes’ drive from one of America’s live music capitals, Asheville.

“I don’t think the idea or identity of that facility is known by people outside of here,” said Burrell.

But that could be solved through the addition of Smith — who works in marketing for the Biltmore — and Markey, who says communication is his top priority.

“I’m glad the town is moving to a more current, streamlined website and I look forward to following up on how our consolidated calendars and schedules will be made available so that our town residents can stay accurately and continually informed.”