Insightful books to kick off the new year 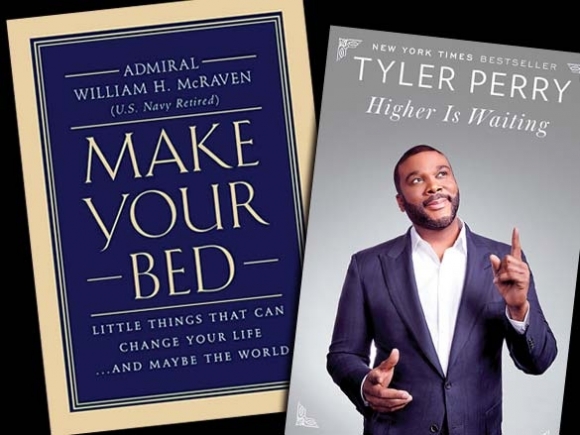 In early January, I sat with two friends in a café discussing the New Year. We were all coming off a rough time and were certain 2018 would usher in happier days. Our optimism was running high until we made our way to the deserted lot where my friends had parked their cars. Both of their vehicles were missing, towed away by a zealous, or more likely unscrupulous, wrecking service.

This dash of cold reality might have snuffed out our hopes, but my friends took this minor disaster with such good grace, laughing at the irony of the situation vis-à-vis our anticipation of better times, that their mood and good humor raised my spirits. By the time we secured their cars, the New Year had recovered a bit of its flame.

So many of us embrace January 1 with high expectations. We make our New Year’s resolutions, and some of us — you can already rule me out on this one — even manage to keep them. If we’ve endured a particularly tough year — you can count me back in — we are eager to see an end to hardship, hoping for less suffering and greater joy.

Many of us also look to the change in the calendar as a time to change ourselves. We watch inspirational videos on YouTube, we enlist in websites promising to send us daily quotations of encouragement, we join a gym or some social group hoping that the presence of others will boost our efforts at alteration.

Some of us even read books.

In Make Your Bed: Little Things That Can Change Your Life And Maybe The World (Hachette Book Group, 2017, 130 pages), Admiral William H. McRaven expands on a commencement address he delivered in 2014 to students at the University of Texas-Austin. When the address went viral, winning the admiral 10 million views, McRaven decided to turn that speech into a book, using the same outline as his speech but adding many more stories about himself and others to illustrate his point.

McRaven, who served for 37 years as a Navy Seal and retired as Commander of all U.S. Special Operations Forces, takes many of these examples from his time in the military. The lessons he learned as a Seal he regards as useful to everyone. In the first chapter, “Make Your Bed,” he teaches us to begin each day with a task completed and to understand the importance of details. In other chapters, with titles like “You Can’t Go It Alone,” “Failure Can Make You Stronger,” and “Never, Ever Quit,” the admiral urges his readers to take command of their lives, accept responsibility for their actions, and to follow through on their ambitions.

In Higher Is Waiting (Spiegel & Grau, 2017, 205 pages), Tyler Perry teaches some of the same lessons, but comes at them from an entirely different direction. Well known today as a playwright, filmmaker, comedian, actor, and philanthropist, Perry fought his battles not in foreign lands but in the streets of New Orleans. Son of an abusive father and a loving mother, shy, poor, and black, Perry left The Big Easy for Atlanta at the age of 21, carrying little more than a play he had written and his dreams.

Perry gives us snapshots of his struggles during his childhood and early adulthood: the beatings delivered by his father; the constant reminders from the people around him that he would never amount to anything; the years in Atlanta when he worked odd jobs, existed from paycheck to paycheck, and was several times homeless and living out of his car. Though tempted a dozen times to give up his dreams of writing plays and pulling himself out of poverty, Perry never quit. Today he is the owner of several successful enterprises, and his Perry Foundation gives money to numerous individuals and causes.

Like Admiral McRaven, Perry aims at inspiring readers by sharing the lessons he learned through these struggles: taking one step at a time, never quitting, reacting to criticism, giving back to those in need, and a score of other insights. Again like Admiral McRaven, he uses as evidence for his arguments insights from his past, showing us how his mother’s love and care bolstered him, how other adults like the blind Mr. Butler and pet shop owner Miss Lynn taught him lessons for a lifetime, how his hard upbringing and the hits he took in Atlanta gave him the strength and courage to follow his ambitions.

One major difference between Make Your Bed and Higher Is Waiting is Tyler Perry’s belief, evinced again and again in his story, in the “essence, power, and grace of God.” He quotes frequently from Scripture, recounts Biblical stories, and credits his professional success with a faith in a holy force that “was protecting me, loving me, and keeping me close.”

Perry also adds helps for readers in the form of admonitions and questions at the end of each chapter. Some of these guidelines come from the Bible, while others read like this one: “Consider a fear you have. It could be flying, heights, being alone, speaking in public — whatever frightens you. What’s keeping you from climbing higher? What are you willing to do to overcome it?”

If you’re looking for inspiration, if you are bloodied and down and looking for a way up, Higher Is Waiting and Make Your Bed offer a good way to start your journey toward change and new possibilities.