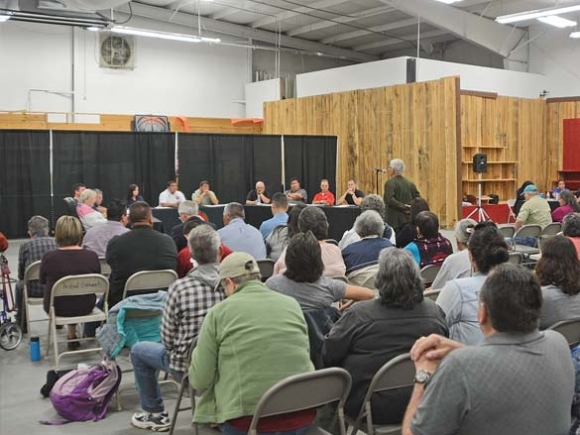 Cherokee inched closer to holding a referendum vote asking how widely available alcohol should be on tribal land with a vote during December’s Tribal Council meeting, but exactly what the implications of such a referendum might be is still unclear.

Councilmembers voted unanimously Dec. 7 to hold a referendum vote on “the question of expanding alcohol sales to other business establishments outside of casino property on the Qualla Boundary,” with the specific wording of the question yet to be determined. The plan is for council to hold a work session to determine the wording and then schedule a referendum from there. No such work session has yet been scheduled.

While everyone seems to be in favor of holding a referendum, opinions diverge on exactly what the consequences of a “no” vote might be. Councilmember Lisa Taylor, of Painttown, originally introduced the resolution with the idea of preventing new permits being issued under what is known as the Blue Ridge Law. Three restaurants on the Qualla Boundary currently sell alcohol under that law.

However, others assert that, because the Blue Ridge Law is state statute, those permits would be available regardless of the outcome of the referendum. From that standpoint, they say, a referendum would essentially be an opportunity for tribal members to say whether they’d like to see alcohol sales expand rather than a chance to rein them in.

Tribal members have long been leery of allowing any kind of alcohol to be sold on their land, but a 2009 referendum vote granted a limited exception — alcohol could be sold at Harrah’s Cherokee Casino Resort, but nowhere else. That decision resulted in a marked increase in revenue at the casino, with alcohol sales alone bringing in about $20 million annually to the tribe, according to Principal Chief Richard Sneed. That figure doesn’t count the gaming and hotel revenue from customers who likely would have skipped Cherokee if the casino were still dry.

More recently, exemptions under the Blue Ridge Law have caused consternation for many tribal members. The Tribal Council sitting in 2011 passed a law that would allow off-casino permits to be granted in a handful of specific situations, and when the state legislature completed its end of the law in 2015, Cherokee was able to grant permits to tourism establishments within 1.5 miles of Blue Ridge Parkway on-ramps — this exception is known as the Blue Ridge Law — and for one-time events such as festivals, among other situations.

Then-Principal Chief Patrick Lambert declined to allow such permits to be granted, telling the tribe’s Alcohol Beverage Control Commission that it would be illegal to do so without a referendum vote granting permission. When Principal Chief Richard Sneed took office in May 2017, however, the first Blue Ridge Law permits were issued. Sneed has asserted that the state law takes precedence in this situation because federal law grants states sole control over distribution of alcohol.

In October 2017, less than a month after being sworn in, Taylor introduced the referendum legislation with the goal of curtailing Blue Ridge Law permits. A public forum on the issue held Nov. 6, 2017, drew about 100 people, with those offering comment overwhelmingly opposed to any off-casino sales.

Sneed has argued vehemently against any attempt to override or ignore the Blue Ridge Law, warning that the state could then find the tribe to be out of compliance with state alcohol laws and refuse to supply alcohol at all — including on casino property. If that were to happen, the tribe would take an enormous financial hit.

In December, he also spoke against a piece of Taylor’s legislation that asserts that in granting Blue Ridge Law permits, the Tribal ABC Commission “assume(s) mistakenly that we are not a sovereign nation and have somehow ceded our sovereignty to the State of North Carolina.” The sentence is not in the section of the ordinance that outlines what action should take place upon passage, but even included as part of the background section, Sneed said, it’s dangerous.

“I don’t know how we can support to pass that with that language in there, because that is not accurate and that’s not what is happening,” he said. “They (the TABCC) were authorized by tribal ordinance that was passed by this Tribal Council (in 2011) to issue those permits. When that state law was adopted in 2015, that makes it law, and they are tasked with carrying out what is in that ordinance.

“The language in here, it’s slanderous language that says they ‘assume mistakenly that we have somehow ceded our sovereignty.’ That’s not accurate.”

He continued to point out that the Eastern Band of Cherokee Indians is the only government in North Carolina to have its own ABC Commission — the rest of the state falls under the authority of the state commission. That in and of itself is evidence of the tribe’s sovereignty in this situation, he said; the tribe just has to comply with state law because the state controls alcohol distribution.

“I don’t disagree with you. We need to have a referendum and let the people vote, but that language that’s in there is completely inaccurate,” Sneed said.

Lambert happened to be in the audience that day and didn’t hesitate to offer an opposing viewpoint.

“To say that it has to be done is just flat wrong,” he said of issuing Blue Ridge Law permits. “That’s just misleading to the public. The commission chose to not issue permits for several years, and did anything bad happen in those years? No.”

“We can make the decision ourselves to issue those permits or to not issue those permits,” he said. “When I was in office, I made sure the commission understood I would not tolerate the issuing of a permit like that because the people had spoken.”

If the concern is that the state could retaliate against the tribe for ignoring the Blue Ridge Law, Lambert said, there is another option.

“(The Blue Ridge Law) was passed by the state at the behest of the tribe. What needs to be asked here in this chamber is if we still agree with that law and what was pushed forward and lobbied by certain members of this tribe,” he said. “It’s a very simple thing to me. Why don’t we go lobby again and remove that provision? Then it’s up to this body and it’s up to this tribe and this sword isn’t held over everybody’s head.”

Not everyone was convinced.

“The Blue Ridge Bill will not be taken away,” said Chairman Adam Wachacha, of Snowbird. “Jump up and correct me if I’m wrong, but with this resolution being passed, the requirements of the Blue Ridge Bill would still be in place because it’s an ordinance.”

Vice Chief Alan “B” Ensley seemed to side with Sneed’s belief that it would be best to avoid passing a resolution with Taylor’s proposed language regarding the Blue Ridge Bill.

Other councilmembers indicated that, regardless of their feelings about the Blue Ridge Law, they would be hesitant to make any decision that could pose a risk to casino sales.

“I don’t want to jeopardize anything,” said Councilmember Boyd Owle of Birdtown.

Several councilmembers said they’d like to have a sit-down with the state ABC Commission to answer some of those questions, to which TABCC Attorney Michael Gross said that there had been such a meeting, earlier that same week, to discuss exactly that. The State ABC Commission chairman, “a number of councilmembers,” members of the TABCC and of the executive office were there, Gross said.

However, he said, “I understand that the email or something didn’t get out to everybody.”

During the discussion that followed in council chambers, it wasn’t clear exactly how or why some councilmembers received an email inviting them to the meeting and others didn’t. However, it was clear that certain councilmembers never received an invitation to this joint meeting.

Councilmember Richard French, of Big Cove, said that he originally got an email saying that a meeting would be held at 1 p.m. that day, but when he checked later the time had been changed to noon. At that point, he wasn’t able to make it in time.

“When I got it, it didn’t have all the councilmembers on it,” he said. “It had certain names.”

Such gatherings of a select portion of the Tribal Council had been an issue during the 2015-2017 term, with French one of the councilmembers who was often excluded during that time. He offered a strong word of warning against that practice going forward.

Council ultimately passed Taylor’s resolution by a unanimous vote of those present. Councilmember Tommye Saunooke, of Painttown, was absent.