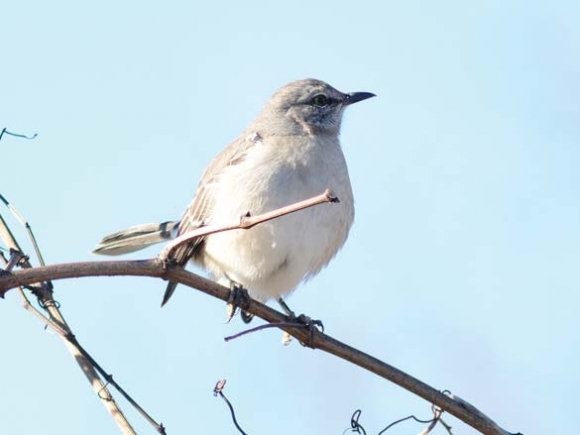 At 8 a.m. on a December morning, the newly risen sun had barely warmed the air over Franklin from the previous night’s low of 18 degrees when knots of bundled-up birders began gathering across the county to partake in a chilly winter tradition — the Christmas Bird Count.

One of those knots formed at the Big Bear entrance to the Little Tennessee River Greenway, a crew of four birders — plus one Smoky Mountain News reporter — waiting in frosty low-30s weather to receive their marching orders.

Those orders are simple, as it turned out — walk slowly forward, and keep all senses on high alert for evidence of birds. Thirty seconds in, zone leader Tim Carstens has spotted the first bird of the morning, a Carolina wren. Binoculars raised, the birders swiveled to add to that list in what to me seemed rapid-fire mode, sighting and naming each bird before I, a birding novice, had even registered that there was a bird to see.

That was my impression, but it wasn’t Carstens’.

“It’s not really ‘birdy’ right now,” he said, the made-up adjective seeming the only one appropriate to the occasion. “As the sun comes up we’ll start to see more.”

It was still cold enough that the pen I’d brought to scribble notes with froze if I went too long without using it, my warm breath condensing into fog as the sun rose blindingly bright behind our backs.

“Have you seen the hawk over there?” asked a person walking a dog the opposite way down the trail. “Anywhere along this river you’ll see them, because they hunt all along here. Good luck — happy hunting!”

Minutes later, we stumbled upon what would become a standout find of the day — a sharp-shinned hawk, perched in a tree uphill from the path.

“You’re going to want to see this,” said Chris Bogardus, one of the birders, motioning to me to borrow his binoculars. “Sharp-shinned hawks are beautiful.”

I reached for the binoculars, and the bird flew away. 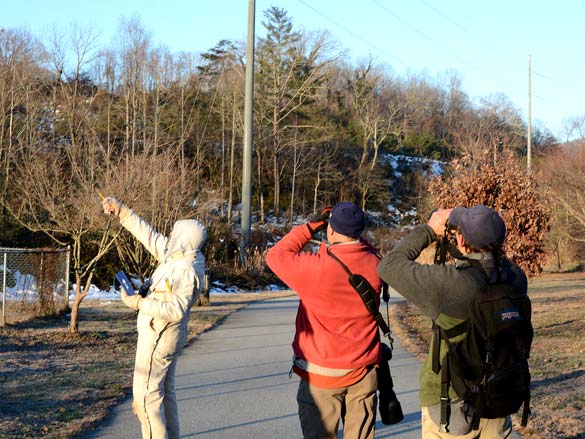 Origins of the count

This cluster of birders was but a tiny subset of the thousands of people who will participate in the Christmas Bird Count by the time this season’s event is over. The tradition began in 1900 with 27 birders tallying birds in 25 locations and has since spread to cover the entire Western Hemisphere, with counts stretching from the Arctic Bay south to the Drake Passage off the southern tip of Argentina.

The count started when ornithologist and Audubon Society officer Frank M. Chapman proposed an annual bird count as a replacement for a holiday tradition then in existence called the “Christmas Side Hunt.” Participants would choose sides and go out with their guns — whoever brought back the biggest pile of quarry would be declared the winner.

“People got disgusted with seeing dead birds, so they started going out and counting them instead,” Bogardus said. “Wasn’t that nice? And it caught on.”

This year is the Audubon Society’s 118th Christmas Bird Count, making the volunteer census one of the longest-running citizen science projects in existence, and it’s resulted in an extensive collection of data allowing anyone interested to compare results in specific locations across years or decades, depending how long the count in that particular locale has been going on. 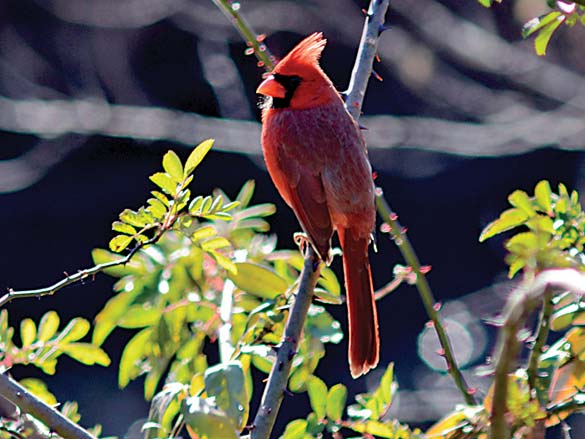 A story told through data

This bird count circle — organized by the Franklin Bird Club — is one of the newer arrivals on the Christmas Bird Count scene, with the first count held on Jan. 4, 2014. Just up the mountain in Highlands, however, the count is a much more ingrained tradition, with the first one held in 1997.

The greenway crew, one of four sub-groups working the Franklin Bird Club’s circle, certainly took seriously its part in this year’s data-gathering endeavor. Locations, walking distances and sightings were recorded studiously in eBird, a science app ornithologists use to get a bead on what the worldwide community of birdwatchers is seeing in the wild. Small talk kept to a minimum, as at any moment the thread of conversation could be lost when a flash of movement, fragment of birdsong or understory rustling caused participants to drop the topic at hand and shift into birdwatching mode.

“We’re the only ones that can do this,” Bogardus said. “We know our birds, and we’re willing to drag ourselves out in the morning and walk around so somebody 50 years from now can look at what we did and say, ‘We’re up on this one, we’re down on this one, DDT’s affecting this one.”

There’s a sense of duty that comes with the Christmas Bird Count, he said.

It may have been cold, but the day was clear and sunny, the chilly air lending a welcome freshness to the adventure. And always, there were the birds — perching in trees, pecking about for seeds and insects, gliding through clear skies. Every sighting spurred excitement, whether the bird in question turned out to be something notable like a sharp-shinned hawk or something you can count on seeing 10 of before the day is out, like a dove or a crow.

It takes a lot of know-how to identify a bird based off a momentary sighting tens or hundreds of yards away, but the folks with binoculars knew their stuff. Each bird has its tells — a song pattern unique to only that species, a splash of color on the breast or back that distinguishes it from a similar bird, a particular way of flying. Learning those, Carstens said, is the work of a lifetime.

And seeing them, as far as the Christmas Bird Count goes, is the work of a very long and very organized day. While perhaps not as gung-ho as some — the really motivated birders, Carstens said, will start before dawn so as to have a chance at seeing owls — the Franklin Bird Club folks put in a solid eight hours of driving and walking and binocular lifting throughout the 15-mile-diameter circle centered on Franklin before calling it a day and gathering to tally their results.

Years from now, those individual data points will fade to become part of a larger picture drawn over years of groups just like this one walking frosty trails, binoculars in hand, to meet the birds that make their home in the mountains. And through that picture, the birds will tell their story.

This year’s Christmas Bird Count extends from Dec. 14 through Jan. 5, 2018 — and there’s still time to get in on the action.

A count centered on Balsam in Haywood County will be held Friday, Jan. 5, led by Don Hendershot. To sign up or get more information about meeting times and locations, contact Hendershot at 828.646.0871 or This email address is being protected from spambots. You need JavaScript enabled to view it..