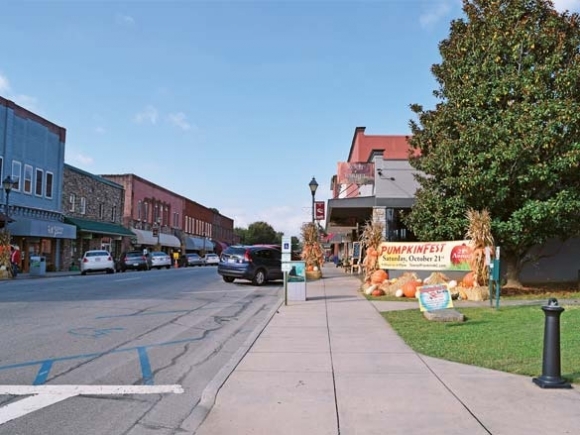 After paying for several engineering studies over the years, the town of Franklin is moving forward with a plan to try out some different parking designs on Main Street.

The new Town Engineer Nathanial Moore and Town Planner Justin Setser have put together a two-phase parking plan. The temporary restriping will begin at Patton Avenue at town hall and go all the way down Main Street to the intersection of Iotla Street.

The plan calls for making Main Street all parallel parking down the right-hand side while leaving the 30-degree angled parking on the left-hand side where Books Unlimited and the Scottish Tartans Museum are located.

“We had a discussion about making it into 45-degree spots. We thought that would be best way to go, but after we measured the ground the 45-degree just won’t work. It will only work if we went down to a single lane,” Moore said. “But we’re keeping two lanes.”

Moore said the studies the town used based their recommendations on the fact that Main Street is the same width all the way down to the square, but that’s not the case. The narrowest part of Main Street is 45 feet down toward town hall and it widens to 48 feet as it goes toward the square.

The plan also includes one designated unloading zone for all trucks making deliveries in order to cut down on complaints about trucks taking up lanes on Main Street. Moore said temporary curb extensions would also be installed up to the crosswalks to make it safer for pedestrians to cross Main Street.

The temporary road tape that will be used will last up to several months depending on the weather and can be easily modified if the town staff sees something not working.

“I’m willing to go along with a limited time period with temporary striping and I think it needs to be 60 to 90 days,” said Councilmember Joe Collins.

The councilmembers were ready to get the temporary striping down immediately, but Gwen Taylor, representing merchants with the Streets of Franklin Association, asked the board to consider waiting until after the holidays.

“Our busiest time of year is in November and December,” she said. “It might affect people coming downtown to shop — they could get frustrated and then won’t come downtown.”

The board decided to wait until January to start the project.