This must be the place: ‘And it feels like heaven’s so far away’ 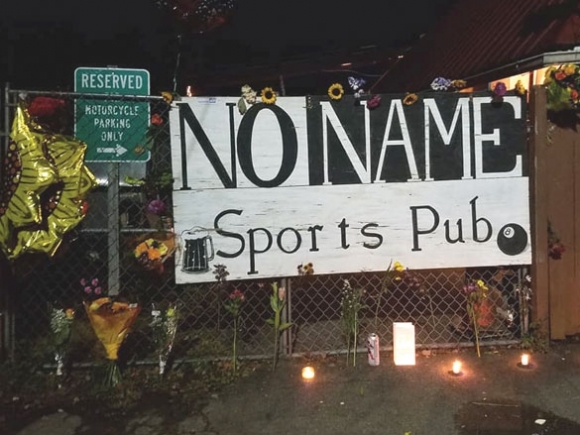 It’s the three words one person — let alone one family or one community — never wants to here when it comes to a young person passing away before they could blossom and take over the world, usually with a signature smile or laugh (or both).

Growing up in an older family, where my aunts, uncles and grandparents were many years ahead of my peers’ families, I was used to the occasional funeral as a kid. It was my 103-year-old great-grandmother when I was 13, my grandparents when I was in high school and college, and so forth.

But, it was the funerals of local kids or friends of mine that really struck a chord deep within me.

At first, you’d see the face — whether you knew them or not — at the beginning of the yearbook, a dedication to someone “taken too soon,” where teardrops from their friends and family would surely stain the page once they came across it.

And there were those tragedies growing up, where some teen would flip their car drunkenly after a party or from speeding down a lonely stretch of road, ultimately ending in an early demise. Then, there’s the ones who were born sick or got sick while we all were in school. Disease. Cancer. Medical accidents.

But, nothing really prepares you for that first “taken too soon” that hits you directly between the eyes, out-of-nowhere, and there’s nothing you can do about it.

I was 20 years old when that happened. I was a sophomore in college in Connecticut. The spring semester ended, with summer vacation being the only priority. Instead of immediately driving back to Upstate New York to see my high school cronies and family, I followed my girlfriend at the time down to her abode in the Pocono Mountains. I spent most that first week of summer vacation bouncing around northeastern Pennsylvania, hiking to waterfalls during the day, cheering on the Philadelphia Phillies at night.

But, when I finally decided to make an appearance back in my hometown of Rouses Point, I remember the silence of walking into my childhood home. My sister was gone to her boyfriend’s house, my dad at work on the Canadian border, but my mother was in her bedroom, in her bed, sobbing to herself.

“What’s wrong?” I asked, with that sinking feeling washing over me that something terrible happened and I was about to hear what it was.

“Jason was killed last night,” she muttered under her breath.

My childhood best friend, Jason had always been there for me, especially during those years when I count all my friends on one hand, with four fingers left vacant after I counted Jason. We did everything together. Inseparable. After he’d become a “teacher’s helper” — where we moved up to 5th grade, but he remained in 4th for another year — we started to lose touch. But, the memories, and the eternal bond, remained.

Jason was 19 when he died. Motorcycle accident. I remember his wake, vividly. Most of us just a year or two out of high school, many still with a year to go before college. The uncontrollable crying. I held it together all the way to the casket, but lost it when I hugged his mother. Cried like a baby. But, I also remember kneeling in front of his casket, dropping a handful of dirt on it, whispering, “I’m going to live a life for two of us,” before I kissed the cold metal, stood up, and moved on with my life.

There have been several young friends of mine who have passed since that funeral some 12 years ago. And each one immediately brings me back to kneeling there at Jason’s casket. All those young faces, all full of energy and potential, “taken too soon,” their flame extinguished on this physical earth, but not in the hearts of those who will never forget their presence, and impact on the greater good.

Twenty-eight-year-old Shannon Marsden was definitely one of those “taken too soon.” A beloved bartender at No Name Sports Pub in Sylva and also a huge supporter of the Western North Carolina music scene, Shannon was a common denominator of this region, just like her best friend and fellow co-worker Mary Harper, who was also involved in the car crash last weekend and still remains in the hospital.

Since we’ve all learned of Shannon’s passing, a candlelight vigil has remained in front of No Name, never once flickering out, always being relit, just like the souls wandering by the vigil, hugging and comforting each other amid this crossroads where everyone is once again taking inventory of their own lives and actions.

“But, why?” It seems to always be the question posed when something like this happens. We’ll probably never get much more of an answer than, “It just does.” It’s as simple, and as sad, as that. But, it doesn’t ever take away the sincerity of daily interactions, the preciousness of friendship, and the singular power that is genuine love between people — far and wide, known and unknown.

Editor’s Note: There will be a memorial service for Shannon Marsden from 4 p.m. to 2 a.m. Friday, Nov. 10, at No Name Sports Pub in Sylva. There will also be a fundraiser for Marsden’s family and Mary Harper’s medical recovery with live music by PMA (reggae/rock) at 9 p.m. Nov. 10 at Innovation Brewing in Sylva. Creekside Oyster House & Grill (Sylva) will donate a portion of sales Nov. 9-10 to the fundraising efforts.

2 The Museum of the Cherokee Indian will host a day of fun activities celebrating the Cherokee month of Nvdadegwa, known as the “Hunter’s Moon,” on Saturday, Nov. 11.

5 KARE will have its 8th annual Festival of Trees dinner and auction at 5:30 p.m. Thursday, Nov. 16, at Laurel Ridge Country Club.