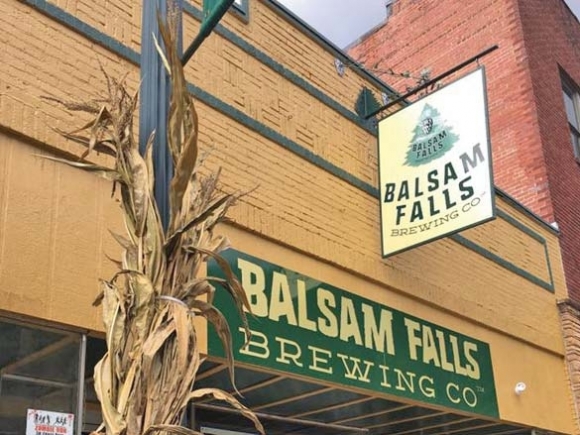 With its grand opening last Friday, Balsam Falls Brewing Company becomes the third business of its kind in Sylva.

“[It’s] what I’ve always wanted to do, which was take one of my hobbies and turn it into a career,” said co-owner/brewmaster Corey Bryson.

Born and raised in Sylva, Bryson bounced around the country before spending the last 16 years based in Tampa, Florida. A longtime and avid home-brewer, Bryson became very involved in the enormous craft beer scene that is at the heart of Tampa, eventually being certified as a judge in local competitions.

That spark of interest lit an internal fire to someday have a brewery of his own. When it was decided to launch the brewery, Bryson and his wife put everything on the line.

“It was a pretty big leap, sold our house in Florida, cashed in 401Ks, picked the brains of dozens of brewers, trying to learn from their mistakes and do things better,” he said.

Bryson yearned to someday return to Sylva, to set down roots with his family in the mountains of Western North Carolina, where now the downtown brewery is a real, tangible thing — a one-barrel system with room to grow soon to a three- or five-barrel system.

“[Already,] the local population [has been] extremely supportive — it’s very surreal,” he said. “[We want to] make sure we can continue to produce a variety of beers. Just keep doing what we’re doing. Our soft openings went really well. So, at this point, it’s keeping our systems running and keeping the beer flowing.”