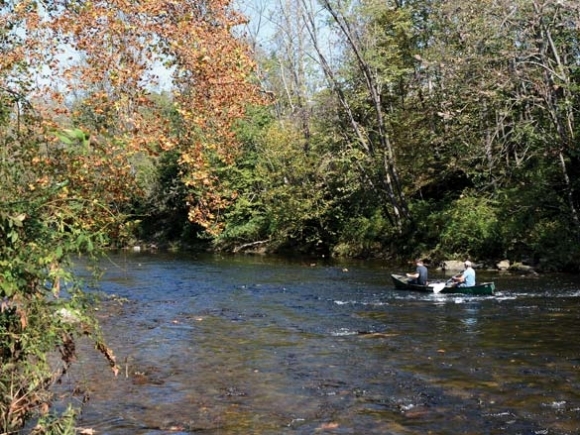 It’s a sunny, abnormally warm October afternoon, and Tom Anspach is ready to meet it with a canoe on the Pigeon River.

But Anspach, accompanied by 19-year-old Josh Arford, isn’t there to paddle for miles or fish for trout. He’s there to fish for trash.

“I don’t like fishing, but I like fishing trash out of the river,” said Anspach, who works at Asheville-Buncombe Technical Community College when he’s not chasing down litter.

A Canton resident, Anspach lives right along the Pigeon River and has been doing these paddle-driven litter pickups for about 10 years, getting out four or five times a year to drag the accumulations of beer cans, fishing worm containers, old tires and various other eyesores out of the river and into the trash where they belong. But, after Haywood Waterways Association launched its Adopt-a-Stream Program in 2009, Anspach saw a way to fit his efforts under a larger banner, adopting the section of the Pigeon that runs through the Canton Recreation Park.

For a while, his name was on the Adopt-a-Stream sign installed on the road paralleling the river, but then some younger people got interested in lending a hand.

“A bunch of kids from the high school wanted to be part of it, so I was like, ‘Why don’t you guys put your sign on it?’” Anspach said.

Now, the Pisgah High School Ecology Club is listed as adopter of the river section. It’s up to them to plan and execute the river cleanups. 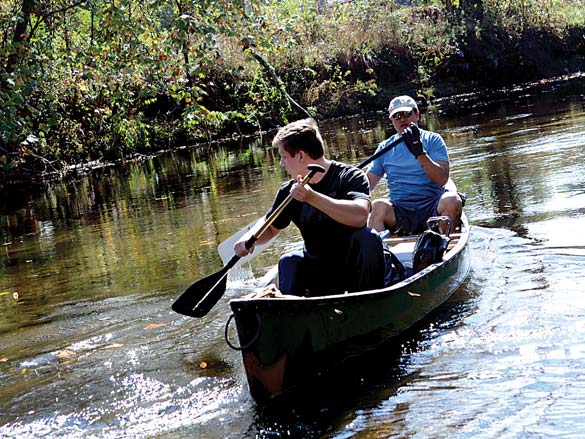 Usually, between four and seven people chip in on a river cleanup, but on this particular day it was just Anspach, Arford, and Arford’s mother Shelley Arford. Anspach and Josh Arford teamed up to take a canoe, while Shelley Arford picked up a trash grabber to snag litter strewn along the walking path at the top of the river bank.

“It’s just a good thing to do because there’s a lot of problems with littering right now,” said Josh Arford who is now looking for his own section of river to adopt.

Anspach can back him up on that one. He’s found some crazy stuff in the water — “I can’t tell you unless you’re over the age of 18,” he said, when asked what the weirdest find has been — and plenty of stuff that’s just plain gross.

“Diapers. A lot of diapers,” he said. “That’s how we judge how dirty the cleanup is, is by the diapers. Right now we’re at one diaper.”

Though, not all discoveries are trash-oriented. Once, Anspach stumbled upon some ancient Native American petroglyphs on the riverbank, verified by U.S. Forest Service Archeologist Scott Ashcraft.

To do the entire section of adopted stream would take about eight hours, Anspach said, but he usually divides it up into smaller sections that take one or two hours at a time. All told, the section they covered that day only entailed a few hundred yards, but nevertheless it yielded 100 pounds of trash.

That’s a lot of trash, but it’s significantly less than the usual haul. Typically, that section of river will turn up about 150 pounds of trash.

“It just seems like it’s getting cleaner and cleaner every time we do it,” Anspach said.

Even 150 pounds would be just a small piece of the 22 tons — that’s 44,000 pounds — of trash that Adopt-a-Stream volunteers have removed since the program started in 2009. Currently, about 16 groups are involved with the program, the high end of a fluctuating number that began with nine groups at the program’s inception. At a minimum, groups need to commit to adopting the stream for two years and doing at least one cleanup a year, with Haywood Waterways providing bags, gloves and trash grabbers.

However, the minimum is just a starting point.

“We have those who are super gung-ho, which is Tom,” said Christine O’Brien, who coordinates the program. “He’s like our poster child of the Adopt-A-Stream program.”

O’Brien encourages multiple, shorter cleanups each year in lieu of one big one, because trash is constantly entering the stream through storm drains and windblown litter. More regular attention can make the job easier each time around, something that the ecology club volunteers have certainly experienced during their time on the job.

Getting out a canoe and paddling giant trash bags through the river itself is one of the more hands-on methods of stream cleanup. But O’Brien stresses that there’s a job for everybody when it comes to getting rid of litter, regardless of physical ability.

“Some of the larger items may be down in the creek, so that would be getting the big pieces of eyesore out. Cleaning up parking lots and stuff like that keeps a lot of the little stuff like plastic bottles and aluminum cans out that are also eyesores. I would weigh any of those equally as effective at cleaning up our rivers and creeks,” she said.

Even picking up trash from a parking lot, she said, counts as stream cleanup in her book. Because every piece of plastic and discarded bottle blowing around a parking lot will more than likely end up in a stream somewhere, if nobody picks it up. Everybody has a part to play in keeping streams clean.

And it’s an effort that’s well worth the time, O’Brien said. Environmentally and economically, the impacts are tangible.

“It shows that we care about our environment,” she said. “It keeps our rivers and streams safe for fishing or swimming, and also it keeps it clean so when we have visitors come they’re more likely to come back, so there’s an economic impact to keeping our streams clean. A lot of these creeks are trout-supporting streams, and we want people to come back to Haywood County and stay a while.”

There are endless sections of stream throughout Haywood County waiting for somebody to adopt them. Individuals and groups alike are welcome to apply.

• A commitment to cleaning the adopted stream at least once a year.

• Committing to adopt the stream for at least two years.

• Reporting results after each cleanup, including pounds of trash removed, number of volunteers and hours worked.

To adopt a stream, or get put on a list of people invited to help with monthly cleanups at streams throughout the county, contact Christine O’Brien, This email address is being protected from spambots. You need JavaScript enabled to view it. or 828.476.4667.