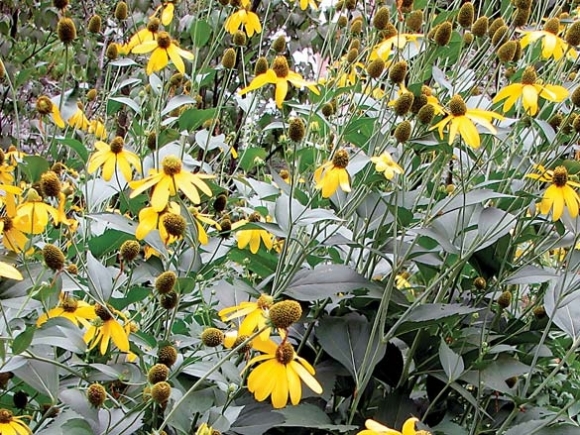 Cherokee tribal members could be gathering sochan plants from the Great Smoky Mountains National Park as early as next spring after Tribal Council’s vote last week to fund the $68,100 needed to complete the regulatory process.

“We appreciate the commitment that Principal Chief Sneed and the tribe are making to help us complete the required environmental assessment to better understand potential effects associated with traditional gathering,” said Clay Jordan, the park’s acting superintendent. “Through the assessment, managers will be able to determine whether traditional gathering can be done without significantly impacting the park sochan population.”

Sochan, also known as the green-headed coneflower, has historically been an important food source for the Cherokee people, but gathering wild plants is prohibited on National Park Service land. With the largest national park east of the Mississippi abutting the Qualla Boundary — on land that originally belonged to the Cherokee people — the inability to legally gather sochan and other culturally important plants there has long been a sticking point for many tribal members.

In 2016, the federal government made a change to these rules, allowing members of federally recognized tribes to request to enter into agreements with the Park Service that would allow them to gather and remove culturally important plants and plant parts. However, the process is far from instantaneous, requiring meetings, agreements and studies for each individual plant species to be harvested before one leaf can be legally removed. The Park Service has to know where sochan grows in the Great Smoky Mountains National Park, how dense those patches are and how much can be sustainably removed before it can decide how many permits should be offered to harvest how many plants.

There’s no federal money available to answer any of those questions.

That’s the conundrum that came up in Council when members discussed whether they should approve the $68,000.

“This whole thing bothers me,” said Councilmember Perry Shell, of Big Cove. The road to legal gathering in the park is taking years longer than expected when discussions first began, he said, and in the meantime tribal elders have found themselves arrested for gathering native plants inside park boundaries.

“My reaction was the same as yours when we received a letter from the park with their request for funding, and actually they had requested more,” Principal Chief Richard Sneed said in response to a similar sentiment from councilmember Tommye Saunooke taking issue with the price tag.

“We have a choice to make,” Sneed said. “We can either bite the bullet — we’re a tribe that has the resources to do it — or we can say, ‘Well, we don’t want to spend the money. You have a rule change federal government, you fund it.’ It will probably never get funded.”

The other issue to consider, Sneed said, is the decision’s effect on other tribes. The EBCI’s decision to fund the environmental assessment would set the precedent that Indian tribes should pay for these studies to be done. However, pointed out Joe-Ann McCoy, director of the Germplasm Repository at the N.C. Arboretum, completing the study could also help out other tribes who need that same information to get gathering agreements in place but are perhaps less financially able to fund such studies.

The $68,000 would support staffing, operational and contractual costs for the study, the resolution states. The money goes to Friends of the Smokies, the park’s nonprofit partner, which will then see that those funds are spent for their intended purpose.

“It is a pay to play. I don’t like it either,” said Joey Owle, director of the tribe’s Division of Agriculture and Natural Resources. “We’re having to jump through hoops that other people don’t, but that’s the nature of it.”

However, Owle feels pretty certain that the results of the environmental assessment will be favorable to tribal members desiring to gather sochan. McCoy has already completed a study on the effects of traditional Cherokee sochan harvesting at a test plot at Cherokee Central Schools and plans to publish the paper in the next couple months.

“The Cherokee method of harvest actually benefits the plant,” she told Tribal Council. “The ones that we harvested produced more flower and fruit and seed than the ones that weren’t harvested. This is very extraordinary for a native plant.”

When mature, sochan grows a yellow, sunflower-like bloom with a greenish-yellow, cone-shaped center, but the flower isn’t what made the plant important to Cherokee people. They would harvest the young leaves in the early spring and boil them for a nutritious, cleansing dish after a long winter. Those greens are every bit as nutritious as the superfood kale, McCoy said.

Tribal member Becky Walker, of Birdtown, took the podium to remind Tribal Council of these nutritional and cultural benefits, urging them to appropriate the money regardless of how they may feel about the fairness of having to pay for the study.

“I appreciate those words,” Shell said. “That’s true. Also it still irks me that we’re having to pay for a law that the federal government passed in federal land.”

Ultimately, however, Shell moved to pass the resolution, with councilmembers approving it unanimously.

Sochan is not the only native plant that Cherokee tribal members would like to harvest in the park, but a separate environmental assessment and harvesting agreement is required for each species. Sochan was the easiest one to go after, but the tribe will likely begin the process to start harvesting ramps once the sochan agreement is complete.

“What this will do is set up the framework, which will allow for the next time we go forward with some kind of EA, some kind of agreement for a different plan, we’ll have a framework and structure in place,” Owle said. “To me that helps streamline the process, reducing the cost.”