Jack Ewing to retire as leader of Lake Junaluska 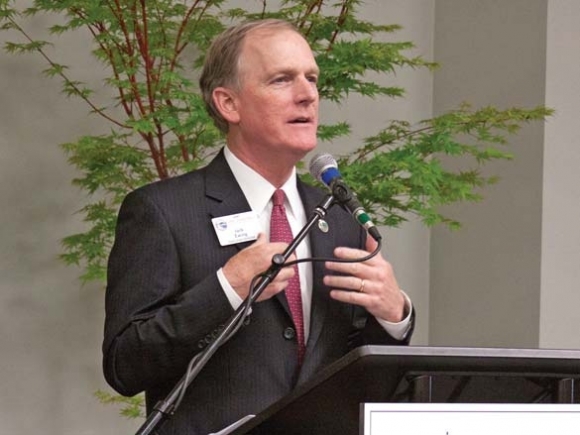 Over the past seven years Ewing has led Lake Junaluska following four guiding principles: clarity of mission, focus on place, support of staff and development of a sustainable business model.

“Jack brought a vision to Lake Junaluska, and over the last seven years he has helped us live into that vision,” said Mike Warren, chairman of the Lake Junaluska Board of Trustees. “Lake Junaluska has thrived under his exceptional leadership, and the guiding principles he put in place will ensure that it continues to thrive well into the future.”

Anyone who has visited Lake Junaluska over the past seven years has likely heard the mission statement: to be a place of Christian hospitality where lives are transformed through renewal of soul, mind and body. Not only have the staff and community learned and owned the mission statement under Ewing’s leadership, it is also the foundation for everything the organization does.

Part of living into the mission statement is tied to place — Lake Junaluska is often referred to as “holy ground.” Ewing’s emphasis on the maintenance, care and appearance of the grounds has contributed to the success of Lake Junaluska and its popularity as a recreation destination.

Under Ewing’s leadership, Lake Junaluska developed a sustainable business model following the loss of operational support from The United Methodist Church. The organization not only focused on “living within our means” but also reinvested in facility improvements that added value to the community and guests who visited Lake Junaluska. Over the past seven years, $7.5 million has been invested into improvements of the hotels, meeting spaces, dining hall and other facilities.

Ewing’s leadership is also marked by the development and nurturing of staff through motivation by encouragement, recognition and reward. The staff has shared in the financial success of the organization through profit sharing during Jack’s tenure.

“I am so grateful for the opportunity to serve Lake Junaluska these last seven years. I feel good about what we have achieved, but am most proud that we have always tried to do the right thing,” said Ewing. “We are looking forward to spending more time with our children and grandchildren as well as traveling.”

When Ewing started as executive director of Lake Junaluska in January 2011, he brought to the position 35 years of experience in higher education. He served as president of two United Methodist institutions of higher education—Dakota Wesleyan University and The University of Mount Union. Immediately prior to Lake Junaluska, he was the executive director of the Foundation for Evangelism, an organization focused on leadership development in The United Methodist Church.

Ewing, who turned 65 in March, began conversations in June with Chairman Mike Warren of his plans to retire at the end of 2017 and informed the Board of Trustees of his plans today.

“During this interim period, we will rely on our strong, seasoned executive team to direct the important activities of Lake Junaluska,” said Warren. “I intend to be directly involved on a regular basis with the team to provide support for the organization during this transition.”

The community is invited to a celebration of Jack Ewing’s leadership at Lake Junaluska on Dec. 29. More information will be announced soon.

Lake Junaluska is a place of Christian hospitality where lives are transformed through renewal of soul, mind and body. For more information about Lake Junaluska, visit www.lakejunaluska.com.