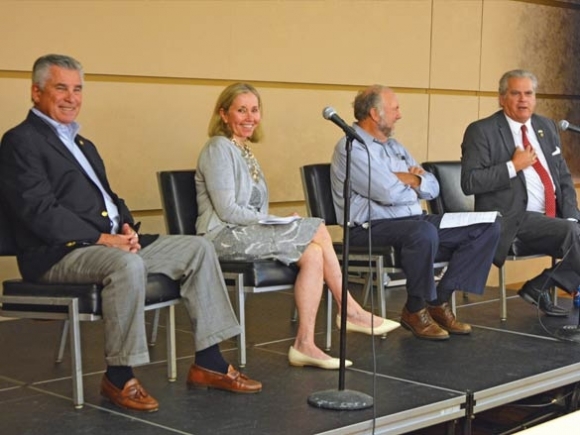 Thus it’s no surprise that there’s a substantial group of regional players looking to maintain and expand its presence in the area.

“Swain County has the highest sales tax income of any county in my district, which is impressive,” said Sen. Jim Davis, R-Franklin, who was part of a legislative panel discussion at the conference. “The Great Smoky Mountains Railroad has really put them on the map, and if you visited Bryson City 20 years ago, you’d be amazed today.”

Davis represents all counties west of Buncombe and chairs the Senate Transportation Committee.

“I think that’s why Sen. Berger appointed me to the Transportation Committee — I do 630 miles a week on the highways,” he joked, referring to his drive from Raleigh to Franklin during the legislative session.

All freight, Davis noted, stops in Jackson County, with Jackson Paper in Sylva.

“Freight’s not economically viable due to millions needed in bridge and trestle repair needs,” he said.

But that doesn’t mean Davis is opposed to prioritizing transportation; he said he’s heading to Washington, D.C., soon to discuss federal funds for dredging.

To have a local senator chair the Senate’s Transportation Committee is a huge bonus for WNC, but the region is well represented in the legislature.

Asheville’s Democratic Sen. Terry Van Duyn is a member of Davis’ committee and was also at the event.

“I think for Americans, trains are in our DNA. They totally changed life in America,” said the Chicago native who once flipped burgers in her family’s train-themed restaurant.

Burnsville Republican Rep. Michele Presnell, who was not at the conference, lends further local influence in the House, where she co-chairs the Appropriations — Transportation Committee.

Asheville Republican Congressman Mark Meadows sits on the U.S. House’s Transportation and Infrastructure Committee and wasn’t present, but did have a representative in the crowd.

With all that local influence in all the right places, WNC is nicely positioned to take advantage of opportunities to bolster its rail economy.

Killian cautioned that railroads wouldn’t expand their Haywood County presence until there is enough industry to support it.

One such place could be the former Lea Industries facility, located behind the new Ingles in Hazelwood, according to Mark Clasby of the Haywood Economic Development Council. He said that an old rail spur that had been torn up could be reinstalled relatively inexpensively.

He also said that passenger or excursion service would be most welcome and could revitalize Waynesville’s Frog Level district — something that would be great for tourism.

“We would like to see an excursion line come in to the area,” said Lynn Collins, executive director of the Haywood County Tourism Development Authority and member of the WNC Rail Committee. “Any additional rail service would be good for economic development.”