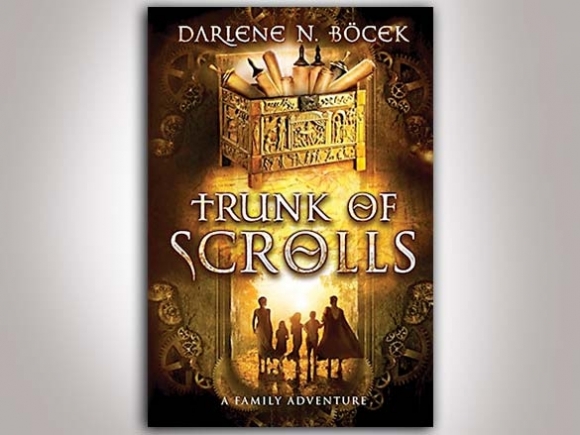 At any rate, Dr. Hood held our Byzantine history seminar in his home, where he served up bowls of shelled peanuts and glasses of cold apple cider. For years afterward, whenever I saw the name Byzantium, the mingled flavors of nuts and cider touched my tongue.

That gustatory ghost revisited me on opening Darlene N. Bocek’s Trunk of Scrolls: A Family Adventure (Entrust Source Publishers, 2016, 347 pages). Here Bocek whisks us back in time to sixth century Antioch, a jewel of a city in the crown of Byzantium. The empire is in trouble. Enemies plague its borders, and conspirators within the court seek to overthrow the emperor. Antioch is twice stricken with disastrous earthquakes, heresy is tearing apart the Christian community, and two of the empire’s best-remembered men, the general Belisarius and the emperor Justinian, find themselves caught up in the ferment of palace intrigue and backroom deals.

Three young people stand at the heart of Trunk of Scrolls: the narrator Marcellus and his second cousins, Byziana and Justin. As the novel progresses, their fortunes and their religious beliefs become entangled with the historical events surrounding them: the religious battles between the Monophysites, who deny the dual nature of Christ, and the Chalcedonians, who proclaim Christ true-god and true-man; the wreckage wrought by the earthquakes; the political struggles in the capitol city, Constantinople.

Marcellus brings this long-lost world to life for readers as he faces arduous trials and continuous adversity. He has long loved Byziana, but her father selects Belisarius for her future husband. Captured by Goths, Marcellus spends three years as a slave, gains the trust and admiration of the king, and brings him to the Christian faith. Returning home, he not only faces the horrific earthquakes, which destroy much of the city and kill tens of thousands of people, but he also finds himself embroiled in family conflicts, forced by circumstances to put aside his plans for an education in Athens and to step up as the head of his household and protector of his cousins. In addition, Marcellus must also again and again defend the ancient trunkful of Biblical scrolls, having promised his dying aunt to see that these precious manuscripts would come to no harm.

Darlene Bocek and her husband are Protestant missionaries living in Izmir, Turkey, heart of old Byzantium, and her familiarity with both Turkish history and geography give this novel its authenticity. When we leave its pages, we depart with a deeper understanding of that lost empire. Bocek also gives us insights into the importance of the struggles over faith taking place at the time, showing us, along with Byziana, Justin, and Marcellus, why the truth of a belief matters.

We also come away with a deeper understanding of Christianity in its adolescence. There are many reasons Christianity spread so rapidly in the ancient world — the fervency of its believers, the spiritual emptiness of the Roman pantheon of gods, even the vast network of Roman roads and Rome’s command of the Mediterranean. Yet a major factor in its popularity was Christianity’s radical take on the human condition. Concepts like “love one another” and “forgive seventy times seven;” the defense of the weak and the poor; the concept that slave and master, male and female, were equal in the eyes of heaven: these ideas created earthquakes of their own, toppling the old gods and shaking worn philosophies.

Finally, Bocek creates believable characters caught up in a whirlwind of world-shaking events. An example: Gaius Justus, the wealthy, aristocratic father of Byziana and Justin, begins Trunk Of Scrolls as a man of pride and accomplishment, a city patriarch who rules his family with a firm but loving hand, yet his self-pride eventually leads to disgrace and poverty. Lady Sophia, his wife, continues to love her husband even as she disagrees with his Monophyism. Both she and Marcellus’s mother remind us that women in both the Roman Empire and its successor, the Byzantine Empire, wielded power and influence in the home and over their husbands.

One caveat: Trunk Of Scrolls examines a period of history unfamiliar to many readers. Though at the end of the book Bocek offers readers a helpful website, a timeline, and some additional information on the era, she pays her reader a compliment by assuming they possess some historical knowledge of Byzantium.

Many who take up this novel, however, may have never have heard of the Greens and the Blues, the parties who supported chariots racing under these colors and who often turned to mob violence after a race. Many will be unfamiliar with the Nika Revolt, the earthquakes, or the leaders of this fabulous empire. To enjoy this story more fully, readers might spend a few minutes perusing darlenebocek.com or other websites dealing with Byzantium.

Here then is a fine novel that both entertains and educates.