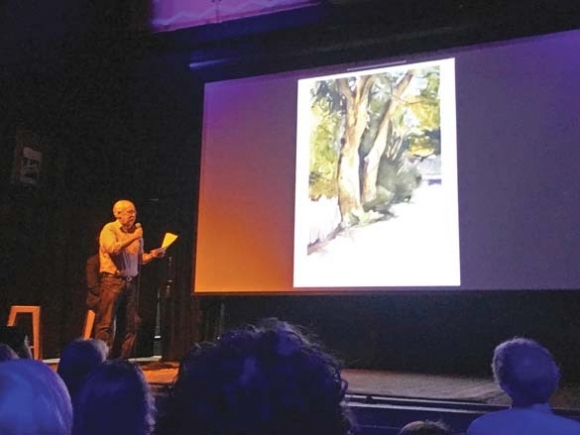 What if you could see sounds and hear pictures?

About 4 percent of people across the world possess a rare ability that allows them to do just that. It’s called synesthesia, which Dr. Michael Vavra insists isn’t a disorder or even a medical condition.

Vavra presented background on the relatively exotic genetic trait to an eager audience during a talk sponsored by the Haywood County Arts Council at Waynesville’s Strand Theater Sept. 13.

Those so endowed can experience a variety of symptoms, often associated with abstract concepts like measurements of time; Vavra presented one example of a woman who “sees” the names of months before her eyes when they are mentioned.

Others subliminally assign colors to numbers, which they, too, can see; Vavra even mentioned one man in England who experienced taste sensations stemming from the names of stations on London’s Underground subway system.

Some of the tastes experienced by the man, Vavra said, were unpleasant and caused the man to avoid certain “distasteful” stations.

But overall, Vavra said most who experience synesthesia describe it as a pleasant experience; although it can be temporarily induced by certain psychotropic drugs like LSD and mescaline, synesthesia is never completely debilitating, and in some circumstances can actually be useful.

Artists, for example, experience the sensation on average at eight times the rate of the rest of the population.

Joining Vavra on stage was one such artist — Kenneth Frazelle.

Although the North Carolina native Frazelle stressed that he’s never been clinically diagnosed with synesthesia, he says he’s experienced it throughout his life.

Thus, it’s not surprising that Frazelle is a talented watercolorist who also works in the music industry as a composer.

During his presentation, Frazelle spoke of how he was able see visual elements of sound, and hear music in paintings he’d seen.

He’s not just a lay observer, however; his credentials are impressive, to say the least.

Frazelle’s music has been performed by artists as prominent as Yo-Yo Ma, Jeffrey Kahane and Emmanuel Ax; he’s been commissioned by the Ravinia Festival as well as Charleston’s Spoleto, held residencies with the Los Angeles Chamber Orchestra, attended the North Carolina School of the Arts and later studied at Julliard under legendary American composer Roger Sessions, who also taught such luminaries as Elmer Bernstein and Pulitzer Prize-winning composer Leon Kirchner.

“Brassy,” he said, alluding to the way modern language can be used to mix the senses between visual and audio artistry. “Some paintings I see I can only describe as brassy.”