Giving back at Goodyacre: Ambitious plans in play at Canton area farm 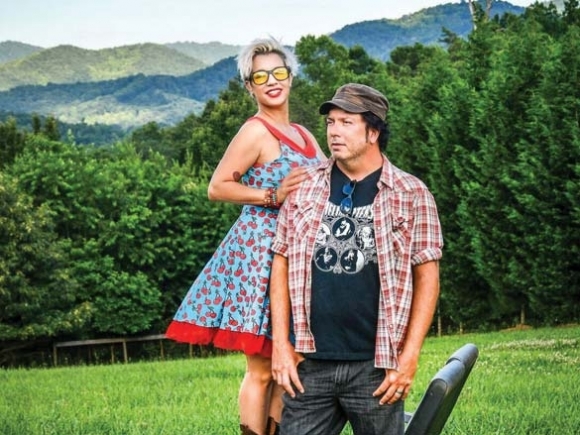 At one time or another, many of us have thought about giving up on the hustling, bustling daily life of the modern world — especially on those mornings where you wake up feeling like Charles Bukowski.

Two Canton residents lucky enough to do so are so grateful for the opportunity that their first instinct was to give back.

“I was in pharmaceuticals, and then went into device sales for about 15 years,” said Nicole Yerry, who with her partner Joe Yerry owns a 5.5-acre farm on Reed Cove Road, just south of downtown Canton.

Purchased in May 2016, the farm was once home to cattle and then to tobacco, but old timers will remember when it was part of a golf course; now it serves as home to the two former New Yorkers, who have been full-time on the property since relocating from Raleigh last November.

“I was never home, I was working crazy hours, I was never happy with the tension and stress and all of that,” Nicole said.

She and Joe share the farm with two dogs, two donkeys, two pigs, 21 chickens, a cow, three alpacas and four goats — many of which are rescues and all of which are named after musicians, including a cat named Jagger.

“When I stopped chasing the dollar, I sort of looked for what might feed my soul,” she said. “That led me to animals.”

It also led her to the farm, which, with its various pastures and outbuildings, allows ample space for the other things that feed her soul.

Although Joe and Nicole still occasionally find a golf ball here and there, most recently the property has taken on a decidedly equestrian air.

“Basically what I think the previous owner was trying to do was build a Versace horse farm,” Joe said, gesturing towards the chocolate raspberry paint and rusty ironwork accenting the barns. “It’s amazing, when you look at the building quality, and some of the things the previous owner did.”

Everything, Joe said, is overbuilt and has a marked attention to detail and comfort, including the heated concrete floors inside one of the barns. 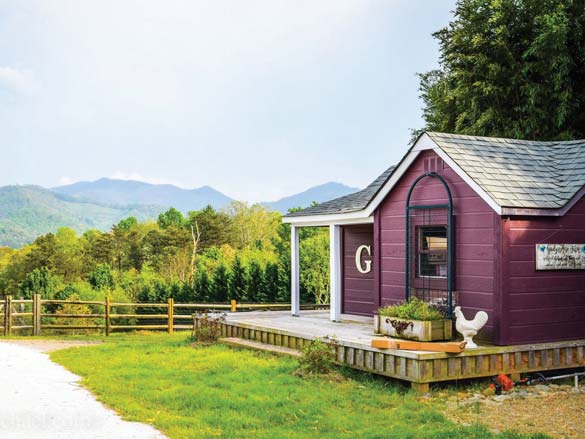 “The owner spent the better part of a year sitting up here, grading, and checking to see where the sun hits,” Nicole said, explaining the stained-glass windows on a portico near the horse paddock. “When the sun starts setting, it illuminates and it gets a weird kind of energy going.”

Paramount among the buildings is a sprawling, 9,000-square-foot covered riding arena.

“My background is mostly all music based, said Joe, whose band The Bleeding Hearts has three releases to its credit and has been described as an amalgam of Cheap Trick, Kiss and Thin Lizzy. “I’ve been in bands since I was a teenager; in the ‘90s, I worked in the corporate world for Borders, the book chain. I was pretty high up in there and I did a lot of events coordination. That’s kind of where this whole thing started. But for the last 14 years prior to coming up here, I was bartending and playing in bands and booking shows for the places I worked at.”

“I just want to do things that are different. I know you can find this stuff in bigger cities, but not yet here,” he said.

It is that spirit that motivated the two to host a family-friendly benefit for some of Haywood County’s assorted fire departments that responded to a nearby wildfire last year.

Called “The Goodyacre Music Festival,” the event will take place on Sept. 30 and features live music from noon to 9 p.m.

But perhaps the most ambitious — and most impactful — way the Yerrys hope to use the farm is in shaping the next generation of Haywood County dreamers and doers.

After her own pregnancy, Nicole began her search for educational options, which led her to Sacred Mountain Sanctuary in Candler, where she met Jennifer Brantley.

“I’ve been teaching in all kinds of different programs for over 10 years,” said Brantley, who holds a graduate degree in fine art.

Brantley got her start in Washington, D.C. and has worked in both private and charter school environments.

“About five years ago, I got into Waldorf education and realized how immensely beautiful it is to teach in that modality,” she said. “It embraces the holistic quality of each child — teaching to their head, their heart and their hands.”

For the last couple of years, Brantley’s been itching to open her own school, which, thanks to the Yerrys, she’s now done.

“Nicole and Joe’s child used to go to the school I taught at last year, and when I told him that I was looking to start my own program but don’t have my own land yet, they said, ‘Come look at our farm.’”

Brantley said she needed a beautiful, inspiring place to work; Goodyacre — atop a rolling hill with stunning views of Cold Mountain — was just the place.

“It needed to be an impeccable situation where the owners were super excited about it, and I was too,” she said.

The result is Little Acorn preschool and kindergarten.

“It’s a Montessori and Waldorf-inspired program that embraces natural connections, the arts and music,” Brantley said. “It also embraces the animals we have here, and teaches children how to connect not only with nature but with animals, which brings out a sense of strength and courage in the children, and also a sense of responsibility — a connection to mother Earth.”

This year, Haywood County’s public school system was once again ranked 11th in the state, out of 115 districts, so what does a Montessori or Waldorf program like Brantley’s bring to the table?

“If you ask anyone, parents or teachers, they love Waldorf education,” she said. “A lot of public schools are starting to embrace a Waldorf-inspired model because they’re feeling that this no child left behind stuff is leaving children behind and parents behind.”

In keeping with the spirit of the holistic nature of the curriculum, Brantley said she doesn’t just concentrate on the students.

“In my experience, families really need support while going through the educational process,” she said. “I also understand what it’s like to be single parent, and sadly, most of the families I work with as a teacher, they’re single parents.”

As an example, Brantley said she hopes to bring a cooking program into the classroom — which currently doubles as an Airbnb on weekends — that would, at least for one night a week, relieve some of the burden on their parents.

“Children love to cook and help be part of that,” she said. “When they’re preparing something, they want to eat it — twice as much!”

Brantley has two students enrolled this year, but only sees a maximum capacity of 6 to 8 children for the full day and half-day programs.

But like everything else at Goodyacre Farm — the goats and the gigs and the school and all the rest of it — there’s only room to grow within the Yerry’s vision of giving back.

Learn more about Goodyacre Farm at www.goodyacrefarm.com. Information on Little Acorn will soon be available at http://lapknc.com.