Making memories, one trip at a time 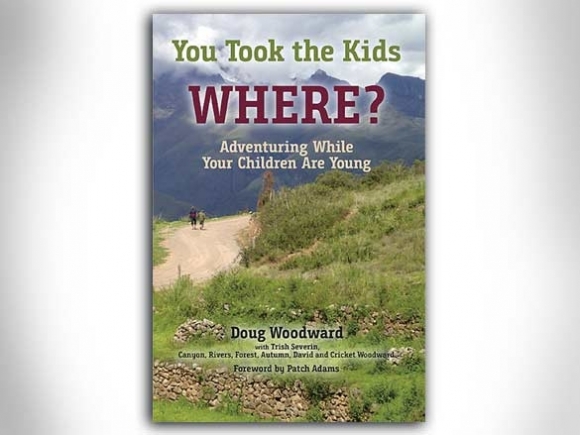 After reading Doug Woodward’s book You Took the Kids WHERE? and as I write these words, it is still officially summer. Despite its somewhat deceptive title, this book is not about “how I spent my summer vacation,” or even your usual travel memoir. With a foreword by legendary alternative medical doctor and cultural icon Patch Adams, this book explores new territory in terms of family relationships and outdoor adventure.

Woodward has always had a penchant for taking risks and breaking new ground, and like his well-documented Xtreme whitewater history and notoriety, this history of his family’s travels through the years falls right in line with that storyline. In short, this book reads like high-adventure fiction. Only this is not fiction. This is a memoir.

A page-turner in extremely well-written and well-edited prose, this book by longtime Macon County, North Carolina, resident Doug Woodward takes us on a lifetime journey with his family in tow to places such as the Northern Cascades in Washington State, British Columbia, the Grand Canyon, Alaska, Guatemala, India, Nepal, Peru and New Zealand. We’re there with the Woodard family for all the thrills and faux-pas that adventure travel brings.

Doug Woodward and Trish Severin have spent decades introducing their children to the value of living at ease in the wilds of nature, as well as learning lessons from people who live much simpler lives than do most of us in the United States. In addition to a lengthy 50-page appendix listing details of necessary equipment and considerations for traveling in the wild, backpacking, biking and running rivers, these pages come alive with exciting family adventures and blend with the philosophy of why these parents would choose such paths. Their now-adult children also reflect on how this upbringing has given them the confidence to move with assurance in whatever environment they may find themselves, relating to family, friends, and strangers in ways that most children rarely understand at an early age, if ever.

In a touching passage from the chapter “Journey of the Heart,” the Woodwards’ trip to northern Peru, he writes: “On the street it is pouring rain and folks quickly scoot from the shelter of one doorway or overhang to another. The night is chilly, but our i-tech raingear and warm layers keep us snug and warm. Our eyes sweep the street, alive with dancing puddles. There are many possibilities for our leftover food. We decide on a group of three small children huddled against the wall on the opposite sidewalk. In a matter of seconds we are there. A light comes to the eyes of one of the children — a light that we will remember all our lives as she discovers the food and rushes to show her two friends. By the time we’ve re-crossed the street, the rare treat is already being devoured. For one brief moment, light has shown through the rain and we and the children have touched. They have taught us one more lesson in love, and it is for this that we are here.”

Later, in the chapter “The Far North” describing their adventures 100 miles north of the Arctic Circle on Alaska’s Noatak River, Woodward writes: “Backs ache, arms ache, butts ache. We’ve been churning against the wind for eleven hours, the last hour and a half alongside Kinuk Island, the final piece of the Noatak Delta. The temptation to stop and camp is overwhelming. At 10 p.m., we slide past the downstream tip of Kinuk with only a huge question mark ahead of us. Ten miles of open ocean. Black night. Exhausted bodies. Are we being smart or stupid to leave all land behind and commit to crossing at this late hour?”

Here we have an example of the kind of on-the-edge drama that pervades much of the book and which makes it such a page-turner. In this “what next” saga that spans 30 years of parenting and global exploration, we are not only treated to the descriptive travel writing about the locations that were part of this journey, but the individual and social lessons learned from these trips beyond the borders of a safe and protected lifestyle.

Or as Woodward writes in his Preface: “As important as community and friendships are, there is another world beyond the familiar everyday routine of school, sports and the activities which so much of our present society considers necessary for filling a child’s schedule. It is a world which offers the seeds and tools for understanding those whose lives are quite different from our own. One which presents lessons in self-evaluation and an ability to walk easily on this earth, whether it be on the streets of Kathmandu or in the forests of the Amazon.”

As a huge bonus, You Took the Kids WHERE? is illustrated with dozens of appropriately pithy colored photos which would allow one to turn the pages as a flip book with the pictures telling the story which is so elegantly told through Woodward’s prose.  Pictures of the Woodward family biking on the Oregon coast with toddlers in tow in bike seats and trailers. Pictures of Doug’s five-year-old son Canyon at the oars of a large raft on Utah’s Green River. Pictures of a bicycle bus full of toddlers on a street in New Delhi, India. Pictures of members of the Woodward family with bears, caribou and foxes. Pictures of Doug’s two boys kayaking down the rapids of the Five Falls section of the Chattooga River. All of these positioned alongside the appropriate text and in living color. And all of this in a book which has its roots in the fertile soil of a mind that is focused on the betterment of his family and of mankind.

Or as Patch Adams says in his Foreword: “There is no magic wand that can transform all families into ones like Trish and Doug’s. Their family is quite unique. Their adventures did not happen because they were rich. They were able to travel because of their conviction and determination toward healthy parenting. And healthy parenting is connected to a healthy future for all of us.”

Thomas Crowe is a regular writer for The Smoky Mountain News. He is the author of Postcards From Peru, a poetry and prose collection chronicling his trip to Peru in 2003. He can be reached at This email address is being protected from spambots. You need JavaScript enabled to view it.

Doug Woodward will talk about and read from his book at 6:30 p.m. on Sept. 22 at City Lights Bookstore in Sylva.