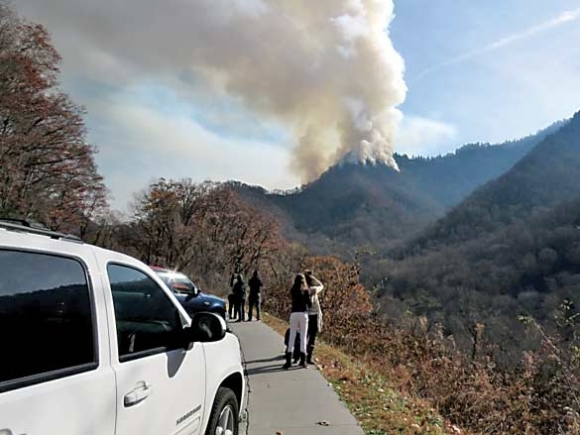 Nine months after a small wildfire in the Great Smoky Mountains National Park metastasized into a deadly blaze that wreaked havoc on Gatlinburg and Pigeon Forge, Tennessee, a report reviewing the National Park Service’s decisions and actions leading up to the Nov. 28 firestorm has been released.

While some things could have been done differently and wildfire preparedness should improve, everyone responding to the fire “simply did the best they could” with the experience level they had, Stutler said. Unfortunately, the blaze defied the experience of the many seasoned professionals who work at the park.

“The fire wasn’t really one that was typical of eastern Tennessee but more akin to a wildfire experience in Southern California,” Bill Kaage, chief of the National Park Service Fire and Aviation Division, said during the press conference.

Severe drought coupled with rugged terrain and a violent windstorm with measured gusts of nearly 90 miles per hour caused fire behavior Stutler said had never been seen in the history of the park. For example, he said, “a number of people who lived here for years always thought that drainages would hold fire. That was not the case.”

Part of the blueprint

While the review team concluded that the park’s decisions in responding to the fire made sense, the report pointed out several shortcomings in the park’s organizational structure and preparedness, listing recommendations to prevent similar outcomes in the future.

Smokies Superintendent Cassius Cash said that the park “embraces” the findings and recommendations in the report and that the review will provide an opportunity for “healthy discussion” resulting in a stronger program going forward.

“I will assure you this will not be a document that sits on the shelf and collects dust,” he said during the press conference. “It will be used to strengthen our program, improve our response to other disasters and storms that we know we’re going to have. This document will now become part of our blueprint.”

The report is based on three months of research and interviews with personnel and leadership involved with the Chimney Tops 2 Fire. The team finished its final draft document in early July and a completed report in early August, which was then sent to National Park Service leadership for validation before its release to the public. The team looked only at Park Service actions from the fire’s start Nov. 23 to the time it left park boundaries at 6 p.m. Nov. 28. The goal was to understand the minute-by-minute decisions made and how they made sense to those in charge.

The independent review team, led by 50-year fire management veteran Stutler, consisted of seven members from a variety of states, agencies and specialties, none of whom were associated with the Smokies.

Among others, the review delivered three recommendations categorized as being likely to deliver a different result should a similar fire situation occur in the future — one of those had to do with the way fire management officers are trained.

Currently, the Park Service has no mentor or leadership development program for fire management officers or agency administrators, and those staff members are often “faced with managerial and leadership challenges where they have little to no experience,” the report says — a mentorship program would go a long way toward ensuring the people in those positions are prepared to execute them well in an emergency.

In the particular case of the Chimney Tops 2 Fire, the fire management officer had been in the position for only eight months, and while he had many years of experience as a wildland firefighter, he wasn’t well trained in the complexities of his new job.

“It gets to a situation of overload of an individual being able to address all the incoming information and make sound decisions,” Kaage said when asked why it’s important to separate those roles.

While the multiple role situation is against policy, Kaage said, it’s something that he’s seen in various other Park Service units and federal agencies. According to the report, it happened in this instance because many of the park’s fire staff members were on vacation for Thanksgiving. The fire management officer felt that giving them that time off was the right thing to do, and initially he “did not have a sense of urgency from the Chimney Tops 2 Fire due to the low fire behavior.”

Communication challenges also had an impact on firefighting efforts, the report said. As the fire grew, the park began to collaborate with the Gatlinburg Fire Department.

However, the two organizations operate on different types of radio systems — neither had the ability to operate on the other’s system. Also, cell coverage in the park is sparse at best, service went out completely as the fire got worse and Gatlinburg eventually lost its internet-based phone system.

“Personal communication was also problematic on this incident,” the report reads. “Though the park issued daily information releases regarding the fire, the city did not feel they had any direct advance communication from the National Park Service regarding this fire, what it was doing or what actions were being taken.”

The park is hoping to rectify the radio situation soon through a capital campaign that Friends of the Smokies recently launched to raise $2.5 million to upgrade the park’s emergency radio systems. The new communications system would allow the park’s emergency responders to communicate with local departments and include capacity for multiple simultaneous incidents. In addition, the park hopes to receive funding from the Department of the Interior Rural Fire Readiness Program to issue portable radios and personal protective equipment to seven neighboring fire departments.

The report includes a variety of additional findings, such as inadequate requests for additional resources considering the severity of fire danger, a chain of command susceptible to a lack of oversight of decisions made and a lack of a red flag weather warning issued from the National Weather Service despite the conditions.

Finally, the report points out how often people involved in the fire response told the review team that they’d never imagined anything like this could happen in the Smokies.  The first recommendation tagged as likely to lead to a different outcome in the future was that the park should start expecting that this type of event will happen again.

“Unless Great Smoky Mountains National Park and the National Park Service is fundamentally willing to accept and lead social and cultural change to address the future of wildland fire at the park and surrounding landscapes, history will be repeated,” the report said. “This condition is the ‘new normal’ for the park and adjacent stakeholders.”

When questioned during the press conference, Stutler was unwilling to link that finding to any position on climate change. However, he reiterated that “fires like this will become commonplace.”

“When I started my career, Lyndon Johnson was president. You can do the math,” Stutler said. “A 5,000-acre fire was a big deal. A big deal.”

These days, a 5,000-acre fire is unlikely to even make the national news — currently, wildfires in Montana totaling more than 500,000 acres are struggling for coverage.

“We’re going to have to learn to live with wildfire,” Stutler said. “Across the country.”

The Chimney Tops 2 Fire Review is available in its entirety at https://www.wildfirelessons.net/viewdocument/chimney-tops-2-fire-review-2017.