A predictable story of love, but one well told 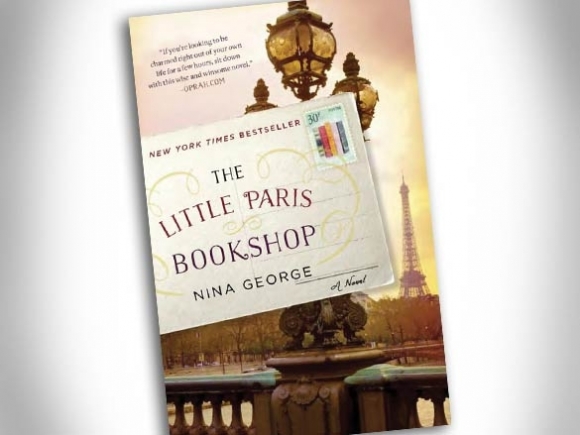 It is late in the day, and 60-year-old Marianne Messmann of Germany stands on the Pont Neuf in Paris. She has arranged her shoes, coat, wedding ring, and purse on the pavement beneath the bench where she is sitting. Now she climbs the parapet of the bridge, stares into the Seine, and throws herself into the river, determined to free herself from the misery of her life and marriage.

Her death is thwarted when a stranger dives into the water and saves her. Angry with her rescuer, furious to be put into a hospital, and sickened by her boor of a husband and his lack of regard for her, Marianne escapes from the hospital and her husband, and makes her way to Brittany, that corner of France on the ocean that also goes by the name “the end of the world.” Here she intends to complete her suicide.

Instead of being swept away by the waves of the ocean, however, Marianne is swept up by the waves of life. She bumbles into a job as a waitress at Ar Mor (the sea), a restaurant where she meets such characters as Genevieve, the hot-tempered owner who has lived with unrequited love for a quarter of a century; the chef, Jean Remy, who desperately loves Laurine, the waitress, but can’t bring himself to tell her so; Paul, a patron with a secret past and a lingering love for his divorced wife; Emile and Pascale, an elderly couple, artists who suffer the ravages of old age, but who love each other as fiercely as ever.

In The Little Paris Bookshop, which I reviewed with high enthusiasm in The Smoky Mountain News two years ago, novelist Nina George gave us a fine story about love and the costs of love, about books, about the simple pleasures of living well. Now, in The Little French Bistro (Crown Publishing, 2017, 311 pages), George takes us back to France and to the subject of love: how much we need it, how clumsily we sometimes practice it, how life and fate may give us a second chance to love just when we are sure our hearts are dead.

Both of these novels mirror each other in terms of theme and characters. In The Little Paris Bookshop, George centered her story on Monsieur Perdu (which means lost in French), owner of a bookshop on a Parisian barge, who sets off to discover the fate of a long-lost lover. During this quixotic journey, he picks up a variety of new friends, most of whom are themselves struggling with affairs of the heart.

Similarly, in The Little French Bistro, Marianne leaves her husband Lother Messmann (dung seller) and goes in search first for death and then for life. As she encounters new people and places, she gains more confidence in her talents, even allowing herself the possibility of love. Through the stories of the people Marianne draws to her, we enter into a kaleidoscope of love, ever-changing reflections of the ardor and affection shining in the heart, ranging from Jean Remy’s stifled adoration of Laurine to the sweet companionship of the aged Emile and Pascale.

Like the earlier novel, The Little French Bistro also offers other gifts to its readers. Through her descriptions of the sea, the weather, food and drink, music and dance, George once again celebrates life and the idea of living to the hilt, to take our pleasure in the small and simple events — delicious meals, conversations with friends, solitary walks on the beach — brought to us by each passing day.

And as in the story of Jean Perdu, The Little French Bistro teems with aphorisms, demanding a pencil or a highlighter. Looking out over Kerduc Harbor one early morning, with lightning flickering silently above the sleeping village, Marianne thinks “You cannot tell love to come and stay forever. You can only welcome it when it comes, like the summer or the autumn, and when its time is up and it’s gone, then it’s gone.” “One might have to be a little ruthless to seize back control of one’s life, don’t you think?” an artist tells Marianne. Reviewing her long-ago love for Alain, Genevieve thinks: “When you’re young, and don’t know anything about love and the world, it’s natural to think and act stupidly.”

Now, having touted The Little French Bistro, I took a few minutes to look at some online reviews by readers. Many liked the novel for the reasons cited above. Many commended George for her sensuous prose, her humor (which is there), and her romantic views of love and life.

Others disliked The Little French Bistro for the same reasons. Too romantic, some proclaimed. Too optimistic about human nature. Too predictable. One reviewer wrote, “Maybe I am just a jaded and cranky old bat, but I did not enjoy this book.”

Well, yes. Maybe you are a cranky old bat. Jean Perdu, the bookseller in The Little Paris Bookshop, believes that books can mend broken hearts and souls. If you are broken, if you have lost at love or have committed some enormous wrong, if you love someone but can never tell them what you are feeling, if you feel the world around you has grown cold and grey, then Nina George, like her characters Perdu or Marianne, may be just the literary apothecary for you.

Of Marianne, George writes, “The sea offered her a song of bravery and love. It came from a long way away, as if someone somewhere in the world had sung it many years ago, for those on the shore who didn’t dare to take the plunge.”

She intends the same words for the rest of us.

Go ahead. Take the plunge.