In the words of Belushi, ‘I hate Illinois Nazis’ 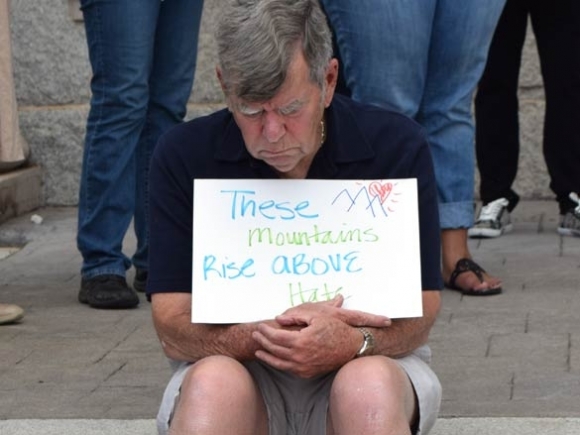 In the 1980 cult classic film “The Blues Brothers,” Jake and Elwood are stuck in traffic as a Nazi rally blocks the bridge they need to cross. When they ask a nearby police officer about what’s going on, the officer shrugs, “Ah, those bums won their court case, so they’re marching today.” Jake replies, “What bums?” The officer shoots back, “The f**ckin’ Nazi party.”

“Illinois Nazis,” Elwood mutters, to which Jake groans, “I hate Illinois Nazis.” The duo then pushes the gas pedal to the floor, veering towards the Nazis, forcing them to jump off the bridge and into the river to avoid being hit.

As a kid (and even now) watching that scene, I would laugh. “Yeah, take that, you Nazis,” I would think to myself. It was a funny scene. How absurd is it to want to be (and be) a Nazi in this day and age?

Well, that fringe movement, the last vestiges of the Third Reich, are gaining momentum in a modern era where racism and hate is disguised as “opinion and personal values,” where the Christian religion has been hijacked to push forward agendas that are alienating and discriminating to minorities.

It’s not that these Nazi and KKK groups are seemingly coming out of nowhere. They’ve always been here and have always spewed the same message of ignorance. The difference is we used to ignore them, not take them seriously. Have your march, and be off, you know? But, now, between the increasing violence between races, religious factions and urban/rural dichotomies in the post-9/11 world, these hate groups have found new footing, and new recruits.

I’ll be the first to say we shouldn’t whitewash history, especially in terms of the Civil War. I awoke this past Tuesday morning to the news of a Confederate soldier statue being torn down the previous evening in Durham. Blatantly waving the Confederate flag in someone’s face to get a negative reaction is bullshit. But, in terms of these memorials, they are in remembrance of a war — for good or ill — and we mustn’t sweep it under the rug the same way the exact issues were that led to the Civil War itself.

Which brings me to my next topic: Charlottesville. An explosive can of worms that has shaken this country over the last week. One killed, dozens injured when a car purposely plowed into a group of counter-protestors at an “Alt-Right” rally that included factions of the Nazi party and members of the KKK (permitted to hold the event).

The sad thing is this isn’t the first incident of its kind in the United States, nor will it be the last. Do the Nazis have a right to rally and march? Well, if you truly believe in the freedom of speech and freedom of assembly, two of the core amendments in the Bill of Rights and of our ever-evolving democracy, then yes, they do have the right to speak and assemble.

One wonders what would come of it if we just ignored the rally. What if there was no media coverage of it, no counter-protestors? What if we simply turned our backs to the hate aimed at getting us to jump up and shout back just as loud? The Nazis and the KKK want folks to get mad, they want a reaction of hate towards them, to stir up dark things inside you, to bring you down to their level so they can point the finger of shame back at you as they play victim.

John Oliver of HBO’s “Last Week Tonight” said it best — “Nazis are a lot like cats: if they like you, it’s probably because you’re feeding them ....” I don’t support anything the Nazis or KKK stand for, but I do support their right to say what they want to say. It’s the same right that allows me to write this weekly column about whatever I want to, and without fear of persecution.

What happened in Charlottesville was a national tragedy. And yet, I also look at it as a turning point in this ongoing, sinister dialogue of “us versus them” in America. These spectacles and rhetoric have existed for decades. Heck, centuries if you actually dive into the issue. But, with mass media and social media, we tend to play into it more these days, where we’re constantly inundated with the darkness and vile nature that revolves around such groups like the Nazis and KKK.

Good will always outnumber evil, even if it sometimes feels like a losing battle. Just remember that peace and compassion starts right in your own backyard. The “we” of truth and understanding amid a community coming together is at the heart of the healing process of which we in this country are in dire need.