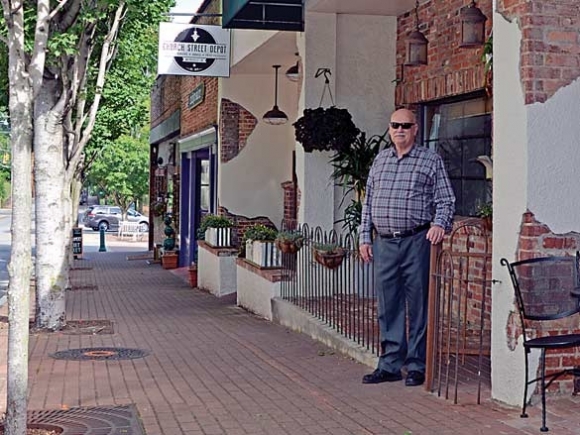 Richard Miller may have received the Entrepreneur of the Year award from the Haywood County Chamber of Commerce for 2017, but he’s been a driving force behind economic development in Waynesville for more than 30 years.

Not only is Miller an entrepreneur himself, but he also helps others develop, incubate and grow their own business. He’s also a downtown property owner who has taken great pride in the appearance of his storefronts, which is also a major investment in the downtown Waynesville district.

Today, he owns The Classic Wineseller, which is celebrating 20 years in business this year, and the new and popular burger joint Church Street Depot just a few doors down where The Smoky Mountain News was located for 14 years. Miller started The Patio and The Chef’s Table on Church Street before selling the businesses to their current owners.

“Richard Miller has been actively involved in the revitalization of downtown Waynesville since the early 1980s,” said Buffy Phillips, executive director of the Downtown Waynesville Association. “As a property owner, Richard was one of the first to renovate his buildings in the district, and in the years since, he has created eight retail storefronts, three office spaces, and two apartments.”

Miller’s success in Waynesville wasn’t some grand scheme meticulously planned out — it happened piece by piece since he purchased the corner building at the intersection of Main and Church streets in 1979. He actually has a degree in journalism from the University of Florida, but ended up working for his dad’s construction business when he realized how much money reporters make.

“I put out job applications when I graduated and Monsanto made me an offer to work on their in-house magazine making $12,000 a year gross,” he recalled. “And I said, ‘yeah, that’s gross’ and went to work for my dad in the construction industry.”

Miller came up from Fort Lauderdale in 1979 to visit some property he owned near the Jackson County line when his lunch at a local sandwich shop on Main Street changed his trajectory.

“I walked by the corner building that said it was for sale — didn’t think anything about it. Then I was looking through a real estate magazine while I was eating and it had a listing for the same building and then I was walking down by the courthouse and back up Main Street and passed a real estate office that had a picture of the same building for sale so I made an offer the next day and they accepted it,” Miller recounted.

The building, which now houses the kitchen supply store Home Tech, a few apartments upstairs and The Wineseller in the basement, was in bad shape when he bought it.  A part of the roof was caving in, tenants were threatening to move out because of the lack of repairs, and the town code enforcement was threatening to condemn the building if the repairs weren’t made. Miller had his hands full as soon as the property was in his name.

He decided to move to Waynesville full-time in 1984.

“I was a bartender at Maggie Valley Country Club at night and was here working on the building during the day,” he said.

The next year he bought the other three buildings on Church Street.

The Wineseller also started by strange circumstances. Miller said a man came to town wanting to lease space from him to start a gentlemen’s club.

“I told him he was ahead of his time and something like that wasn’t going to happen in this town, but he showed me his plans and told him to go for it,” Miller said.

The man also suggested Miller stock some wine in the cellar and he would sell it at his register — so Miller got a beer and wine license and stocked some great wine for the future gentlemen’s club.

“A couple days later this guy was gone. He just disappeared and I couldn’t find him anywhere,” Miller said. “So that’s how I got into the wine business.”

Twenty years later, The Classic Wineseller has an expansive and impressive stock of wine and craft beer, a kitchen serving Italian small plate dishes and live musical entertainment every weekend.

The Chef’s Table began as a wine bar before it became a restaurant. Miller later hired young Canton native Josh Monroe to be the chef when they added a kitchen. After working for Miller for about five years, he sold the business to Monroe.

Without Miller giving him that opportunity at such a young age, Monroe said he would have never been able to own his own restaurant at 25 years old.

“He definitely gave me the opportunity,” Monroe said. “The most important thing is he’s been the landlord too for many of these businesses. Some places are more afraid to take risks — they just look at the numbers upfront — but Richard appreciated high quality and gave us a chance to really do something in Waynesville that hadn’t been done. He was willing to play the long game with us and that’s what really helped us and those other businesses.”

Monroe has now operated The Chef’s Table for 13 years. Much of the farm-to-table menu comes from Monroe’s own farm in Canton. And just as it was ahead of its time for downtown Waynesville, so was Miller’s vision for The Classic Wineseller.

“Richard started a high-end wine shop 20 years ago when there was not much demand other than he liked it and now Waynesville is catching up with it,” Monroe said.

Waynesville has definitely changed a lot over the last 30 years. Miller said Main Street was mostly knickknack and trinket shops when he moved up here. It had jewelry and furniture shops, a drug store, grocery store, etc., but not the diverse downtown it is today.

While he’s not one to take much credit for his business success or wax poetic about his involvement in developing downtown, Miller has been instrumental in making Waynesville into an arts and culture mecca.

“As a visionary, Richard embraced mixed-used revitalization, well before in-fill development became popular,” Phillips said. “Richard is the co-founder of the Church Street Art & Craft Show, one of the region’s finest juried shows, now celebrating its 34th year in downtown.”

Miller and local artist Teresa Pennington started the Church Street Art & Craft Show. At the time, the outdoor seating between The Patio and The Wineseller didn’t exist — it was a street that connected to the back alley behind the Church Street businesses and down onto Montgomery Street. The arts show had about 22 booths, banjo player Marc Pruett’s band performed, and it was a success.

“The next year we went to the city council and requested to close Church Street to have it there, but they said ‘don’t bother, come on up to Main Street. We ran it for a few years and then DWA took it over,” Miller said.

Miller also served on the Haywood County Arts Council board and served as president for a year and a half until he had to resign after he started dating the executive director Kay Miller, who he married in 2009. He still serves on the Board of Directors for the Downtown Waynesville Association.

“Always willing to consult, share his expertise, or donate goods and services for special events, Richard continues to partner with the Downtown Waynesville Association and the Town of Waynesville in creating a thriving and prosperous central business district,” Phillips said.

Miller jokes that the most successful businesses he’s had are the ones he’s sold, but his wife Kay said to not let his self-deprecation fool you.

“He’s very creative when it comes to doing deals and putting details and financing together,” she said. “He has a gift for partnering together with others to make things work.”

It was partnering with investors that got the Church Street Depot open last year. Miller said it started as a conversation in The Wineseller with several people wanting to get a great burger place up and running. With investors on board, it meant Miller could start the business with no debt, which is the way to go.

‘It’s much easier to operate when you don’t have debt, and the investors don’t get anything unless we make money,” Miller said.

As with any business, Miller said doing the research is important — almost as important as offering consistent and high-quality products whether it’s food, wine or customer service. They searched all over for the perfect beef and the perfect bun. The depot offers local beef as well as a special blend of brisket and chuck made in Atlanta for a gastro pub.

“I got the bun I wanted — I fought long and hard for those buns,” Kay joked. “They don’t fall apart and they don’t get soggy. It just works perfectly for what we’re doing. We even altered the size of the patties to fit these buns.”

The positive reviews pouring in from the public prompted Kevin Sandefur, owner of BearWaters Brewing, to ask the Millers if they wanted to open a second location inside his new brewery in Canton.

While Richard said he wasn’t interested in having a second Depot, he did take the opportunity to expand his business operations to downtown Canton by opening the Pigeon River Grille inside BearWaters. The menu includes a different kind of burger plus an array of perfectly paired beer faire. And Miller is keeping it in the family with his brother and sister-in-law Doug and Jana Miller running the place.

When asked about the hardest part of starting a business, Miller said, “It’s all hard.” His advice for budding entrepreneurs is simple: “The first thing I tell them is to pay your taxes.” Seems like an obvious thing, but he’s seen many good businesses close up in Waynesville over the years over not paying their taxes.

When looking to Waynesville’s future, Miller said he hopes to continue to see a diverse mix of businesses and also hopes property owners can keep the rent prices at a reasonable rate for business owners to avoid more empty storefronts.

“We have to be careful with the rent prices in downtown because high rents lead to more vacancies,” he said. “What really makes Waynesville special are the people — everybody thinks it’s the atmosphere and surrounding mountains but when it comes down to it, people stay because of the people — they make you feel part of the community. I mean, what’s not to like about Waynesville?”