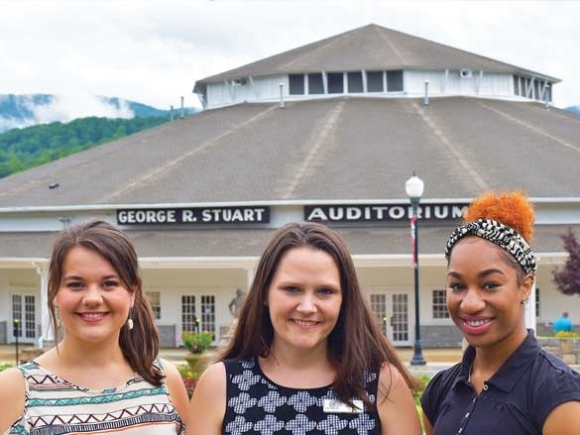 It’s not noteworthy to hear someone ‘round these parts say, “This will be the fourth generation of my family participating in a Fourth of July event at Lake Junaluska.”

But it is when it’s being said by the leader of the Lake Junaluska Singers.

“I have been seated in the audience many, many times, and my sons will be participating in the parade — like my grandmother and my dad did — but this will be my first time performing on the stage,” said Mary Huff, interim director of the Lake Junaluska Singers.

Although the first official parade wasn’t held until 1978, families have been making Lake Junaluska a Fourth of July tradition since at least the 1950s.

“There’s just so much going on,” said Mary Bates, marketing manager at Lake Junaluska. “Between the concerts, the parade, the picnic — we have a square dance going on this year, a family Olympics competition — it’s just such a fun time, it sells itself.”

“It’s been a huge tradition for a very long time,” said Jack Ewing, executive director of the Lake Junaluska Assembly. “The singers in their 60-year history have always done a concert on the Fourth of July.”

Last year’s Fourth of July appearance by the Singers was cancelled after the director’s abrupt resignation June 29, which was seen as the result of misconduct allegations brought by some singers against both the director and other singers.

Ewing cancelled the entire season — disappointing no one more than him — but Lake Junaluska officials made amends, enlisting award-winning gospel singer Nicole C. Mullen as a last-minute fill-in and making the shows free.

Huff’s the perfect choice for both preserving that history as well as adding some notes of her own.

“We have a varied repertoire, going from Dolly Parton to Appalachian folk music to music of the Armed Forces to some classical music and even a bit of Broadway,” she said. “Being from New York myself, that’s a genre of music that I am very pleased to share and I know a lot of people love very much.”

Furman alum Huff owns a home at Lake Junaluska but lives in New York City; she earned her Master of Music degree at Yale, did post-grad work at Westminster Choir College and founded the New York City Children’s Chorus at Madison Avenue Presbyterian Church, where her husband Andrew Henderson serves as director of music and organist.

Her work with the NYCCC has led to a number of appearances on well-known television shows like Saturday Night Live, Good Morning America and the Today Show, just to name a few.

“I’ve worked with a number of celebrities through my work in New York, and there’s only two circumstances in my life when I have been overwhelmed by celebrity,” she said.

Her first time — on Good Morning America — involved Will Ferrell, but her second hit a little closer to home.

“I was at the Blue Rooster [restaurant, in Clyde] last summer and I came across Marc Pruett,” she said.

“That happens to be my favorite band,” Huff said. “I went to talk to him, but I couldn’t, because I was so overwhelmed.”

Huff will have to figure out how to riff with Pruett — and quick; she revealed that the Singers will join Balsam Range for two numbers as the band kicks off festivities at Lake Junaluska on July 2.

On July 3, Grammy-winning contemporary Christian artist Laura Story will take the stage, but on the Fourth it belongs to Huff and the Singers, who will help reclaim the legacy of the vaunted group after last year’s interregnum.

“It’s very gratifying to have made that transition and to have found a marvelously talented director, and for her to be able to go through a very detailed process of finding incredibly talented young people, “ Ewing said.

“Things are going very well,” Huff said. “We have 16 very talented, very bright singers who also happen to be super nice people. They are great colleagues and they are making music at a very high level.”

The performances of the Lake Junaluska Singers have for decades earned them a cadre of loyal fans across the country and the world, and that same reputation is what draws young people, year after year, to become Singers themselves.

“I’d heard so many great things about Lake Junaluska,” said 2017 Singer LaDejia Biddle. “I go to Wingate University and my director, Kenney Potter, brags a lot about Lake Junaluska. A few of my friends were former singers from a couple years ago, and they talked about how much they enjoyed the experience, so I was really thrilled to apply."

Another singer offered a similar explanation.

“The chair of my music department sang with the Singers in the late ‘80s, and I think he did that a couple years in a row,” said Laura Hutchins, a student at High Point University. “It sounded like a lot of fun.”

It may be a lot of fun, but it’s also a lot of work that offers a tremendous opportunity for professional growth not found elsewhere.

“It’s a completely different experience coming here and being with 15 other people who absolutely love this and are very, very good,” Hutchins said. “It forces you to become better because you’re surrounded by so much talent.”

That talent attracts talent is no secret, but it also attracts fans of the type that will again pack Lake Junaluska, just like Huff, her dad, her grandmother, her children and countless others carrying on an old family tradition — Fourth of July at Lake Junaluska.