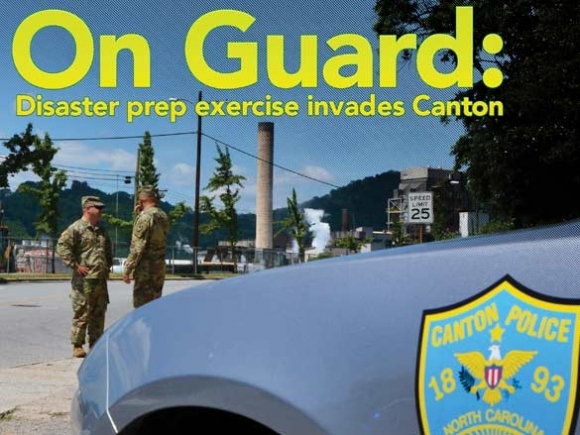 By the dawn’s early light, about 300 members of the North Carolina National Guard along with a host of local law enforcement personnel and first responders gathered at Guion Farm in nearby DuPont State Forest, outside Hendersonville the morning of June 8.

Two aircrew had ejected from their F-15 just before it augured in to the rocky dirt, sparking a large fire and kicking off a massive search and rescue mission.

Thankfully, that scenario was only an exercise, but as Operation Vigilant Catamount continued across several sites in Western North Carolina — including in Canton June 10 — regional disaster response teams found themselves dealing with disasters that seemed anything but fabricated. 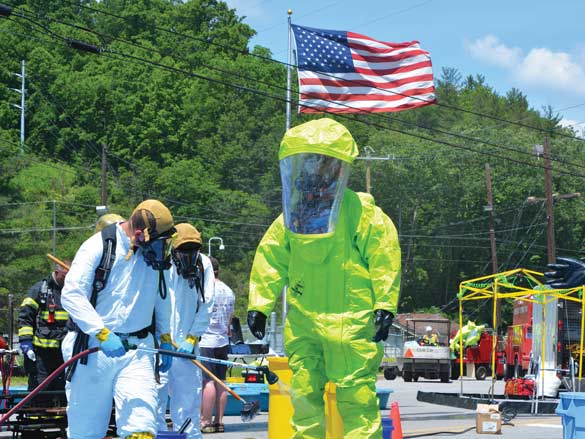 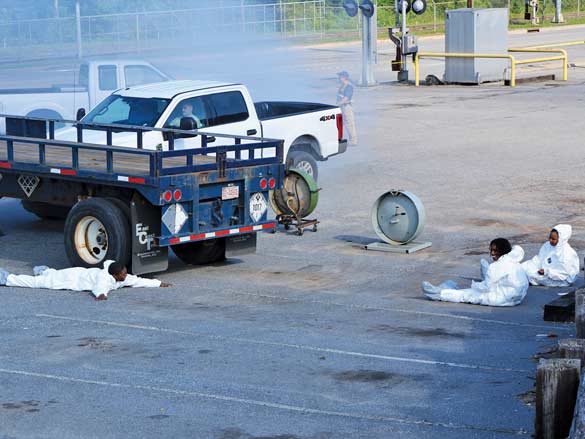 The DuPont exercise was but one phase of the operation, which also included simulated incidents at Fontana Dam, the Mt. Pisgah Observatory and the campus of WCU.

“The North Carolina National Guard contributes back to the community every day,” said Raleigh native and 36-year Army veteran Brigadier General John Byrd. “We live in these communities, so when we can do an exercise like this inside of North Carolina and bring in our inter-agency partners like local law enforcement and emergency management, it makes everybody stronger and builds those relationships.”

What those inter-agency partners in DuPont State Forest — including the Henderson, Jackson and Transylvania county Sherriff’s Departments — didn’t know was that the scenario would take a dramatic twist.

As the jet crash situation developed, it was revealed that one crew member was deceased and the other was injured and needed to be hoisted by helicopter from a remote clearing in the forest.

Even worse, information soon arrived suggesting that the aircraft was downed by a shoulder-fired missile from a domestic terrorist; local law enforcement found two of the four insurgents after an hours-long manhunt in the rainy, rugged mountain wilderness.

“Any time you have an operation this complex, there’s a lot of moving parts,” Byrd said. “But based on everything that I’ve seen so far, the plans are going forward, everybody’s excited, motivated, ready to go.”

The exercise held in Canton the morning of June 10 was far less dramatic, but no less important.

A simulated vehicle accident in a small parking lot just off Champion Drive caused the release of chlorine gas; as responders from Evergreen Packaging and the Town of Canton arrived at the scene, they realized they’d need to call for backup.

As those calls escalated up the chain of command, agencies from the county, the state and the federal government began arriving on the scene, culminating in the arrival of the 42nd Civil Support Team, an active-duty N.C. Guard unit that responds to chemical, biological, radiological, nuclear and explosive incidents.

Chlorine is a deadly chemical that ravages the respiratory system; it was used widely in warfare throughout the early 20th century until banned for its utterly inhumane effects, but has been used recently in Syria’s civil war. It’s considered a weapon of mass destruction, and its widespread release in Canton could kill or injure hundreds.

Several “victims” were discovered at the scene of the accident, complaining of symptoms like blurred vision, nausea and difficulty breathing.

About 15 or so members of Evergreen’s 35-person emergency response team — which responds to fires, medical emergencies and hazmat incidents at the mill — showed up, some in bulbous green suits meant to protect them from exposure.

Before they could enter the hot zone, however, a decontamination station was set up nearby on Champion Drive, which had been closed to traffic.

Sprouting up around the decontamination station was a dizzying array of firefighters, cops, medics and members of the Guard, all there to support the hazmat operations; they, in turn, were directed literally from above — a command post situated just over the hill where members of the Haywood Incident Management Team operated out of trailers beside the 42nd and the Canton Police Department.

“This gives us the opportunity to have our people exposed to a potentially hazardous material situation that could be life-threatening,” said Canton Police Chief Brian Whitner. “Being that I have a younger staff, it’s great to be to see all the components come together and we’re glad to be able to do it.”

Whitner represents the older generation of law enforcement personnel in the county; he experienced Haywood’s only recent real disaster — the floods of 2004, during which he worked constantly, slept in his car, dried his clothes on the dashboard and didn’t go home for two weeks.

Whitner’s officers represent the current generation of local law enforcement, and can now say that they’ve come as close to a real disaster as they hopefully ever will.

But training for these incidents doesn’t stop with that generation; the next generation of local law enforcement played a critical role in Operation Vigilant Catamount, from start to finish.

Courtney Wright and Chrislynn Daugherty are both criminal justice majors at Western Carolina University who will graduate in 2018; Daugherty, from Taylorsville, hopes to work homicide and Wright, from Lincolnton, wants to join her local emergency response department.

As interns in WCU’s emergency disaster management program, they not only helped check participants into the Hendersonville exercise, they helped plan it.

“We’ve been working on this since January,” Wright said. “We’ve written the scenarios and helped organize who’s going to be here.” 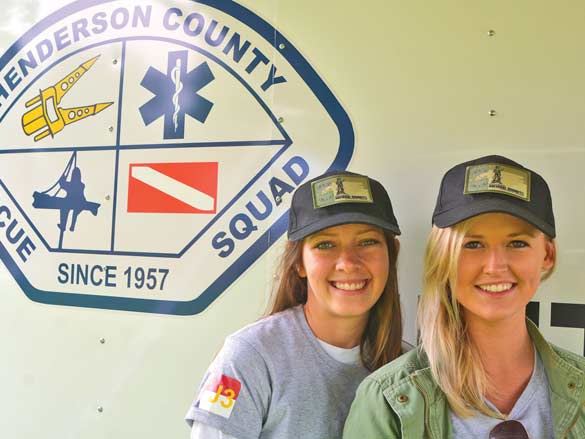 Wright, Daugherty and the rest of WCU’s interns involved in the exercise don’t constitute the extent of WCU’s participation, though — actual human cadaver parts from WCU’s forensics department were used during the search phase of the operation in Henderson County to provide a realistic training experience for cadaver dogs.

In the event of an emergency like the Henderson County or Canton exercises, officials from county and city administration would play a critical role; Canton special events coordinator Lisa Stinnett delivered a statement during the press briefing explaining the incident and then introduced Whitner, who fielded questions from the media that would have probably been asked were the event real: Should citizens be concerned? Should they evacuate? How will they know? When will they know? Is there any indication terrorism was involved?

The exercise also served as a recruiting opportunity for the N.C. Guard, which integrates with and supports local responders in situations like last year’s Charlotte riots and Hurricane Matthew.

“As recruiter, I find that a lot of times people just need a little bit more of a sense of direction, honestly,” said Staff Sgt. Nicole Kimble, a California native who joined the Army 13 years ago because she wanted to become a county sheriff.

“I was trying to get on the department, but I couldn’t because all the veterans were taking all the spots,” she laughed. “On-the-job training, college benefits, or direction — those are the three big reasons why people join. They stay for different reasons, but that’s why they join.”

While they may not stay just for the excitement of waking up before the sun to spend countless hours responding to a riot, hurricane, jet crash or chemical spill, members of the Guard can take solace in knowing that they’re not only bettering themselves in their abilities, but also enhancing the capabilities of the agencies that would be right there next to them in the proverbial trenches during an emergency.

“What it’s really about is having all levels of responders able to come together. You have your local, your county, your state, your federal — that level of exercise is a lot of organization for a lot of people,” said Dona Stewart, a Haywood County administrator who helped organize the county’s presence during the exercise and also served as the county’s point of contact.

An after-action report will soon be analyzed by participants in the exercise.

“You really can’t put a price on this,” Stewart said. “It was an excellent opportunity for us to train together so that we’re prepared.”