A blemish by any other name 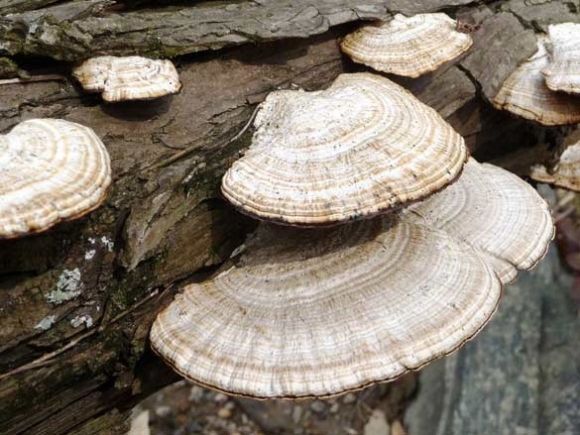 Systems of mature trees and shrubs are covered with blemishes that signal age: cankers, seams, burls, butt scars, sterile conks, and protrusions in the form of bracket fungi.

Cankers are diseases in which lesions caused by a wide range of fungi and bacteria appear on the trunk and branches. When the infected tissue dies, the lesions then crack and split open, exposing underlying tissue to further infection. Some cankers grow on a perennial basis, forming concentric rings in trunk bark with each cycle. Because these patterns resemble targets they are referred to as “target cankers.” Other cankers – like the one now killing off the butternut tree – eat through the bark exposing darkened elliptical patches of the outer cambium.

Seams are long vertical or spiral cracks on tree trunks. They vary in size from a few feet to the entire length of the trunk. These are usually caused by wind, lightening, or frost and occur in all species; however, they are observed most frequently on beech because of the smooth, thin, susceptible bark. Sometimes the seam will fold inward, forming a smoothly turned pattern like a carefully tucked blanket. At other times, it will remain opened like a knife wound.

Burls are round to semi-round or elongate swellings of the trunk. They range in size from a few inches to several feet in length. Some are of unknown origin, but most are caused by either insect or fungi infestations. Fantastically shaped burls on birch trees in the higher elevations of the mountains lend an eerie touch to that often fog-shrouded landscape.

For a while during World War II — when the European wood traditionally used to make briar pipes was not available — burls on the roots of laurel and rhododendron in boggy places in the southern Appalachians were “grubbed up” as a substitute. The center of the industry in Western North Carolina was around Hendersonville and Brevard, as well as Sparta. Another spot was the White Oak Stamp in Clay Country.  An old road near Chunky Gal Mountain is still known as “the old burl road.”

Butt scars are triangular-shaped openings at the base of trees commonly caused by fire or logging injuries. Sycamores are often inflicted with butt scars, resulting in large openings that livestock and even humans have been reputed to take refuge in during hard times or while building cabins. The largest butt scar opening I have seen is one at the base of a tree on Bryson City Island Park, which is situated in the middle of the Tuckaseigee River within the Bryson City town limits. Two people can sit inside with relative ease.

Bracket fungi grow on tree trunks year around but become especially apparent during the winter months. Some are shaped like a horse’s hoof, others like a turkey's tail. Some are as large as dinner platters, others as small as your fingernail. Also known as pore fungi, bracket fungi belong to a mushroom family (Polyporaceae) whose members grow attached to decomposing logs and tree trunks. Brackets are quite woody and hardened as compared with most soft-bodied mushrooms. Because of this woody nature they tend to last much longer than other mushrooms, providing the opportunity to observe them from year to year.

My favorites among the bracket fungi are the artist’s conks. These cracked, furrowed, knobby growths are really hard. Larger specimens have been made into stools. In Mushrooms Demystified (1986), author David Arora calculates that a large artist's conk (he found one monster weighing in at 26 pounds) “liberates 30-billion spores a day, 6 months a year – or over 5,000,000,000,000 (5-trillion!) spores annually.” Since the snowy-white pore surface on the underside of the bracket bruises easily and stains permanently brown when scratched, they have been used to leave messages in the woods or as a means for making sketches, hence the common name.

Editor’s note: This column first appeared in a 2011 edition of The Smoky Mountain News.