Trail crews get to work: Smokies crews work to improve trails and recover from storm damage 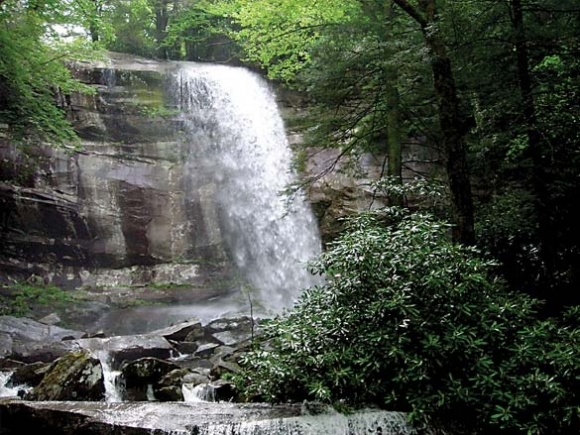 Dealing with the aftermath of two major storms while preparing for what could be another record-breaking visitor season, trail crews in the Great Smoky Mountains National Park have been keeping busy this spring.

“Three major projects are taking place in addition to the normal routine spring cleaning that our crews do, along with storm damage that we’ve had from several different wind events,” said park spokesperson Dana Soehn.

The three projects in question are rehabilitation of the popular Indian Creek Falls Trail near Bryson City, reconstruction of a washed-out foot log on the Ramsey Cascades Trail and a complete overhaul of the Rainbow Falls Trail, a two-year-long project that started May 8.

SEE ALSO: Trio of trails get a makeover

However, the park is also dealing with the aftermath of the Chimney Tops 2 Fire, which swept through the park and down into Gatlinburg last November, killing 14 people and causing $500 million worth of property damage. It also wreaked havoc on several well-loved trails, spurring long-term closures for the Chimney Tops, Bull Head, Sugarland Mountain and Rough Creek trails. The park hopes to get a section of the Chimney Tops Trail open this year, allowing visitors to hike as far as overlook to see the chimneys from a distance — the chimneys themselves were heavily burned and the soil there is dangerously unstable — but there’s no telling how long the remaining trails could be closed. They could stay closed all season, or for multiple seasons. Or, it’s possible the closures could be shorter than that.

On top of the fire damage, a severe windstorm rattled the park on Monday, May 4, mainly on the Tennessee side. Winds reached a peak of 98 miles per hour between 11 a.m. and noon, decreasing to 70 and 80 miles per hour into the evening, with sustained winds of 50 miles per hour. Trees fell and branches broke, blocking roads and trails, and spurring park facilities to close for the day.

“It was a pretty intense system,” Soehn said.

The windstorm didn’t result in any official trail closures, but some trails are simply impassible. As a result, the park’s volunteer force has become especially valuable this year. The Smokies has gotten help through the Adopt-a-Trail and Adopt-a-Backcountry-Campsite programs, and volunteers from the Backcountry Horsemen of America have also made frequent appearances.

“As a backpacker you can kind of crawl in and over (downed trees), but if you’re riding a horse that often means you’re just going to have to turn around, so they spend a lot of effort and hours on the trail helping us get them open,” Soehn said.

The park also saw some help when a crew from the Chickamauga & Chattanooga National Military Park came to lend a hand. And with Memorial Day drawing closer, the park is starting to have more seasonal help available. The last wave of seasonal hires is expected to arrive this week.

That’s important, because visitation is showing no signs of slowing down. The park saw a record 11.3 million visits last year, which was a 5.6 percent increase over the previous record of 10.7 million set in 2015.

January numbers were up 0.6 percent from 2016, and April numbers are up 0.7 percent. But February saw a whopping 29.5 percent increase from last year. So far this year, the park has recorded 2.4 million visits, a 1.1 percent increase over this time in 2016.

And that’s true even as the park is still working to let people know that the park is open for business, despite what they may have seen on the news following the November wildfire.

“There are still some markets out there that think the entire park is damaged or burned from the Chimney Tops 2 fire in November, so we have been trying to get the word out that the fire affected only about a 2 percent area of the park’s footprint,” Soehn said. “People should return and enjoy the park and keep their vacation plans.”