Voices from the trail: A.T. thru-hikers talk about trail names, motivations, and the on-trail experience 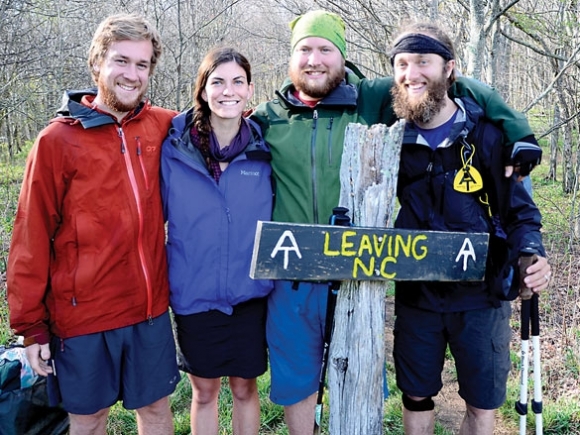 My pack was plenty heavy as I set out north on the Appalachian Trial from Carvers Gap, but with my phone on airplane mode and three days in the woods ahead of me, my steps felt light. The sun was warm and bright as a friend and I climbed those initial balds, my dog running joyful circles through the grass. The trail soon gave way to still-bare forests whose floors were alive with wildflowers, the sinking sun casting an enchanting glow over the whole scene.

Of course, the 15 mile-section of trail would have its challenges — winds so strong I couldn’t stand upright when hiking over Hump Mountain, an oncoming bank of dark clouds causing me to question what I would do should they contain lightning. A sleepless night as wind whipped the tent canvas, creating constant noise. Threat of rain that, fortunately, ended with little output except for a few passing showers. 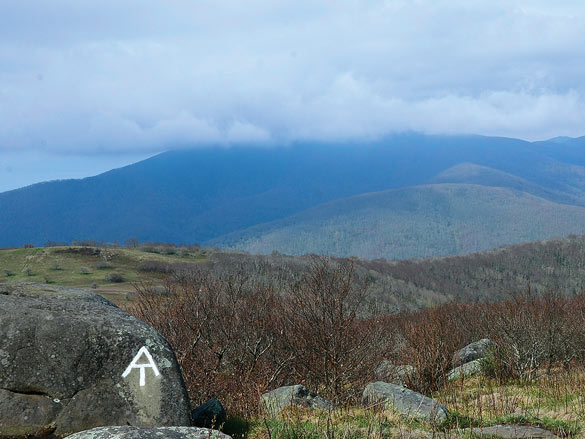 If I’d been doing all 2,190 miles, like the many thru-hikers now on the trail, the challenges would have been much heftier. I would have been in the mountains during last week’s days of heavy rain. My appetite would be enormous, and my pack too small to contain all those calories. And I’d probably be nursing aches and pains and injuries that constantly complained as I marched my way to Maine.

But for those who had already put 380 miles behind them to arrive at the Roan Mountain section, which straddles the North Carolina-Tennessee line between Boone and Johnson City, the joys outweighed the pain. They spoke of blooming flowers, on-trail camaraderie and a reinvigorated appreciation for life — a life in which the A.T. will forever loom large.

By April 27, four members of Bad Company, a loose association of 8 to 10 hikers, had reached the Doll Flats area about 3 miles from the town of Roan Mountain. They took a break from their fantasies about giant hamburgers and loaded french fries to chat about their experiences so far.

SH: I think a big thing about wanting to do the A.T. was we both love the outdoors, and living in North Carolina gave us so many opportunities to hike around here, and we just kind of fell in love with nature. But the A.T.’s so much more than that because there’s a great community and we made great friends already, and this is like our family now. There’s more than we expected. If somebody was to say, ‘What did you expect to get out of the A.T.?’ I’d say, ‘I don’t really know.’ Now I’m starting to learn what I’m starting to get out of the A.T. Just every day is new challenges and —

SH: That’s a good word for that. 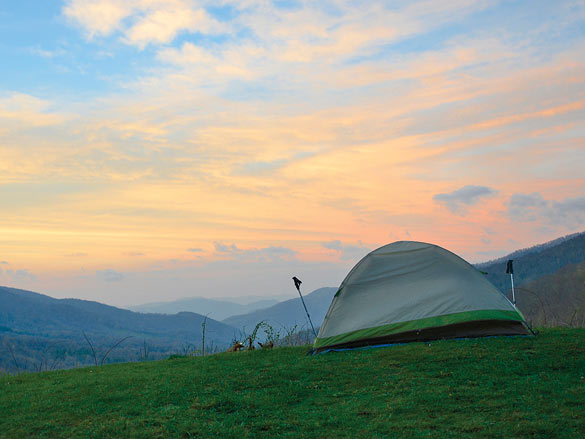 SH: The sun. Sometimes seeing the sun is one of the most amazing things.

RK: The food. Making the best dinner on the trail. Adding cream cheese to your pasta.

“I got my name just because I was so hyped up the first day. I wanted to do the trail since I was — my oldest brother told me about the A.T. when I was I think 13 or 14 and I always thought it was really cool but I never thought I could do it. I’m not the most organized person. I knew that physically I’d push through, I wouldn’t care, I’d be able to do it, but I’ve wanted to do it for so long. But then my wife, she just came home from work one day and said, ‘Hey, you want to do the A.T.?’ and without expecting me to say yes I said, ‘Absolutely,’ because I’d always wanted to and I knew with her I could figure out mentally all the preparation. Now she has a trail baby, so I had to send her home — she’s home, she’s pregnant! With twins — it’s going to be twins. I’m telling you. I ‘know’ she’s pregnant with twins. Now here I am and I have until the 10th to get off the trail, unfortunately. I gotta get a job because neither of us have jobs right now, we barely have insurance. I’m going to get 500 miles under my belt, and that’s cool. I’ll be back.”

“It was like the second day on the trail and the guy I was walking with, we randomly met and we were talking about trail names — what they might be, and nicknames we’d had in the past — and I told him how my last name was Kehr and my first initial was B and when I was in the Army it was ‘Kehr B’ and how much I hated that name, and he said, ‘You hate that name? Your name’s Kirby now.’ I’ve had to own it and go with it, but I’m out here because I’m kind of between careers, looking for inspiration. I’ve had compartment syndrome for a number of years. That’s one of the reasons I was medically retired out of the Army, and I let myself get fat. I let it rule my life and I was afraid to go walking and hiking and all that kind of stuff and I finally decided that I wasn’t going to let it rule my life anymore. I’ve had issues with it on the trail, but otherwise pretty good, and I’m quite proud of myself. And I’ve lost 25.6 pounds.”

“I’m doing the A.T. because it’s always been a dream of mine since I first heard about it, and it’s a great little sense of adventure before I feel like I need to get my foot in the career door. I am a fisheries and wildlife biologist by trade, so really just anything in that field, probably a lot of technician work to start out, hopefully somewhere on the west coast, because I want to explore that a little bit too. Hopefully I can do that for a little while and then go to grad school for fisheries and wildlife biology. So this is right up my alley, something I’ve always studied about and learned about, and now I want to live it for a while. I really want to elongate this for as long as possible, make it last, make the vacation last for as long as I can.”

“I totally love watching the forest change. When I first got out here it was nothing but leaves or mud, and now it’s flowers and depending what elevation you’re at different things are blooming. You’ll see them blooming, then you won’t see them for a while, then you’ll change elevation and you’ll see them again. That is just amazing. I’m a hiker so I knew some of that but never saw it every single day, happening every single hour. That is something that you can’t, I don’t think, express to people and they really would get it. I love this, but I don’t see me going through this again. It’s really hard on your body. I won’t stop hiking, but now I’m coming up on over 350 miles and coming up on six weeks. It’s just really, really hard on your body. And I thought it would be just muscular, so you would get stronger, but it’s tendons and ligaments and they don’t really get stronger. They just get injured and then you have to baby them, which is something I didn’t anticipate. It’s kind of tough. And it’s not just my age group that’s going through that. What it’s turned into for me is I feel like I’m doing section hikes from certain towns to certain towns, which really translates from shower to shower. Right now I feel like I’m going to Damascus, and once I get to Damascus I’ll kind of come up with a plan. My brain has it set up that I’m just doing five-to-seven-day section hikes and when I get there I’m like, ‘My next hike is —.’ I’m not thinking Katahdin. I don’t think that way. I think that would lose you.”

Completing the entire 2,190 miles of the Appalachian Trail (A.T.) in one trip is a mammoth undertaking. Each year, thousands of hikers attempt a thru-hike; only about one in four makes it all the way.

• A typical thru-hiker takes 5 to 7 months to hike the entire A.T.

• After deciding when and where to begin and then registering your thru-hike, you will need to plan your resupply points and know the camping regulations along the A.T.

• Learn the Appalachian Trail Conservancy’s expectations for hikers who want to be officially recognized as a 2,000-miler.

• In addition to these logistics, physical and mental preparations become important factors in a successful thru-hike.