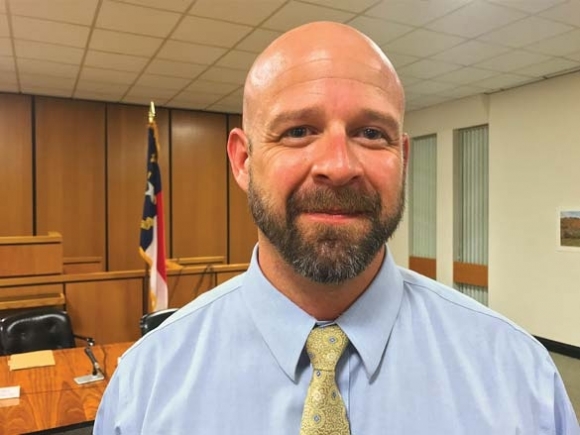 Canton’s search for a new town manager took about an hour.

Hendler-Voss surprised many by announcing his resignation March 24; he’d been Canton’s manager nearly three years to the day following the retirement of longtime manager Al Matthews at the end of 2013.

A protracted application process ended with the hiring of Hendler-Voss, who had previously been the park planning/development manager for the city of Asheville and bested 80 other candidates for the $89,000 job.

During his time in Canton, the town has experienced a much-needed resurgence in business development; with the highest municipal taxes in the county and an economy overwhelmingly dependent on a single large employer — the century-old Evergreen Paper mill — Hendler-Voss had his work cut out for him.

Since then, the progressive and thorough Hendler-Voss played a large role in attracting businesses and residents to Canton, both from other municipalities in Haywood County and from the Asheville area, which is seen as relatively overpriced and overpopulated when compared with Haywood.

Positioning Canton as a town where rent is lower, services are higher and officials are eager to talk business has resulted in the recent relocation of Western Carolina Freightliner from Asheville as well as drawn a brewery and a sandwich shop expansion from Waynesville; a soap company and bakery have also recently opened and will soon be joined by a custom furniture manufacturer, an upholstery store and a pizza joint.

Some of the relocation frenzy is due to infrastructure improvements also undertaken in recent months — despite funding snafus, the floor for the town’s new municipal pool was poured April 12, and a long-overdue streetscaping project has contributed to the aesthetic renewal of a quaint-but-rundown central business district.

Ancillary to all that but complimentary in nature is the socioeconomic and cultural evolution that began during Hendler-Voss’ tenure. Canton recently became the county’s first and only living-wage government, acknowledged the presence of alderwomen on its board for the first time and drew the decidedly non-traditional Yonder Mountain String Band to its century-old Labor Day festival.

Although the town manager works at the direction of the board, Hendler-Voss’ efficient administration of these initiatives has earned him praise from residents.

Alongside Hendler-Voss throughout Canton’s economic rebirth — or, perhaps, at times, out in front of him — has been Jason Burrell.

Immediately upon Hendler-Voss’ notice of resignation, town officials gave serious thought to the process by which a new town manager would be selected; his last day was originally slated as May 31, but has recently changed to May 13.

One option was to name an interim town manager, like the Town of Waynesville did when Mike Morgan took over for Marcy Onieal until full-time manager Rob Hites was hired a few months later; Smathers said town employees were adamant that this not occur.

Another option was to conduct a prolonged candidate search, like when Hendler-Voss was originally hired.

The most obvious choice was to simply promote Burrell — who’d been with the town even before Hendler-Voss, served as interim town manager when Matthews retired and was a finalist for Hendler-Voss’ position in 2014.

With aldermen and indeed Hendler-Voss himself citing the need to maintain the momentum that’s been building over the past year, why did it take an hour?

Noticeable tension surrounded the normally placid Canton Board of Aldermen/women even before the April 13 meeting convened; hushed chats and anxious glances were shared amongst board members as Mayor Mike Ray’s gavel came down on the first meeting since Hendler-Voss’ announcement.

After attending to old and new business — the mundane tasks that constitute the bulk of municipal government work — Ray and the board, along with Hendler-Voss, Burrell and Town Attorney William C. Morgan went into closed session per N.C. law to discuss a personnel matter.

After a time, Burrell left the meeting, milling about with citizens, town employees and reporters in the lobby.

He was called back in to the meeting, and then sent away again.

Finally, after more than 45 minutes had passed, all were called back in as the board reassembled in open session.

Smathers said that at least some of the closed session discussion was devoted to the board’s legal responsibilities in hiring a manager — should the position be advertised? Must it? Should there be public hearings and interviews and feedback sessions?

In the end, it was determined that the board had the power to act of its own accord.

That resulted in a motion — made by Smathers and seconded by Alderman Ralph Hamlett — that would appoint Burrell to the job May 13, pending successful contract negotiations.

What’s not known is what happened in closed session that led to the motion.

Last time around, the town manager job largely came down to Hendler-Voss and Burrell. Hendler-Voss won out by a vote of 3 to 1, with Smathers voting against him.

That conflict pitted Smathers — who favored Burrell — against Mayor Ray, who didn’t so much favor Hendler-Voss as he did oppose Burrell.

Since then, the board has been cooperative, but divisions are still apparent. Smathers, Hamlett, and Alderwoman Gail Mull seem to be on the same page frequently, occasionally opposing Ray and sometimes even Alderwoman Carole Edwards.

Further intrigue arises when the upcoming municipal elections are factored into the mix. It’s widely speculated that Edwards won’t run again, and there are lingering doubts about whether Ray will seek re-election as mayor — a seat many think Smathers is well-positioned to seek, should he so desire.

Whatever did or didn’t take place during that closed session — a lengthy one, considering the outcome — the motion to appoint Burrell passed unanimously.

“I think it was the right move,” said Hamlett. “Jason demonstrates a lot of acumen, and has proven himself. He’s essentially been on a job interview for the past three years. We know what he can do, and according to Seth, he performed second to none.”

Once the motion passed and the applause died down, Hendler-Voss was the first to speak.

Instead, Burrell’s been an active partner of both Hendler-Voss and the board, especially on the economic development side of things.

Burrell, 36, is a Candler-area native and Western Carolina University alum with a political science degree and master’s of public administration.

Right out of grad school, he secured a six-month internship in Asheville’s sanitation department, where he was hired by the man now director of public services for the Town of Waynesville — David Foster.

From there, Burrell jumped right to the top of Warsaw, where he served as town manager beginning in 2005, and was one of the youngest — if not the youngest — in the state until he joined Canton administration in 2009, working under both Matthews and Hendler-Voss.

Burrell, much like Hendler-Voss, comes into his new job tasked with much — but with tasks of a different sort.

“In the coming years, the economic development portion of things is going to roll on as it has, probably more focused on downtown because the consensus is that’s where the most vital opportunities are,” Burrell said. “But we’ve got so many things in the pipeline right now, it’s probably just going to be a continuation of what we’ve been doing.”

He’ll continue to serve as economic development director and will presumably aid in the decision of how, when, and if a new assistant town manager will fill his former seat and whether their duties will still include economic development, or some other skill set to add to the administration’s arsenal.

“I would very much like to continue to be involved in the economic development portion of things, because I’ve got a good handle on it and we’re making a lot of good positive progress,” he said. “I think there’s an opportunity there to look at that position becoming a planning-intensive position, I don’t know how that would flush out, but that’s an area where we could benefit from someone with that particular kind of expertise.”

Once that does or doesn’t happen, helping to shepherd the 2017-18 Fiscal Year budget through the adoption process by July 1 will be an immediate priority where Burrell’s continuity, experience and institutional knowledge will be instrumental in maintaining momentum.

“I’m very excited. I think looking back at it, it’s fallen in place exactly as it should have, or as it was supposed to,” he said. “Seth did a tremendous amount while he has been here as a result of the board, and we’re much more fortunate it playing out as it did than if I had moved in to that position three years ago.”