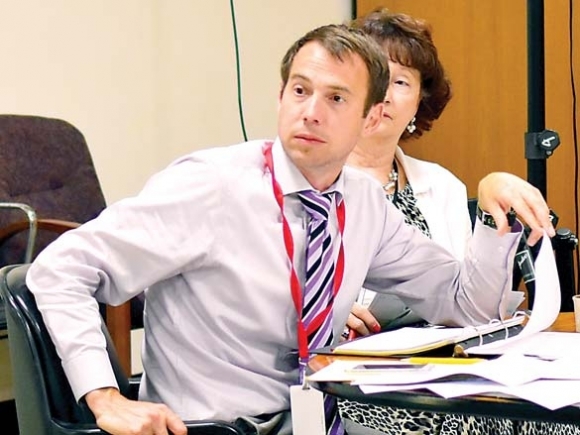 The sudden but amicable resignation of Canton Town Manager Seth Hendler-Voss came as a surprise to many, but as the shock wears off, at least one town official is hoping to maintain momentum and replace him in a timely manner.

Hendler-Voss, who served as town manager for three years, will become the Parks and Recreation Director for a “large agency in the Washington D.C. metro area,” according to a press release issued March 24. His last day as Canton’s town’s manager will be May 31.

Canton Alderman Zeb Smathers said that the board now has several options for filling Hendler-Voss’ position, and he hopes that some determination of how to do that will be made at the board’s next meeting April 13.

“I suspect we’ll have a closed session relating to personnel and figure out how to move forward,” Smathers said.

One of those options moving forward is to name an interim town manager and move on from there. The Town of Waynesville did as much when Mike Morgan took over for Marcy Onieal in early 2016. Waynesville ended up hiring full-time manager Rob Hites that August.

An additional option is to conduct a prolonged candidate search, like when Hendler-Voss was originally hired. It was nearly a two-year process to replace long-time Canton Manager Al Matthews when he retired. The town finally narrowed it down to three candidates who went through a public interview process before Hendler-Voss was hired.

Yet another option has been staring aldermen in the face for a number of years now.

Assistant Town Manager Jason Burrell has been with the town since before Hendler-Voss was hired, served as interim manager when Matthews retired and was a final candidate for Hendler-Voss’ position.

Infrastructure improvements, streetscaping upgrades, the municipal pool project, the town’s 100-plus year old Labor Day festival and a blooming downtown business corridor have led many to laud Hendler-Voss’ leadership, but with him every step of the way has been Burrell, who is also in charge of economic development for the town.

“Jason has been extremely loyal, and has been a great employee for the Town of Canton,” Smathers said. “He’s earned it, he has the experience, I know he’s interested, and I see no reason not to support Jason as town manager.”

Smathers said that he’s most concerned with maintaining the momentum the town’s acquired over the last year or two; a number of projects — including the municipal pool — are currently underway, and with budget season ending sometime after Hendler-Voss’ departure in late June, a steady hand will be needed to keep things on track.

Naming an interim or making a hire quickly would also allow Hendler-Voss, who made more than $89,000 last year, help to train the new manager, who if hired would walk into the job on June 1, just seven days before the first pubic hearing for the Fiscal Year 2017-18 budget, and just 21 days before the budget adoption vote.

Smathers also said that town employees have reached out to him about the position, and he wants to be sure they have some input as to what transpires.

“It’s my understanding that the hiring could happen under our [town board’s] discretion,” he said, meaning that it doesn’t appear the town would have to conduct a search or advertise the position.