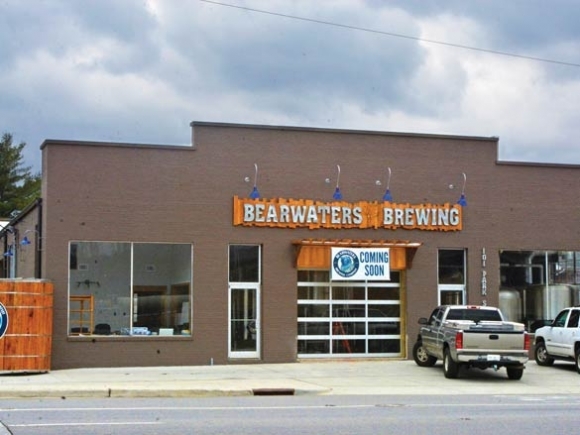 Canton is the archetype of a small southern mill village: the river running through it helps churn the gears of industry while shaded streets host quaint homes where generations of Cantonians have embraced the red, white and blue-collar culture typical of many Western North Carolina towns.

The heart of that blue-collar culture comes from Evergreen Packaging, the 108-year-old paper mill situated on the banks of the Pigeon River.

The mill’s passed through ownership changes over the years, but the town of Canton has still fared far better than most other mill towns.

When the basket containing all their eggs — that one mill, factory or shop in town that provided plenty of living-wage jobs — broke, those other towns dried up.

Canton’s major industry hasn’t yet fallen prey to globalization or rising healthcare costs and somehow survived the Great Recession, but town officials have still been relentless in their efforts to lure new businesses to town in an attempt to diversify their economy and put a few eggs in different baskets.

Canton’s cozy downtown business district is finally beginning to flourish again, attracting retail tenants who are in the midst of transforming the Main Street corridor from a ghost town to a bustling retail environment offering everything from soaps and scents to eats and treats to Lando Calrissian figurines.

Not So Old Toys and Comics at 129 Main St. is where one can find those Landos, as well as He-Man toys, comic books and a host of vintage collectibles.

“You may not believe this, but when we came here every storefront was practically empty,” said Emma Rogers, whose son Justice owns the shop.

“Canton is starting to grow on me,” she said. “I love it in this little town. I grew up in Swannanoa and Black Mountain; when Beacon Manufacturing closed, that was the end of Swannanoa. Canton reminds me of Swannanoa, but it’s good to see the businesses coming back.”

“Seven years ago, I came looking through Canton, and from then until now, it’s been a great change,” he said.

“You get a good value for the area,” he said. “There’s a lot of opportunity in here in Canton, plain and simple. Stores are moving in, and there’s buildings getting rented all up and down the strip here.”

Right across the street from Thompson, two Texas businessmen who recently happened upon this town of less than 4,200 residents did just that.

Austin Bassett and Wayne Moore were returning to their Maggie Valley home from Asheville one day last fall when Moore proposed a detour.

Moore said that the freshly paved Main Street, with accompanying streetscaping and plantings, contributed to their affinity for the place.

Spying a “for rent” sign at 137 Main Street, the two immediately knew they would soon locate their Verbena Soap Company in the vacant spot.

“We looked in this window and thought, ‘What a great location, with the built-ins and this historic building!’ so we called the gentleman whose number was on the window,” Moore said. “He said he could meet us in a couple of hours, so we went to the Southern Porch and had something to eat. He met us, and he shook our hand. And that was it. Everything was done on a handshake.”

“Every week I have at least two calls from someone interested in doing business and locating in Canton, particularly the downtown,” said Burrell, who also said that Canton’s location has a lot to do with it.

“I think Canton is obviously located well, adjacent to Asheville and also the first entry into Haywood County on I-40,” he said.

“Basically we’re landlocked with no room to expand, but we want to stay in the Asheville area,” President and General Manager of WCF Rick Gibson said in August.

Gibson said that he’d looked “up and down” the interstate for six months, before purchasing the Canton property for $1.75 million.

“I think the commercial and residential market here is very attractive, especially for someone wanting to own their own building or home,” said Burrell.

“The openness and willingness of staff to help someone interested in finding a location in Canton is a key factor,” he said. “I feel Canton staff go above and beyond to help a potential business owner by guiding them through the opportunities and making the process of finding a site, moving, renovating, and opening up as comfortable as it can be.”

Burrell and town officials indeed helped lure WCF by contributing $45,000 in economic development funds for improvements to the parcel. Haywood County also chipped in to the tune of $200,000.

Both governments anticipate a quick return on their investments. Mark Clasby, executive director of economic development in Haywood County, said that the WCF dealership — which would also offer parts and service — would eventually bring 35 “good-paying jobs” to the area.

Eventually, with those jobs will come workers who will live in those quaint homes on shaded streets and whose families will become the next generation of red, white and blue-collar Cantonians.

Alderman Zeb Smathers said such businesses have a ripple effect on the local economy as a whole because they create a “permanent need” for related services.

Art O’Neil, co-owner of BearWaters Brewing, might be one of those related services. Town officials wooed BearWaters from Waynesville when the owner of their building sold it. O‘Neil said they’d received “a couple” of matching grants from Canton related to interior improvements and signage.

“We really hadn’t thought of Canton as a possibility until we remembered a conversation Kevin [Sandefur, co-owner] had with Seth [Hendler-Voss, Canton’s town manager],” O’Neil said. “Seth is really the one who started it all. Canton immediately reached out to us, they wanted us here, and they are bending over backwards to accommodate us and our needs, because they know we’ll be somewhat of a linchpin for other businesses to come.”

Even two years ago, the thought of spending a lazy afternoon strolling around downtown Canton to visit a craft brewery, grab a sandwich, buy some comic books, pick up a dozen cookies and some scented candles was pure fancy; but as this small southern mill town with that red, white and blue-collar culture continues to mature and diversify economically, word is getting out.