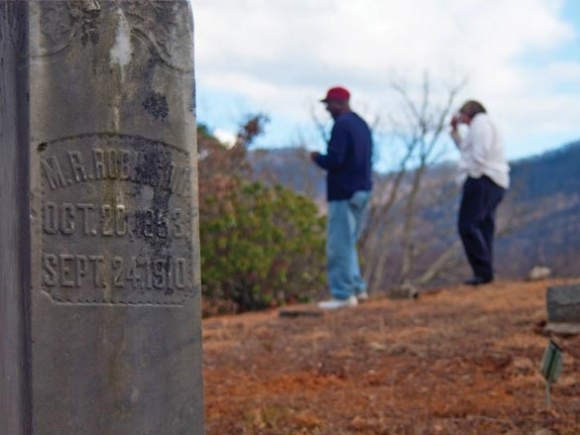 Special recognition could be coming to an overlooked quarter of Waynesville if a recently submitted grant application receives funding.

“This is an area that we haven’t done much research on yet,” said Waynesville Development Services Director Elizabeth Teague of the town’s traditionally African-American Pigeon Street community.

One of the pillars of that community is Jones Temple AME Zion Church, located at the corner of Thomas Park Drive and Pigeon Street for more than a century. Before that, it stood in Greenhill Cemetery but was sold or donated to the congregation sometime in the late 1800s, and rolled or dragged half a mile to where it sits today.

Verifiable details about the building — including rumors it may have served as a field hospital during Civil War skirmishes around Waynesville — are hard to come by, something Teague and town officials seek to remedy.

On Feb. 14, aldermen committed $4,000 in matching funds toward a $10,000 grant request from the State Historic Preservation office.

If funded, a study will be undertaken to identify other structures and locations that were and are important to Waynesville’s African-American community.

“What we’re hoping to do is bring in a historian or ethnographer who can come and do documentation on this area and some of the architectural and cultural resources of this neighborhood,” Teague said. “What we find may lead us to pursue National Register nominations of some structures.”

The survey is just the first step in the process and will give a preliminary indication as to the likelihood of National Register nomination; the area as a whole could also be considered as a historic district similar to Waynesville’s existing Spread Out Historic District along Walnut Street, and the Main Street Historic District downtown.

“If they do feel like it could qualify, then the next step would be to do an actual National Register nomination, and that requires an even better level of detail and photography and documentation,” she said.

From there, the nomination moves to a state committee, and then a federal committee, which makes the final decision.

Teague said that although property owners can realize a tax benefit if their homes become landmarks, the bigger picture is the benefit to the community as a whole.

“Waynesville, in particular, stays on people’s radar throughout the country because of its historic significance. Historic preservation as a tourism tool is very important,” she said. “This has a tourism benefit, and an economic development benefit to the town as well.”

But none of that can begin until the grant awards are announced in May.

“It’s a very competitive process, so we want to put together the best application possible,” Teague said. “Their interest was high, but of course these grants compete statewide.”

In the event Waynesville doesn’t receive the grant, it’s possible the study will be funded anyway; Teague said the town’s application to conduct a similar study of the Greenhill Cemetery was rejected in 2015 but the town ponied up the full amount —  $5,700 — to complete it.

The study resulted in a nomination that passed the state committee and awaits the national committee, which should meet to review it sometime in March.

And even if the $10,000 Pigeon Street survey doesn’t ultimately result in any National Register listings, the information gained during the process will be more than worth the cost.

Primary sources of information on the segregation-era history of African-Americans in Waynesville are dwindling rapidly, and formal resources are hard to come by.

Capturing the history of the area in a systematic, academic manner would greatly bolster existing resources and serve as the basis for interpretive signage or public art that would most likely be placed in a proposed park just yards from Jones Temple on Cavalry Street.

“I appreciate greatly the Town of Waynesville’s commitment to historic preservation,” Teague said. “Our Mayor [Gavin Brown] said it best at the meeting when he said ‘I think it’s important that we include all of Waynesville.’ We don’t want to overlook this area, because it’s an important part of Waynesville.”