Down to bare rock: Smokies’ Chimney Tops could be closed for years following fire 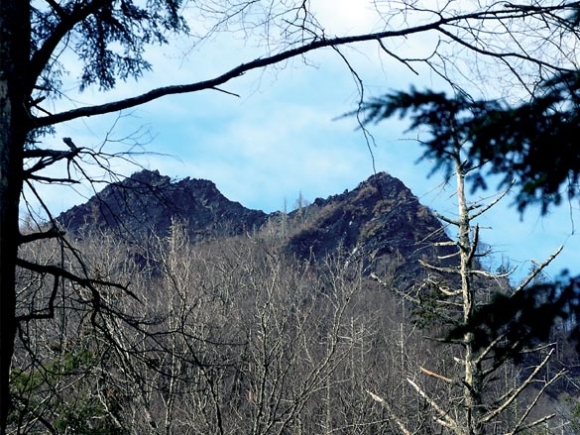 When starting the hike, it’s not immediately obvious why the Chimney Tops Trail should be appointed for long-term closure. The brook is babbling, the sun is shining and the trees are towering just as one would expect of a trail in the Great Smoky Mountains National Park, and the results of a recent trail rehabilitation effort make for exceedingly pleasant walking.

But as the trail nears its terminus at the twin peaks of the Chimney Tops, the reason becomes abundantly clear. Its harbingers are announced with a jumble of burned branches here, an area of blackened ground there, and the sudden realization that, even on a brisk winter day when it’s hard to smell much at all, there’s a faint odor of charcoal in the air.

“It all burned so intensely,” said Dana Soehn, the park’s spokesperson and hike leader for the band of media representatives given one-time access to the closed trail. “Those straight-line gale-force winds that we had blew these trees over, and when these trees come over, they take the trail and soil with them, so the trail as we know it is no longer in place.”

As the trail turns to face the twin summits of the Chimney Tops, the truth of her words is apparent. The rocky outcrops were once covered with the texture of rhododendrons and sand myrtle, the occasional tree threading its roots through the thin soil and providing a hospitable resting place for hikers wanting to stop short of a full-on scramble up the rocks. 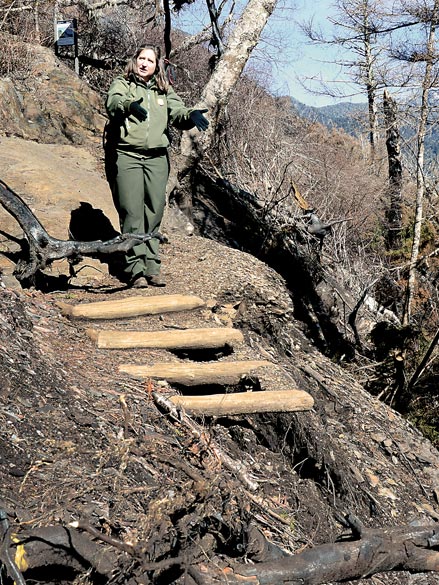 Not anymore. The Chimneys are now bare rock, stripped of trees and shrubs and flowers, cliffs falling steeply on either side. The trunks of upheaved trees fall across the spine of rock, creating an obstacle course in place of a trail, with steep cliffs on either side always warning against a misstep. There’s little to no soil to be found — just rock, and char. The remains of locust wood steps can still be seen, swirled in burned piles or hanging onto the rock face with the ground they once clung to now somewhere at the bottom of the mountain.

The trail used to meander. It used to pass through little pockets of shrubs and swing by shady trees. Now, there is no trail. And the soil that’s still around is badly damaged, vulnerable to erosion and sloughing off down the mountainside.

It could be years before the full trail is open again, Soehn said, and it will be summer or fall before hiking is allowed even on the lower portion of the Chimney Tops Trail.

As to how long it will take for the area to return to its pre-fire condition? It could be 80 years, Soehn said.

“We know that we need to let the rest of the trail set and give it time to heal before we plan any kind of future work on it, because it wouldn’t be sustainable for us to build something on unstable slopes,” Soehn said. “We’ll know much more in 2018.”

The Chimney Tops 2 fire started as a small, slowly growing ground fire on Nov. 23, 2016, and had reached about 50 acres by Sunday morning, Nov. 27. But then the winds came, wafting the blaze to 500 acres by Monday as winds continued to gain strength overnight. As darkness fell, wind speeds as high as 87 miles per hour propelled the flames toward Gatlinburg with unprecedented speed, resulting in a fire such that many firefighters with decades of experience had never before seen in the eastern U.S. Before rains quelled the flames, the fire had burned 17,904 acres, killed 14 people and caused $500 million in property damage. A pair of Tennessee teenagers were arrested and charged for arson, but no information about the case is being released publicly, with District Attorney General James Dunn enacting a gag order shortly after the arrests.

The end of the Chimney Tops Trail is where it all started.

It’s only the last 200 yards or so of the trail that’s really damaged, though signs of the tumultuous fire season do appear earlier. About three-quarters of the way up, what looks to be a muddy but steep path splits off from the main trail, with a wooden sign that reads “This is not a trail” placed over it.

It’s the remains of a hand line, a line of dirt that firefighters dug around the fire perimeter to keep it from escaping. Fire lines don’t have to be very wide to contain a ground fire that spreads along the forest floor, but they do have to cut down to the bare mineral soil, with all potentially flammable organic matter dug away. When the fire is over, lines that have not been rehabilitated can open the door to erosion.

In the case of the Chimney Tops 2 Fire, the fire lines had to be installed quite a ways from the actual start. Even though the fire was only 1.5 acres when first discovered, the fire lines outlined a 410-acre perimeter. But that’s for good reason, Soehn said. Slopes on the Chimney Tops measure about 80 degrees — it would be near impossible for firefighters to safely work on those rugged slopes, and any materials they moved to create a fire line would just shift downhill, making the line ineffective.

“What you have to do is tie it into an area where it can actually stop that movement of ground fire,” she said. “That’s what the 410 (acre) containment lines were.”

Further up, the first glimpse of the post-fire Chimneys comes in view, partially veiled by the branches of a spruce tree. It’s a stark sight, just bare rock. Across the valley looms Mt. LeConte, burn scars acutely visible on its slopes as well.

Later this year, the trail will likely be open up to the point of this view. The park plans to expand the existing lookout to accommodate the traffic the trail is likely to attract and to do some “strategic trimming” of trees to allow a view of the Chimneys. It’s an important trail for many people, Soehn said, and the park is trying to get it open as soon as possible.

The Chimney Tops is one of the hardest-hit areas of the 11,410 park acres affected by the fire, and of the 17,904 acres burned overall. Within the park, 65 percent of the area inside the burned perimeter was either unburned or lightly burned, meaning that within three to five years, park visitors won’t really be able to tell that it was ever on fire. Another 25 percent of the burned area was moderately burned, meaning that the shrubs and some of the larger trees were damaged, but the soil is still intact and holds seeds that will regenerate with time. 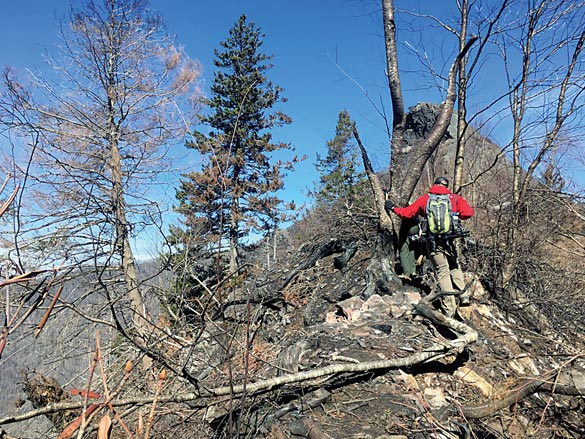 However, 10 percent of the burned area within the park burned with a high intensity, meaning that soils, grasses, shrubs and even canopy trees were damaged or destroyed.

The end of the Chimney Tops Trail is part of that 10 percent. The vegetation is gone, the soil is unstable, and trees are upended and blackened.

A similar situation exists on four other park trails. The Bull Head Trail, Sugarland Mountain Trail and Rough Creek Trail are all expected to see long-term closures as park staff watch how the slopes and soils stabilize over time. Those four trails are a subset of the 16 that were originally closed in connection with the fire, accounting for about 31 trail miles of the 848 in the park.

The Chimney Tops Trail has been a subject of particular concern, however, and not just because it’s where the devastating fire originated. The trail was extensively rehabilitated during a three-year project 2012-2014, a $750,000 endeavor funded by private donations to the Smokies Trails Forever Program, which is part of Friends of the Smokies. Before the rehabilitation, the trail was heavily eroded and braided, as many as 20 feet wide in places. The steep grades were all mud, creating opportunity for accidents as well as sedimentation in nearby Walker Prong.

Donors and workers from across the country joined forces to transform the trail into a sustainable, natural-looking route marked by locust steps filled with hand-chiseled rock and culverts made of gigantic rocks that workers hauled from areas near the trail to fit seamlessly into the landscape.

It’s a “thoughtfully done” project displaying “amazing workmanship,” Soehn said, and “We want to honor that and do everything to get this trail back into shape.”

Donations poured to the park after the fire, with the $500,000 fundraised following the event sufficient to do needed work on the Chimney Tops Trail. The fire damage won’t derail the timeline of the next Trails Forever Project, which was announced just days before the Chimney Tops 2 fire exploded as a two-year rehabilitation of the Rainbow Falls Trail.

The fire is also expected to have minimal impact on the park’s fisheries and wildlife, thanks mainly to the season in which it occurred. The fire struck when the spawning and reproduction cycle for fish was well over and when the vegetation that wildlife depend on for food was already dormant. So, while individuals might have perished in the blaze, the fire isn’t expected to have much of an impact on these species at a population level.

“What could be more impactful is the drought we were in throughout most of last year,” Soehn said of the fisheries.

The 2016 fire season will have lasting impacts, and it will become a long-term part of the park’s larger story. But the Smokies as a whole is far from resting in total devastation. As a percentage of the total park area, the fire area is small, and as the years pass the vegetation will recover — even on the Chimney Tops, though return to its pre-fire conditions will be slow.

“It has a story to tell, both about the tragedies of this fire and the recovery we’re going through as a community and the park together,” Soehn said. “It’s important to us to allow the public to yet again experience this and not let this devastation take the trail away from us.”

• The Chimney Tops 2 Fire started on Nov. 23 and swelled in size overnight Nov. 28 due to dry conditions and hurricane-speed winds.

• Of the 17,904 acres that burned, 11,410 were within the Great Smoky Mountains National Park, representing about 2 percent of the total park area.

• After the fires, 31 miles on 16 trails were closed. Currently, four trails — including the Chimney Tops Trail and the Road Prong Trail, which joins it — are under long-term closure. The other closed trails are Bull Head Trail, Sugarland Mountain Trail and Rough Creek trail.

• A portion of the Chimney Tops Trail is expected to reopen this summer or fall, but the summit could be closed for years.