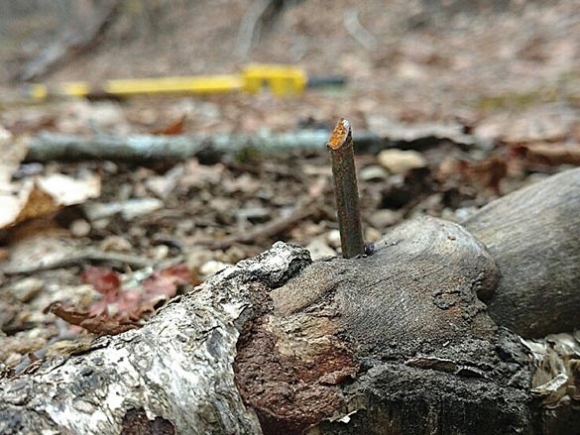 In a bizarre discovery, over 50 intentionally placed spikes have been identified and removed from the popular trail system at Pinnacle Park in Sylva.

And with less than a month until the “Assault on Black Rock” seven-mile trail race at the park (March 18), race director Brian Barwatt is more than on edge. This year’s race will serve as a fundraiser for Neighbors in Need, a Sylva nonprofit.

“My concern [is] for other people up there,” he said. “I’d be lying if I said I wasn’t worried about the trail race either.”

On Feb. 11, a group of local runners were traversing the course in preparation for the race. Coming down a remote section of the East Fork Trail, one of the runners stepped on a nail, injuring himself. Upon reaching the parking lot at the trailhead, the runner notified Barwatt of the incident, stating he found two spikes where he’d gotten hurt. The runner went to the hospital after to receive a tetanus shot.

Barwatt then called Sylva Police Chief Davis Woodard. This past Saturday, they headed up to where the incident happened, only to find eight more spikes within the vicinity.

“Honestly, [I] thought it was just going to be that one area,” Barwatt said. “But, then I started heading down the East Fork Trail back to the parking lot and I didn’t find any, and [Woodard] headed out the East Fork Trail up to the West Fork Trail and then out toward Pinnacle and he found about 30 more.”

Since then, the Town of Sylva called an emergency meeting, where local officials and volunteers decided to scour the trail system with leaf blowers and metal detectors following close behind. In that search, 10 more nails were located.

“[They were] pretty much anywhere there were roots crossing the trail,” Barwatt said. “They basically took these 16 penny nails and hammered them in an inch or so, and cut off the top with either a hacksaw or a bolt cutter at a sharp angle, [leaving] maybe like anywhere between half an inch and two inches sticking up.”

A $1,000 reward has been offered for information about the incident. Call the Sylva Police Department at 828.586.2916. As of press time, there were no leads on suspects, but Barwatt thinks whoever placed the spikes might be someone local. He noted that nails were found all the way to a park boundary gate at the end of the Parris Branch Road, a little known access point into the heart of the mountain, within a short hike to the summit of Black Rock.

“They kind [of walked the contour] of the mountain, and that’s why I think it’s somebody local who did it,” Barwatt said. “Not many people know that area and how to get there.”