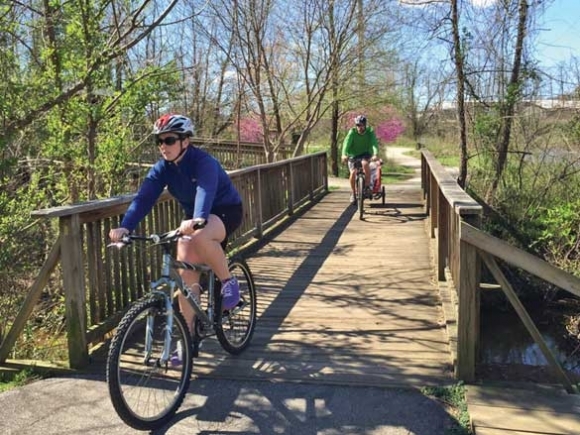 A proposed comprehensive plan to improve Franklin’s pedestrian and bicycle infrastructure includes more than 20 recommended projects to fix the town’s sidewalks, increase connections to the greenway and make downtown more navigable for visitors and residents alike.

JM Teague Engineering presented the final draft of Franklin’s Bike Walk Plan —funded by a $36,000 North Carolina Department of Transportation grant — to the board of aldermen last week. The entire 174-page document carries a $10 million price tag, but JM Teague Planner Kristy Carter said the town could begin work on the simple projects now while looking for funding opportunities for some of the larger scale projects included in the plan.

“We give you this huge long range plan with a huge price tag so we also like to give our communities 10 easy things to get done without a lot of money,” Carter said.

The projects all came out of public input sessions in the community and were then ranked by priority based on criteria established by the steering committee. Projects receiving high priority are ones that would improve safety, increase connectivity in town and fill in infrastructure gaps.

“It’s not just about how do we get good sidewalks on the ground,” Carter said. “It’s really about how you build the community.”

The top-ranked project is the Southwest Loop Trail — a multi-use path for bicyclists and pedestrians separate from vehicle traffic. The loop would run from Memorial Park to Old Murphy Road over to Westgate Plaza and back to Memorial Park by way of Georgia Road.

Even though it’s top ranked, the 3.7-mile project would cost an estimated $4 million and would require a lot of construction and right-of-way acquisition.

A project to add sidewalk infrastructure to the intersection of Porter and Palmer streets ranked No. 2 on the list. The busy and confusing intersection could benefit from pedestrian signals and crosswalks and would only cost $125,000 to complete.

An extension to the Highlands Road sidewalks is the third project. For $550,000, a mile-long sidewalk extension could be made on the west side of the road to allow pedestrians to access many businesses and a grocery store. Besides the cost, the only other challenge is limited space for a buffer between the sidewalk and traffic.

The fourth-ranked project would extend the sidewalk 750 feet on Highlands Road from Crane Circle to 1st Avenue on the east side of the road to connect a isolated stretch of road. The cost would be $90,000.

Extending the sidewalk along both sides of Georgia Road from Golfview Drive to Belden Circle also made the top five list. It would connect the U.S. 23-441 southern corridor with downtown, adding safe pedestrian paths along the wide road. The project would cost $540,000 would also connect the Macon County Fairgrounds and Recreation Park, the Smoky Mountain Center for the Performing Arts, Franklin Chamber of Commerce, Franklin High School and all the businesses in between.

If the town does nothing else on the list, Carter suggested that the town establish a long-range sidewalk capital improvement plan to begin chipping away at replacing crumbling infrastructure and adding new sidewalks around town.

The board said it would need time to digest the proposed plan and would take a vote on it at its March meeting. To see the complete plan, visit www.franklinnc.com/projects-franklin-nc.html.