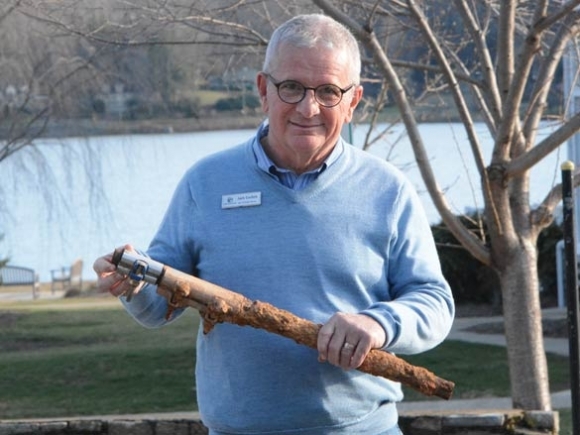 Think your honey-do list is long? Wait until you meet Jack Carlisle.

It will take two decades and upwards of $10 million to systematically fix the maze of crumbling, century-old water-and-sewer pipes running below Lake Junaluska’s neighborhoods. It’s not exactly the job he signed on for.

“I thought my tenure here would be short lived,” said Carlisle, the public works director for Lake Junaluska Assembly.

Lake Junaluska, a community of 765 homes anchored by a sprawling retreat center, was poised to merge with the town of Waynesville when Carlisle came on board in fall of 2014.

“I thought I would be walking the community through the process of turning the reins over,” Carlisle said.

The merger was but a mirage, however, and is now off the table. Carlisle became the owner of an 800-pound gorilla — namely the enormous list of infrastructure repairs — but is taking it in stride.

“Operationally and strategically, we made a sharp right turn and got on with business,” Carlisle said. “We dropped the hammer and started going through the list.”

At a pace of $500,000 a year, Lake Junaluska is repaving streets, replacing hydrants and fixing leaky, corroded water-and-sewer lines.

“And by fix, I mean replace and refurbish — not Bandaid,” Carlisle said.

It’s an important distinction. For decades, Lake Junaluska ignored its water-and-sewer lines, tackling only the worst of leaks with a patch-it-up approach. Compounding the problem, water-and-sewer rates were artificially low, with nothing being set aside to tackle the inevitable backlog of repairs that would result down the road.

When it finally came time to the pay the piper, the scope of critical infrastructure repairs seemed so enormous —$10 million, according to two independent engineer analyses — that merging with the town of Waynesville seemed like an attractive solution.

But after four years of trying for a merger, Lake Junaluska couldn’t keep waiting for a savior. It had to fix its own infrastructure, and that meant paying up to get it done.

Water-and-sewer fees doubled, and homeowner fees went up by 30 percent.

Despite the initial sticker shock, the community gets it, said Jack Ewing, the executive director of Lake Junaluska. It’s a message he’s tried to convey since he came on board seven years ago.

“One of the things I said was ‘We can’t operate on a shoe string anymore,’” Ewing said.

A couple members of the Junaluska Community Council have raised issues lately over what the conference center should absorb versus what residents should foot the bill for, and have taken Carlisle to task to justify and account for capital improvement expenditures, according to community council minutes.

But the conference and retreat center has been saddled with the same fee increases that residents have, even charging itself the property owner’s fee based on the property’s dollar value.

“One of the things we believe is people who benefit from the services they receive should contribute their fair share,” Ewing said. “Even though the costs have gone up significantly we continued to thrive.”

Ewing has earned a reputation as a turnaround man since he came on board seven years ago.

Historically, Lake Junaluska was propped up by a $1 million annual subsidy from the Southeastern Jurisdiction of the United Methodist Church. Nonetheless, the conference center was still losing money, losing guests and suffering from shabby, tired facilities when Ewing came on board.

But for the past five years, the conference center has not only launched a major campus improvement master plan — from Terrace Hotel renovations to dining hall and auditorium remodeling — but has still ended every year in the black, and done so without the subsidy. To boot, the conference center has given out $450,000 to employees through profit sharing over the past five years.

“We have embraced a model of sustainability in the absence of annexation,” said Ewing.

Thanks to the increased fees, Carlisle is now tackling $500,000 a year in infrastructure repairs.

“We are a pay as you go system,” Ewing said. “We’ll just keep chipping away at it as the funds are available.”

With such a long list, deciding what to tackle was daunting. An engineering assessment of Lake Junaluska’s infrastructure conducted as part of merger planning has served as a template to guide the work, backed up by public works staff.

“I verified with our operational folks to say ‘If you had the check book in your hand today, which would you do?’” Carlisle said. “They know what’s under the ground.”

Repairs have been working. Leaky pipes were resulting in huge water losses. Lake Junaluska buys water wholesale from the town of Waynesville and resells it to its own residents, but 35 percent of the water it was buying was lost on the front end due to leaks and not being recouped through customer billing.

“Those are dollars flowing down the creek,” Carlisle said.

Lake Junaluska homeowners on average are paying more and getting fewer services than they would as part of Waynesville.

Lake residents not only pay higher water-and-sewer rates, they pay for their own street and gutter maintenance, security force and trash pick-up. They also pay separately for fire department protection. That would all be included in their property taxes if they were had merged into Waynesville’s town limits, and they would see lower water and sewer rates as well.

Waynesville offers economy of scale, compared to the higher per capita overhead of a small community going it alone.

But Tim Phelan, an elected representative on the Junaluska Community Council who was against the merger, said the current strategy is working and proves a merger wasn’t necessary.

“As residents, we were hopeful our rate increases would provide adequate capital for them to dig in and make repairs. It is certainly doing the job,” Phelan said.

While Community Council Chair Jimmy Pennell had supported the merger, he agrees the new path is working.

“Who’s to say that one would have been better than the other,” Pennell said. “We said ‘Let’s go back to the drawing board.’ We aren’t going to sit here and do nothing.

We are just taking a bite at a time.”