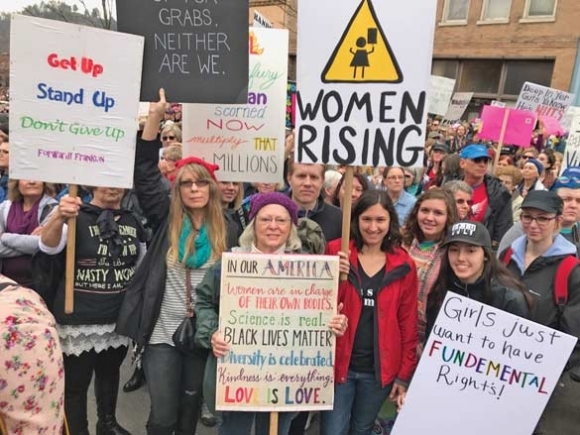 “Care more, judge less,” “Love trumps hate” and “Rise up” were just a few of the battle cries heard in downtown Asheville last Saturday as an estimated 10,000 people marched to protect women’s rights.

It was a cold and gloomy morning but the enthusiasm was high as Pack Square began to fill up with men, women and children of all ages and backgrounds donning pink hats and protests signs.

As she took a look around at the crowd, Asheville Mayor Esther Manheimer said she was overwhelmed by the turnout.

“This is the medicine we need,” she said as the crowded roared around her.

Despite the peaceful nature of the march, the movement has received some backlash from men and women who questioned what exactly these marchers were protesting.

“People have asked me ‘why are the women marching?’ and I tell them this past year is the first year in my lifetime and probably in all of your lifetimes that women didn’t take a step forward in their march toward equality,” Manheimer said. “We need to remind the people of this already great nation why we’re marching.”

After speaking to a number of attendees, most seemed to have their own personal reasons for being there — though the one connecting factor seemed to be President Donald Trump’s attitude toward women and other minority groups that has convinced them this new administration does not support equality for all.

“Issues that more heavily impact women are too often used by politicians to generate anger and fear. That was never more prominent than in this election,” she said. “Coupled with Trump's remarks and actions during the debates, it was as if these very important issues were either a joke or of no consequence to him.”

Waynesville artist Margaret Roberts said she marched for her two gay children, her deaf daughter, her three nieces and herself.

“It terrifies me that our president says one thing one day and denies it the next. I'm terrified of conspiracy theories. I'm sad that if someone is different from the norm that they should be marginalized, ridiculed, hated and abandoned,” she said. “I marched because I love the principles upon which our country was founded and not what a few want for themselves. I want liberty, justice and inclusiveness for everyone and that's why I marched with like-minded friends,” Roberts said.

Teri Domagalski, a professor at Western Carolina University, said she chose to march so that she can look herself in the mirror each morning knowing that she acted on her principles and values.

“The march in Asheville showed me the power of collaborative leadership, the resonance of a message framed by hope, and the wonder of respectful acceptance of disparate issues among the marchers,” she said.

Lindsey Solomon, executive director of the Haywood County Arts Council, said she chose to march for her LGBTQ friends and family who are afraid of having their rights further eroded. She also doesn’t want to lose her health insurance if the administration repeals the Affordable Care Act.

“There's more to my list, but that's what was so beautiful about the Women's March — we all had personal causes on our minds, but the ultimate message was love and acceptance. It was a morning of peace and community that gave me hope.”

Tuscola High School student Sophia Masciarelli, 16, said she marched for freedom, peace and change. She marched to stand up for those who have been affected by hate. She said it’s to the point where she can barely watch the news anymore without getting a feeling of dread in her gut.

“And as a young person, as a young woman, this is one of the most discouraging and off-putting feelings I can think of. It hurts me, down to my core, listening to the kinds of ideas and policies these ‘politicians’ are proposing,” she said.

But last weekend she experienced something different — she saw women and men, of every age and ethnicity, coming out in solidarity to support each other.

“Before the march I felt alone, forced into silence by the naysayers around me, but now I know that there is hope. Hope for a brighter future where we all work together to fight the unfair and unjust policy that is handed down unto us.”

Speakers addressing the Asheville crowd encouraged them to continue to be vigilant about protecting their rights by getting involved in local organizations, running for office or supporting someone else running for office.

“I am a product of the blood, sweat, and tears of our foremothers and fore-grandmothers who made every aspect of my life a possibility,” Mayor Manheimer said. “Because of them, I can own property, I can vote, I went to law school and practice law and I can stand here as your mayor.”

Attendance was much larger than expected, but the march remained peaceful with law enforcement officers on standby throughout the route. The Asheville march, which was one of more than 600 marches held around the world on Jan. 21, raised more than $17,000 for Planned Parenthood South Atlantic.