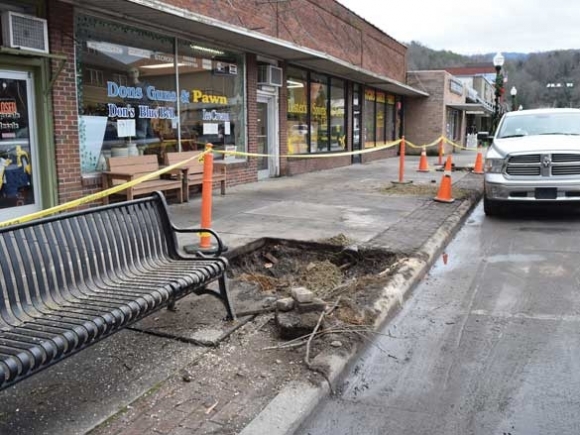 Many Bryson City business owners were caught off guard last week when they noticed massive holes all along Everett Street where large shade trees used to be planted.

There are now 22 holes on Everett Street to be exact, leaving unattractive and muddy voids all along downtown’s main thoroughfare.

“They were all removed so fast — I just wish there was better communication about what was going on,” she said.

Bryson City Manager Chad Simons said the tree removal project has been in the works for many months, but the board of aldermen made the decision to take out the trees in January when tourist numbers are low.

“I don’t know exactly when the trees were planted on Everett but they were destroying our sidewalks,” Simons said. “The town had a lot of liability claims from people falling because the tree roots were pushing up the sidewalks.”

Instead of continuing to pour money into patching the sidewalks, the town planning board made a proposal to remove the large trees from the downtown sidewalks and plant new trees in April that will be more conducive to downtown.

Planning Board member Catherine Gantt said the trees that were removed were larger trees like maples and magnolias. And after a lot of research and recommendations from the North Carolina Department of Agriculture, the planning board is looking to replace those 22 trees with up to 15 Japanese zelkovas, which are smaller trees with a less invasive root structure.

“The variety of magnolias and maples were pretty but the key is to find a tree with a root system that has a habit of growing down instead of out,” Gantt said.

According to the National Arbor Day Foundation, zelkovas are ideal for street landscaping with an appealing vase-shape form and a rounded crown. The tree is also more tolerant of drought and air pollution.

Gantt said Highlands and Waynesville also have zelkova trees planted along their downtown streets. While everyone seems happy with the plan to replant with zelkovas, Gantt said another option is to not replace all the trees to create better visibility downtown.

“We may not need that many — it’s kind of nice right now without the trees because you can see the view,” she said.

Angel said she hopes the trees are replanted soon because they add aesthetic value to downtown.

“I think they need to be replanted — the connection and draw here is our connection with nature and that’s why I was so disturbed to see them gone,” she said. “Many people donated those trees and they had plaques so there is a personal connection to those trees.”

Many of the trees removed from Everett were planted in memorial or to honor someone in the community. Gantt said those people have been contacted and plans have been worked out to replant those trees somewhere else of their choosing. For the trees that aren’t salvageable, they could be cut up and given away for firewood.

The planning board will be walking downtown Bryson City this week with Simons to mark where the new trees will be planted. The holes in the sidewalks will be repaired and rubber gates and new plaques will go up around the new trees when they are planted.