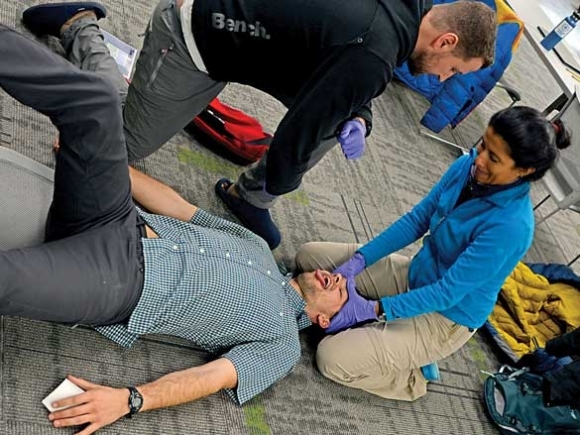 Landmark Learning, a nationally accredited school offering a variety of courses in wilderness medicine, started using the building in May, though there’s still heavy equipment in view as fine-tuning continues. The 8,000-square-foot building contains a 2,400-square-foot classroom, a commercial kitchen, and a student lounge. Up an even steeper hill than the one that leads to the main building is a pair of dorm-style cabins and a terraced camping area, which together can accommodate 36 people.

“It’s a passion we have, and it’s not only a passion for being outdoors and being active, but it’s a passion for the type of people we keep running into,” said Mairi Padgett, who started Landmark Learning with her husband Justin Padgett in 1996.

It’s a passion that’s been producing results. When Mairi and Justin first launched the business, they were the only staff members and leveraged their apartment to double as their office, recruiting a first-year roll of 46 students. But they didn’t stay that small for that long.

In 2000 they purchased the 30-acre property on Cane Creek Road and in 2001 built their first classroom, which is located next door to a refurbished 1927 cabin that serves as Landmark’s main office. The campus holds a tent pad that accommodates 13 tents and a bunkhouse holding 16 people.

It took Landmark only four years to outgrow the space. To meet demand, the school began renting facilities throughout Western North Carolina to run their courses. But that didn’t seem like the ideal long-term plan.

“Very quickly, we realized that it’s just easier for us to run everything here,” Padgett said.

The staff at Landmark is intimately familiar with the lay of the land along Cane Creek. Running classes there, it’s easier to assess risk and to devise high-quality scenario drills that are appropriate for each specific group.

So, four years ago Landmark bought a 10-acre parcel abutting the initial piece of land. And two years ago, work started on the new building. They got their certificate of occupancy from the county on May 5, 2016, and ran their first course there three days later at full capacity.

It’s easy to see that Padgett is proud of the new addition to campus. The building itself is a bit industrial looking, gray and made of stainless steel and concrete. But it’s 100 percent recyclable, fireproof and made with labor and materials purchased from local companies.

“The vast majority of money that was used to build this went directly back into our community,” she said.

That’s a substantial sum — Padgett said she expects Landmark to max out the $1.2 million loan it procured for the project by the time all the finishing touches are done.

The top floor has a large commercial kitchen — complete with individual food cubbies for each student — a lounge area, and what will soon be Landmark’s new administrative offices. The area is full of natural sunlight and a significant upgrade from the refurbished cabin where staff currently work.

The classroom is located on the bottom floor of the new building. It’s an open area with closets to store equipment for each class, a horseshoe of desks and chairs, and a small breakout room at the back that Padgett said will eventually become a scenario room made to look like an apartment. Outside, there’s a rare spot of flat ground for outdoors scenarios and a faux trail system — it dead-ends after a short run — where students can simulate backwoods rescues.

It wouldn’t be correct to refer to the two floors as upstairs and downstairs, however, because there are no indoor stairs. That’s on purpose.

“The more we can get folks to move, the better we can get them to sit still in class,” Padgett said.

Up the hill from the new classroom — the hill in question is so steep that only staff members are allowed to drive up it — are the dorms and tent area. There are two dorm buildings, each containing eight beds and four showers, with central heat and air. That’s an improvement over the original dorms, which have only two showers to serve anyone staying in one of the 16 beds or 13 tent spaces.

And the view isn’t too shabby. From the dorms students can look across to the opposite slope, which is fully wooded and destined to remain that way due to a conservation easement.

“It really gives our students the feeling that they’re in the wild, even though we’re 10 minutes from Super Walmart,” Padgett said.

The old campus has its charm too, with many students expressing some strong nostalgia for its backwoods feel. But the christening of the new campus doesn’t mean the old one will disappear — with the new building open, Landmark can now run two different classes at once, a great benefit in light of ever-growing demand. When only one of the campuses is being used, Landmark will also have the option of renting out the second one.

From the initial roll of 46 students that the Padgetts taught in 1996, Landmark’s student count has burgeoned over the years to numbers topping 2,700 in 2016.

“We have a lot of returning students,” Padgett said. “When we run a Wilderness First Responder recert, we have 30 students 30 days out with a huge waiting list. We do get a lot of people who say, ‘That was the best experience I’ve ever had. Those were the best instructors I’ve ever had and I want to return there.’”

It’s hard to pinpoint exactly why Landmark has seen so much growth throughout its relatively short history. Padgett believes that the affinity that she and Justin have for the kinds of people who tend to flock to outdoors courses plays a role. She also believes that the type of environment they try to build is important — one that fosters teamwork and collaboration to build enthusiasm among staff and students.

“I think we had an initial passion to be with the people that were doing the things that we did and creating a way for them to access these trainings that until then were not very accessible in the Southeast,” Padgett said. “So we saw a niche we could fill.”

Landmark doesn’t offer its own certifications — they’re not into “reinventing the wheel,” Padgett said. Rather, the school seeks out the best curricula and the best instructors to bring wilderness education to people in the Southeast.

Landmark’s growth is certainly to its credit, but it’s not the only outdoor education school seeing gains over the last couple decades. The National Outdoor Leadership School, the nation’s largest provider of education in wilderness medicine, has seen about the same level of growth as Landmark has — a consistent 10 percent per year, Padgett said.

“I definitely think the interest is there and the interest is growing,” Padgett said. “I think that more and more folks reach a certain age and maybe they’re dissatisfied with their corporate life and they’re looking for other alternatives.”

Landmark sees a large number of people in their 30s, 40s and 50s who are mulling a career change, or thinking about early retirement, Padgett said.

“People like the idea of seasonal work,” she said.

The rhythm of ski patrolling in the winter, raft guiding in the summer — or whatever other seasonal activities an individual might be drawn to — can seem an attractive change from the continuous monotony of some office jobs.

“We’re also getting a lot of interest from folks that are leaving the service, who have these exceptional skills in the field but are not ready to sit at a desk,” Padgett said.

Those ex-military types can find a home at Landmark, honing their outdoors skills toward a job that will provide the physical activity they need in their day.

That need to be outside, to move around, to explore — it’s something that the folks at Landmark understand.

“We’re all outdoors, we’re all expedition-minded and we’re here for the long haul,” Padgett said.

Landmark Learning has a full schedule of classes lined up for the year ahead, covering a variety of aspects of wilderness medicine. It’s important to sign up early, as classes tend to fill up.

For tuition prices, registration and a calendar for the remainder of the year, visit www.landmarklearning.edu.